Letting in The Babadook 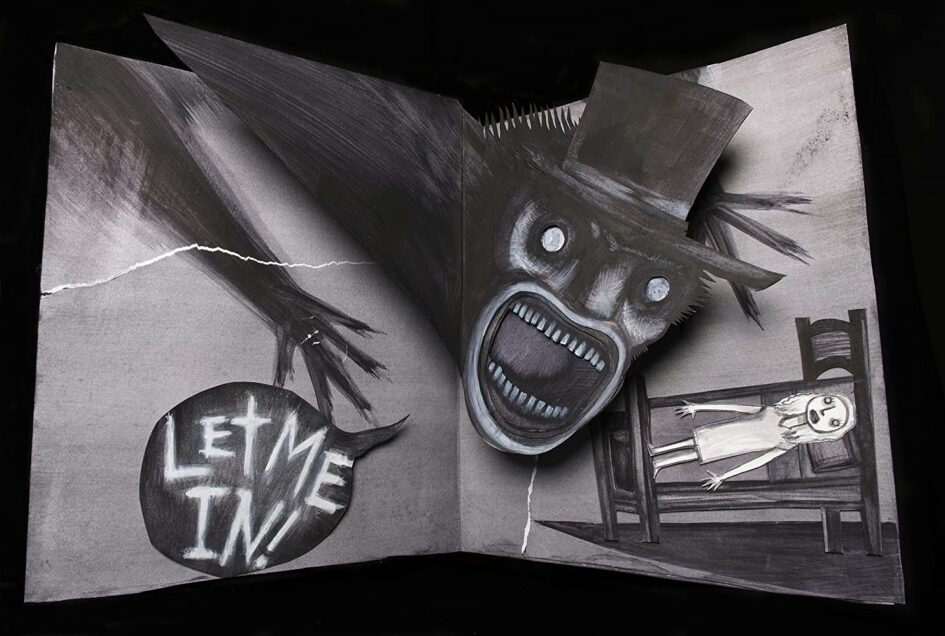 Per Matt
Interpretive horror films are the best. Sure, it can be frustrating no knowing exactly what has happened, since you never actually see the storyline play out on the screen, but it’s much better than being beaten over the head by bad writing (and direction). This is why letting in The Babadook can be such a creepy experience, as you, the viewer, could very well be the nightmare creature from the movie.

Terrorized and traumatized, the main characters of this monster movie have no idea how to combat what amounts to an urban legend or things that go bump in the night. Amelia (Essie Davis) is a widowed woman, who is mightily struggling to cope with Samuel (Noah Wiseman). Is he a problem child with behavioral problems, possessed by a demonic entity or something else entirely? Regardless, he’s smarter than his mother in how to cope with this dark presence, although he cannot cope without his father, who died on the same day he was born.

After Mister Babadook, a children’s book which mysteriously appeared in the family’s house is read, the two begin to experience real-life nightmares. Nobody believes that the main characters are being stalked and tortured, but their lack of sleep and irritability eventually affect their judgement, as this mental monster wreaks havoc. But in a spoiler-tinged twist, the main characters actually survive, while allowing the monster to live as a pet in their basement. Huh?

The Babadook is not predictable, that’s for sure, but there’s no big payoff, either. As a $2.5 million psychological horror movie, the creature’s movements is the only noticeable story element that looks cheap, which appears as cartoonish animation. Other than that, I really enjoyed watching this latest installment of My Guilty Pleasure.

Watching Australian horror movies seems to be a trend these days (don’t forget to check out Here There Be Monsters), but this one has multiple layers of storytelling. Suffering from grief, isolation and desperation, the main characters are both the protagonists and the antagonists, while the mysterious monster is more of a McGuffin. I did want to learn more about this creature, as dealing with life is definitely an intense journey for these two.

In the past, I had only heard about this movie in passing. I never noticed the memes related to it (which may have been more popular than the film itself). Despite all the online jokes, the misunderstood creature that lives within the shadows — viewed as a monster, wearing all black and sometimes stepping out of a closet — inadvertently became a figurehead of the LGBTQ community after Netflix inadvertently listed The Babadook under its “LGBTQ movies” section. Parallels to the Nightmare on Elm Street documentary, Scream Queen! My Nightmare on Elm Street, can be made, as that franchise’s first sequel features a main character struggling with his identity, much like these characters. These details from both films are highly interpretive and multiple viewings only improve their quality.

The Babadook was brought to Showtime Beyond by IFC Midnight… yet another great pairing of a highly creative production studio with a network that has continually proven to take chances on innovative films, often achieving great results. But only if you let them in.