Lightyear is All About Making Mistakes

Pixar is a name that usually puts smiles on people’s faces. While the film studio has been around since 1986, it took almost 10 years for the company to release its first fully computer-animated feature film, Toy Story (1995). Since then, the studio has produced 25 more full-length films and a multitude of shorts. In 2006, Pixar was so good at its craft that Walt Disney Studios busted out the checkbook, bringing them into the fold. By 2019, Pixar had amassed a whopping $14 billion at the box office, with four movies on the 50 Highest-Grossing Films of All Time list.

I may have been a junior in high school when Toy Story was released, but that did not stop my friends and I from heading to the theater to catch this cartoon. Before seeing the film, I was completely set on going to college and going down the path of being in law enforcement. But Toy Story changed me.

It made me want to recreate the art, style and magic that Pixar had put into their movie. So, I changed my mind and decided that computer animation was the future for me. Sadly, color blindness kept me from going too far down the path, and thus I removed the “animation” word from that career choice and just went into computers.

Speaking of the film, one character stuck out to me above all the others: Buzz Lightyear. The space ranger was lost in the toy world. He had memories of universes far, far away. He knew of adventures fighting the evil forces of Emperor Zurg. He even knew how to fly (or as Woody put it, “Falling with style”). He couldn’t get it through his stubborn head that he was just a toy.

It took a while for him to find his place among Andy’s toys. But soon, Buzz and Woody became the strongest friends one could imagine. His quirkiness and charm made him a character I loved, and still do today.

So, it is no surprise how excited I was when I heard that Disney Pixar was working on a project to tell Buzz’s story. You see, in Toy Story, Andy was excited to get the Buzz Lightyear toy primarily because he had watched a movie featuring the character. It’s like my obsession with He-Man action figures as a kid. Had I not watched the cartoon, I probably would have never begged my parents to fork out the cash for the toys. Andy had watched the Buzz Lightyear movie and did the same with his mom. It was an interesting idea for the film, and I quietly sat in excitement for its release.

Lightyear begins by confirming this film is, in fact, the one Andy saw before the events of Toy Story that made him want the Buzz Lightyear action figure. Buzz (Chris Evans) and his commanding officer/best friend Alisha Hawthorne (Uzo Aduba) land their ship (affectionately called “The Turnip”) on a planet 4.2 million light years from Earth. While exploring the planet, they are attacked by plants and giant insects.

In an attempt to escape and save the 1,200 passengers on the ship, Buzz ignores protocol and attempts to fly the ship away, only to damage it. Marooned on the planet, the passengers become colonists, with Buzz taking complete blame for the mistake. Their only hope of getting back to Earth is to create a new hyperspeed crystal. While they are able to synthesize new ones from resources on the planet, the trials have a side effect for Buzz, who takes on the task of testing the crystals with his vessel.

After many failures in reaching hyperspeed, the planet is attacked by a force of robots, led by Emperor Zerg (James Brolin). Buzz must make the change from brooding test pilot to space ranger in order to save the day. 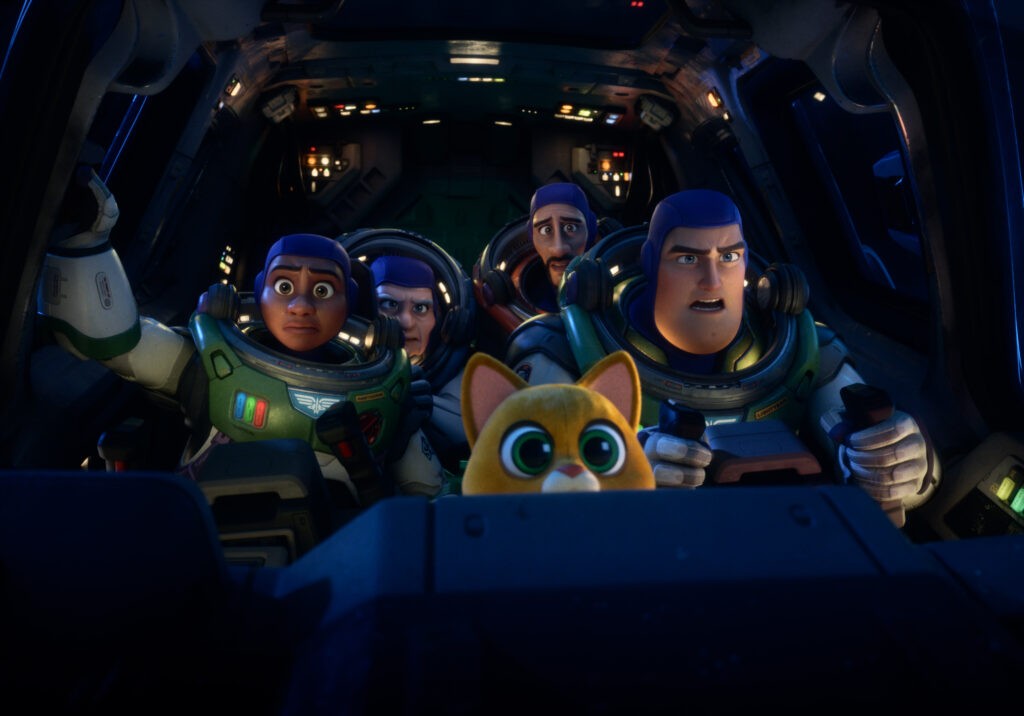 I can see Lightyear as a very polarizing film. Let’s talk about the good, first. While Tim Allen is not in the film, Chris Evans is a fine substitute. At times, I even questioned if Pixar somehow snuck Allen back into the film to do some voice work.

The animation is top-notch, something we have come to expect from the studio. And I found myself laughing quite a few times due to both comedic moments, as well as the occasional “Buzz words” (such as, “You’re mocking me, aren’t you?” and “To infinity and beyond!”). Most of the comedy was supplied by Lightyear’s sidekick, a lovable robot named Sox (Peter Sohn). However, every character had their moment in the sunshine when it came to laughs.

Lightyear does have some bad points to it. First and foremost was just how slow the film took to ramp up. After getting stranded on the planet, we watch a montage of hyperspeed crystal trials. We don’t see how the colonists built their station. We are not shown how they came up with the formula and resources to make the crystals. All we get is Buzz flying off in his space jet repeatedly, trying to break the barrier and achieve light-speed travel.

And due to the side effects, we don’t have much backstory into the friendship between Buzz and Alisha. She may be a talking point for some, as her character marries another woman, and they have a child (my little girl had a lot of questions about that one).

Not only does Buzz have to deal with his failures (while moping around in a very non-heroic way), but his crew of misfits, led by Izzy (Keke Palmer), also make mistakes and have a hard time overcoming them.

In fact, I think almost every main character in Lightyear makes a mistake that sets back their progress repeatedly. It really makes it hard for me to believe that this is the film a young Andy watched and said, “OMG! I MUST HAVE THAT TOY!!!” Buzz is just written to be such a failure that his heroics are vastly overshadowed.

Lightyear is a barely passable family film. I give it two out of five stars. Chris Evans and the cast did the best with the script given to them. The pacing is way off for the film, leaving me with more questions than answers. The battle between Buzz and Zurg was not very exciting, and the hero was flawed to the point I stopped caring.

My little girl loved the film, though, and in the end, Lightyear is made for kids. And since that is the target demo, I would say Disney Pixar has another good film under its belt with Lightyear.