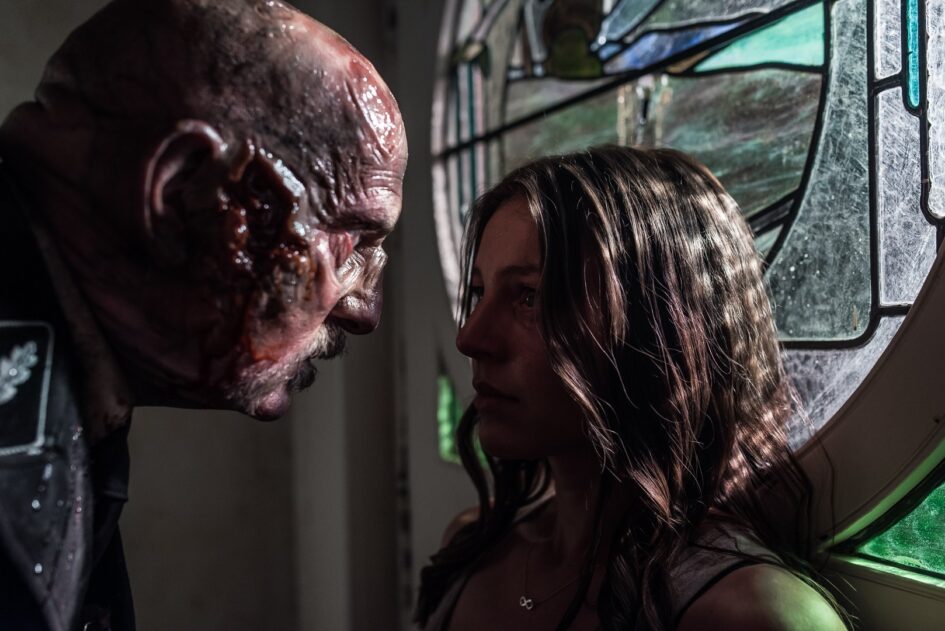 How do you like your horror films? If you think a Groundhog Day-type of storyline with a side of jump scares is your thing, then please allow me to introduce My Guilty Pleasure. Whether known as Nazi Undead or Living Space, this film deals with an unusual undead horror.

When a fighting couple stops their car in the middle of nowhere, a wounded running woman seeking help collides with it and instantly collapses. The inevitable engine troubles ensue, along with no cell service, so the American couple sets out on foot in the German countryside… during the middle of the night. Ominous music plays as the characters enter an ominously creepy-looking farmhouse and instantly a life-long belief surfaces: Never enter a house when no one’s home and the front door’s unlocked!

Despite the title(s), the primary undead menace in this movie is a family of ghosts from another era, along with the patriarch, who’s inexplicably a Zombie, while the others aren’t. Flashbacks in the guise of home videos give somewhat of a backstory, but the main event here happens when the characters relive the same horrors, over and over, until a resolution is found — that means there’s a variety of brutally bloody deaths taking place. It is cool to see the characters interact with previous plots past, but nothing is ever really resolved.

So, if Looper was a poorly written indie German horror flick with inspirations by Geto Boys’ hip-hop classic, “My Mind’s Playing Tricks on Me,” then this one’s for you. It actually feels like a Choose Your Own Adventure that’s full of nothing but bad decisions.

Instead of a Zombie movie, this is a ghoulish ghost story featuring an old house with a dark history. And it can only be assumed the film’s dual titles spring from its release in different countries. Another thing that wasn’t immediately clear was the intent of the protagonists. Was the female really acting slutty the previous night at the European hostel? Why is the boyfriend so controlling? Are these characters actually Ugly Americans or is it all dependent upon the perspective of the viewer? And how can the Zombie ghost actually interact with humans, let alone murder them to keep their “living space” pure?

So many questions, so little time.

And this portal… it is not exactly a time loop, but somehow a location loop. That’s just one more unanswered question left for the confused viewer — that is, if their attention span lasted all the way to its conclusion. If these characters can just make it through the night, they may somehow find help after the sun rises. Now, let’s help along the screenwriter for this film:

Had the movie simply been titled: Zombie Ghost, I’d be interested. Had the entire family been Zombie ghosts, I’d have been even more excited (because then there would actually be some semblance of continuity). Had there been just a little bit of information on why the antagonist became a Zombie ghost and his family didn’t, I would have REALLY enjoyed this movie. Had there been a rampant Zombie ghost with no face killer on a mad spree in Germany, now we’re talking.

But none of those options were offered and this movie, much like its script, is left undead, but with a semblance of hope for something that could have been great.