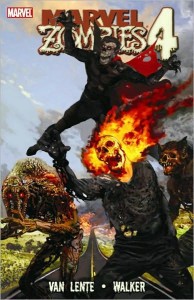 Picking up where Marvel Zombies 3 left off, Morbius has gathered a group of anti-heroes to form the all-new Midnight Sons. Their mission: Hunt down and destroy all of the undead, and stop the two creatures who started it all, before not only Earth but the entire universe is destroyed. Those two (Simon Garth and the severed head of Deadpool) teleported to the bottom of an ocean, infected the Men-Fish race, and spread the zombification disease to land dwellers via a cruise ship.

Morbius discovers the zombie plague is anaerobic, it cannot survive in oxygen. And he has created a zombie vaccine, as well. And with that, a semblance of science and logic is introduced to the Marvel Zombie Universe. That is, until the virus mutates into a superbug strain that is airborne!

As soon as all hope is lost, an unlikely alliance is formed. That, plus a little luck, some primordial ooze and a whole lot of magic and life continues for another day, as relatively normal as possible… or at least until Marvel Zombies 5 is released!

Marvel Zombies 3 introduced androids and robots as the only answer to the zombie plague, since they are immune. Part 4 introduces us to the Monster Squad, which is immune as well… but I’m sensing a pattern here. It’s clear that the majority of heroes from the Marvel Universe have already been used, but it’s pretty neat to focus on the B-squad of superheroes once in a while, to save the universe. I fear the upcoming collections will scour the depths of Z-grade talent and won’t be able to carry the storyline forward… but I’m getting ahead of myself. I’ll pluck those feathers when I get there.

Strength: These monsters actually worked well as protagonists. Surprised me.
Weakness: A whole lotta magic got in the way of the storyline. I was lost at times.
WTF Moment: The virus supercloud has a super consciousness… and Deadpool can tap into it???

Notable Quotes:
– “I figured it takes one to catch one. A monster, that is.”
– “Another convert to the Hunger Gospel. Praise be flesh without end.”
– “For the first time… even after all these years… I finally know what it feels like to be a monster.”
– “Apparently, losin’ 95% of body mass cures zombies! Who knew?