The Art of The X-Files 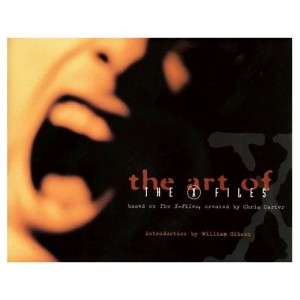 The Art of The X-Files is a coffee-table book which attempts to delve into the psyche of the TV show.

Presented by more than 60 cutting-edge artists, they give their dark and personal response to The X-Files TV show by using photos, sculptures, paintings and digital media in an attempt to interpret the mythology and their fears, with a dash of psychology. In addition to this personal collection of artwork is the artist’s interpretation and possibly inspiration. Some simply comment on the show, while others transfix with their deepest, darkest fears… mixed with video stills from the various X-Files episodes.

William Gibson gives a rambling introduction to the book, setting the mood for the reader. I must say, as a fan, no one comes close to equally stating a whole lot and nothing all, quite like Mr. Gibson. In fact, I was introduced to William Gibson via The X-Files episodes Kill Switch and First Person Shooter, both of which he co-wrote. I was so intrigued by those episodes, I ventured into the cyberspace of Neuromancer, a novel which I equally loved and didn’t quite understand. Mr. Gibson is a writing hero of mine, and one who perfectly fits into The X-Files mythology.

Each page features different artistic styles, with different backstories, but the cut-and-paste collage on page 115 was my favorite in the book. Trying to piece together someone’s dark past from snipped yearbook photos is impossible. Your next-door neighbor can be as annonymous as the stranger who may walk past you on the sidewalk. Their history may remain a mystery, just as The X-Files deals with mysteries. Do we ever get answers? Yes, but then even more questions are raised. Just like this collage.

Some of the contributors expound artistically how or why they created their art. Some discussed their own mumbo-jumbo points of view on the show’s mythology. I, however, have a different opinion. I prefer my art, just as I prefer The X-Files: Interpretation may vary upon the individual. I don’t like to know how or why something vague happened, technically. I prefer to make my own conclusions. However, I want to participate in the journey with the heroes of the TV series and subsequent feature films. And just like Mulder, I want to believe.