Meerkat Manor Rises Up For a New BBC Dynasty

Wildlife and nature documentaries have long been a favorite of mine, ever since I was a child. I was fascinated by mother nature back then, as I am still. While I no longer regularly watch PBS specials, many great series have immigrated from public television and basic cable over to BBC America, which I frequently watch — many of which are hosted by Sir David Attenborough, like Planet Earth, Frozen Planet and Blue Planet II. As a longtime fan of the Discovery Channel and Animal Planet, I know all about The Crocodile Hunter and British specials, among others, so I was especially interested in the return of Meerkat Manor as a new television series, which premiered last week.

With the return of Bill Nighy (he was the original narrator in the British series), Meerkat Manor: Rise of the Dynasty transports viewers to a “sun-baked desert in Southern Africa.” The series premiere, “New Beginnings,” personalizes wild animals of the Kalahari in this documentary show, which is a part of the Wonderstruck programming block.

In the original series, which aired around the year 2000, Flower (the meerkat matriarch) grew her family through good and bad times. That critter left a large legacy for her great-granddaughters, who are now in charge. Swift is the dominant female family member, leading the Whiskers group with its most recent arrival (her 13th litter).

The Whiskers have lived in this den and their two square-mile territory for more than 20 years. This family tree was almost exterminated via the drought of 2015. Not far away lives the Hakuna Matata Family, who are also descendants of Flower, living on a more harsh, dry scrubland. Also working their way into the storyline is the Ubuntu Tribe, who did not make an appearance in the premiere episode.

These critters are always stumbling into trouble, whether that involves dealing with a sand snake, a plover nesting site or a roving Romeo (romance for these creatures usually takes place within enemy territories). As the promo states, “Prepare for arch enemies, dangerous liaisons and shocking pregnancies…”

Can you stand the anticipation? 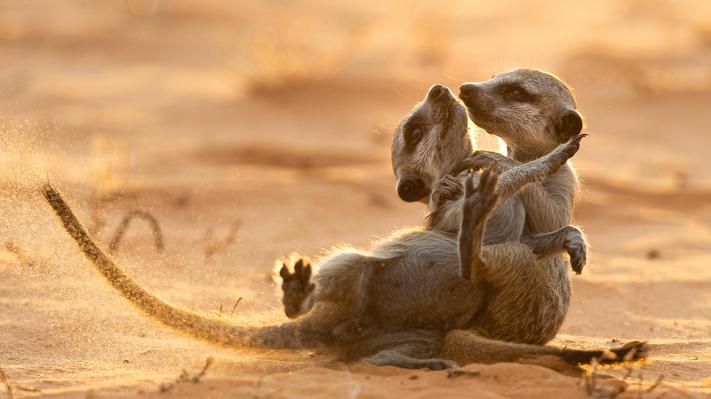 The creatures’ names are always a hoot on these type of shows, as they’re never given by Americans. To say they’re highly unusual is a given. Here, we’ve got Fly, Laika, Hachi, Pandi and Epsilon on Team Whiskers; while Finnick, Munchkin, Seneca and Flint Lockwood campaign for Team Hakuna Matata.

Keeping up with these critters is done by the radio trackers that are worn around their necks and it’s the responsibility of the entire litter to raise the young ones. I am intrigued to tune into the next episode to find out more about the missing Ubuntu Tribe. I’m also more than a little curious about a possible dark future for Swift that was foreshadowed on the very first episode of this series. That seems like a lot of upcoming bad news.

The highlights of this show are watching animals interact within their underground lair amongst themselves or with their enemies, which you would not be able to see on a daily basis in our everyday lives. It’s also special to see a trio of triplets seeing daylight for the very first time. There’s many great moments to witness on Meerkat Manor, and I’m happy this show, as a spin-off, is available to be watched Saturday nights on BBC America.