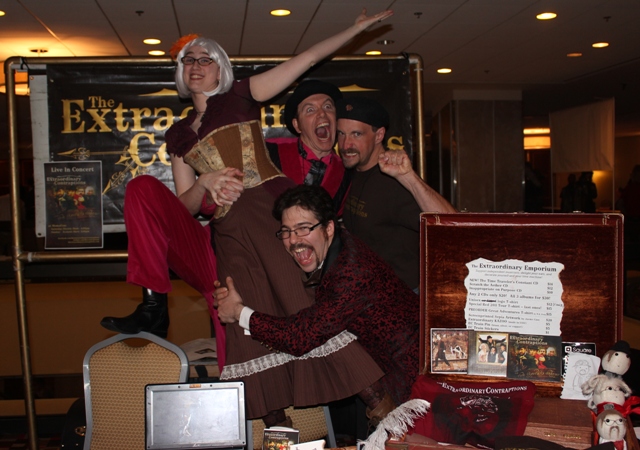 Per Matt
Recently, at MomoCon, The Extraordinary Contraptions performed multiple concerts for the anime and gaming crowd in Atlanta, GA. This steampunk-infused rock band took a break during the convention to discuss their latest trans-dimensional adventures. A lawman, a time traveler, a gentleman explorer and a mad genius combine to form The Extraordinary Contraptions. Their plan: “To alter the sound of Steampunk as we know it.”

Can each of you please tell us a little about yourselves?
– Dimitri: “I am a gentleman explorer. I was abducted at an early age, adopted by a wealthy family and educated the ways of the upper class. I studied music and I’m a Cultural Musicologist. I’ve traveled the world, seeking the musical roots of my homeland.”

– Aelus: “I’m his older brother. Once upon a time, we lived in a town called Tlemkierc. Our father was an explorer, a mental alchemist. He was trying to correct my mental imbalances with electronic experiments when an evil sky pirate shot our house and all its peoples with his electronic lightning ray and it made my brain do funny things. Sometimes, I can see the future, but not when I want to.”

– Teodore: “Actually, I’m lost. I don’t know how I got here. In this dimension, I’m a drummer for The Extraordinary Contraptions. These fellows have been nice enough to let me travel with them, until I find my way back to my dimension, my people, my beverages. I don’t know how you people drink this swill. I’m trying to make it better for you all. As soon as I come up with something, I will.”

– Sephora: “You are correct. The beverages in this dimension are absolutely nothing like my own. I’m from… well, you might call it the future, but it’s a totally different timeline. So, we’re in the same place, but a totally different space in technology. Under completely mysterious circumstances, something went wrong with my technology, and I arrived in a dimension that’s sound powered, so I figured I would search out a Professor of Music. That’s how I met Dimitri and how we formed The Extraordinary Contraptions, playing musical odysseys in order to get us back to the right place in time and space.” 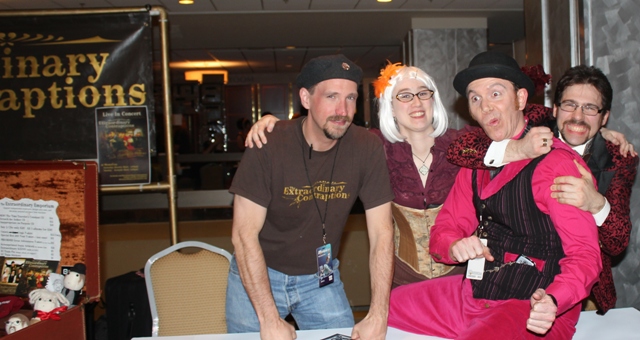 Can you tell us what we can expect from your performances?
– Dimitri: “So, we are a musical ensemble and also an oral-research collective.”

– Aelus: “And a distillery. Bent on revenge and world domination with plutonium bananas…”

– Teodore: “Not THIS world domination. You people need so many dictators, I don’t know what to do with you.”

– Aelus: “We make music and it’ll be really eclectic and full of fun storytelling about our adventures.”

– Dimitri: “We have a very high-energy show. Our time machine comes with us onstage. We have a lot of anachronistic gear and instruments that we use. Our music is very eclectic. We take various elements of style from various time periods, and mush them together to create something new and different.”

– Sephora: “Sometimes I play the accordian, but it fell into a time-vortex in New Jersey.”

– Aelus: “We love you, Jersey! Despite it all. Maybe. Give us our stuff, Jersey!”

Is everyone in the group local to Atlanta?
– Dimitri: “In this dimension, we are based in Atlanta, GA.” 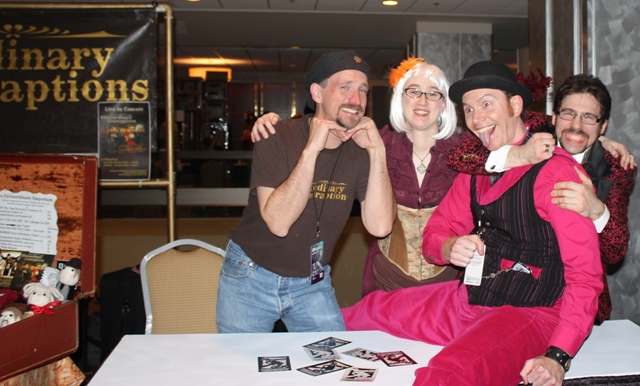 How would you describe the steampunk scene, locally?
– Dimitri: “Huge. I would say that Atlanta is one of the hubs of Steampunk culture in the United States. Atlanta, Seattle, New York and perhaps San Francisco. There’s a scene in Chicago as well. Because we are kind of the Capital of the South, we tend to have a lot of Southern Steampunks that gravitate toward us. There’s at least one other Steampunk band in town: The Gin Rebellion. A fantastic trio. I’m going to be working with them next week to record their debut album. Penny Dreadful Productions is based in Atlanta. They are a movie-prop company that specializes in Steampunk stuff. They have a whole product and storyline called remnants that has won some awards. Very impressive.”

– Aelus: “And Steampunk Boba Fett is affiliated with them, as well.”

– Dimitri: “DragonCon boasts one of the largest Steampunk contingents of any convention. They have their whole alternate-history track, which features lots of great programming, events, celebrities, bands, artists, photographers and authors.”

Didn’t your band have a recent KickStarter fundraiser?
– Dimitri: “It was successful. We were able to release the album and we’re still working on rolling out the companion material to go along with the album. We still have some previously unreleased material that we’re rolling out to our Kickstarter backers in a little while. We’re keeping real busy and using Kickstarter as a way to stay engaged with our fans. It’s been a real help for us.”

I’m guessing this isn’t the first convention you’ve performed at?
– Dimitri: “Not at all. Actually, we were the first band to perform at MomoCon. That was about five years ago. We’ve performed at MomoCon for four years. We took a year off last year. We’re excited because we have a new album…”

– Dimitri: “Speaking of, we have a pretty constant schedule of conventions that we played: AnachroCon, here in Atlanta, not long ago. We did DragonCon, this past September. We were up in New Jersey for Wicked Faire. Philadelphia for Dorian’s Parlour.”

After MomoCon, where will you be headed next?

– Dimitri: “I think we’ve got a short break, actually. We’re going to take that time to work on some new projects. We’ve got a web comic that we’re working on and music videos. Our next convention is…”

– Teodore: “The final weekend in April.”

– Dimitri: “We’ve got a new Website we’re working on.”