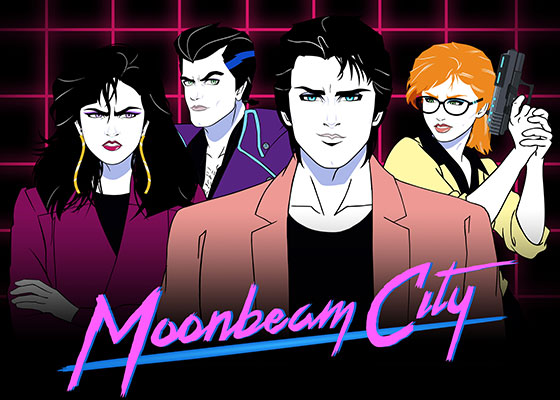 Highlighted by so many pastels and incredibly moody synth pop, Moonbeam City is much more than a parody of Miami Vice.

This new animated series, airing on Comedy Central, not only looks slick, but features a great group of interesting characters.

After unwittingly allowing the the local crime lord, El Diablo Malo, to escape justice, Detective Dazzle Novak (played by Rob Lowe) is given five days to catch the psychopath or be fired. Unfortunately for Chief of Police, Pizzaz Miller (voiced by Elizabeth Banks), Dazzle underperforms at his job, gets easily sidetracked, may suffer from A.D.D. and has terrible aim with his weapon.

Teaming up with Chrysalis Tate (Kate Mara), the two are on a mission to save the city (and possibly create some sweet music). While the storyline is simply the MacGuffin here, the real fun is in the madness Dazzle creates (along with his misguided priorities).

I’m not really sure if Moonbeam City takes place in an alternate reality (or time frame), but it really doesn’t matter. It’s a really slick show that should be given the opportunity to grow as a series.

Strength: Absurd ’80s fun.
Weakness: Surely there will be more references to the Me Decade in future episodes.
WTF Moment: Will Forte has really been busy, lately. In addition to writing and starring in The Last Man on Earth, he voices Dazzle’s ridiculous rival here, Rad Cunningham.

Notable Quotes:
– “So, I’m supposed to nap on my couch, like a dog?”
– “I can smell Dazzle’s stink from a kilometer away.”
– “I hope your brain’s hungry. It’s having bullets for dinner.”