My Guilty Pleasure: It Stains the Sands Red 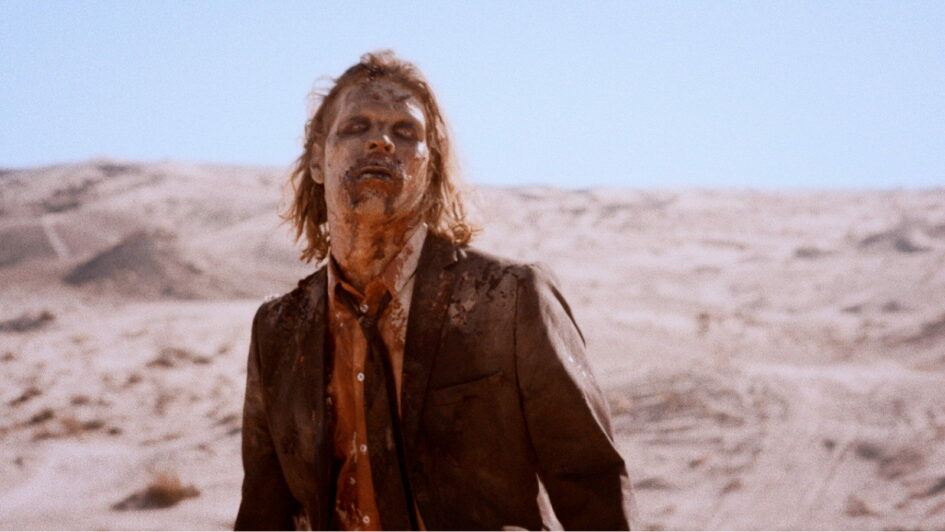 Zombies. Las Vegas. When crafting a story that involves the Zombie Apocalypse taking place in Sin City, it’s gotta have “sure-fire hit” written all over it. Right?

It Stains the Sands Red is clearly a low-budget horror movie, but it’s not exactly the blockbuster it could have been, which is why it’s my guilty pleasure.

Two stranded motorists in the desert vs. a lone undead menace. It may not sound like a gripping tale, because it isn’t. Slowly — and I do mean slowly –but surely, the story unfolds for these brain-dead characters. There’s lotsa mumbling going on and not great acting when you can hear it, but the film does address isolation and excess, which are counter-balanced by great aerial shots and terrific cinematography filming vast stretches of nothingness.

Some introspection and flashbacks to a time before the dead walked are involved, along with bad walker stumbling and inconsistencies in the finer details of the storyline — what few there are. But honestly, how many drugged-up leopardskin-pants and fake fur wearing strippers can traipse around the desert wearing ridiculous shoes while trying to follow directions on an iPhone? Molly is definitely a party girl living in an undead world.

If you like seeing a Zombie slurping on a bloody tampon, then this might be right up your alley. If you like pretty good sound effects and minimalistic storytelling, then this might be your type of movie. And if you think duct tape really does fix everything, you’re in for a decent plot device. Karma really is a bloody bitch, sometimes.

I do enjoy quite a few smaller-scale movies, and that’s definitely a good description of Sands. There’s some bad special effects scattered about, but when your main character is a stripper who’s sunburned with chapped lips but never really dehydrated while walking through a never-ending desert, it’s not the worst offense here.

More than anything else, Sands is moody and this article has more words of dialogue that the entire film, but there’s something about anticipating the slow-moving killer eventually reaching his endgame that I really enjoy. Speaking of the Big Bad, nicknamed Smalls: It’s a tough job being the villain (and sometimes the hero) without ever speaking a single word, but Juan Riedinger pulls it off.

I survived a variety of horror tropes by watching this film on a lazy weekend morning, but I thought it would be even more entertaining by employing a drinking game while watching it. Chug an adult beverage every time you can find a mistake the script supervisor missed regarding continuity and you’re bound to have a blast (as well as a few empty bottles).

I do enjoy watching many different Zombie movies, and this one has its merits, but how awesome would it have been to see hordes of walkers swarming the strip, surrounded by tons of destruction (and fallen casino towers)? Filming a local Zombie Walk could have attained this at a minimal cost, then a drone camera could have moved onto the desert, where our main characters could be found. Just a script note that could have amped up the anxiety and focused a little more on the fear level, which isn’t terribly apparent. Regardless, It Stains the Sands Red.