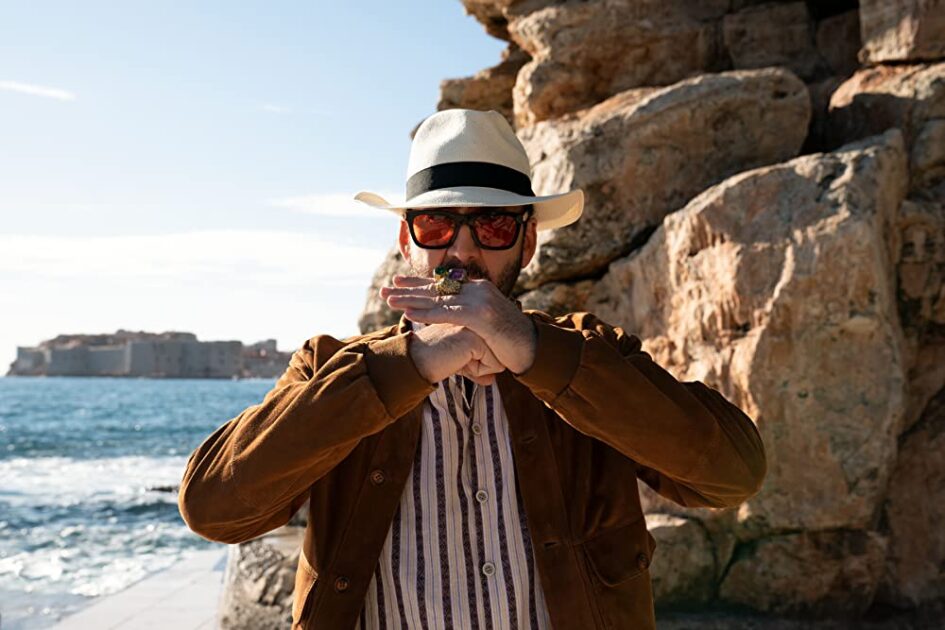 Per Matt
What’s the most accurate description of a zany, meta flick that eventually spins out of control, featuring Nicolas Cage as Nick Cage? Asking for a friend.

The first word that comes to mind is priceless, although describing something as BOTH “a zany Cage film” AND “out of control” does feel redundant — it’s accurate, though.

Sure, you may consider The Unbearable Weight of Massive Talent as yet another entry into the Rage Cage subgenre, but I disagree. In this film, Cage plays two fictionalized versions of himself, including a surrealistic version and an interpretation of a younger version who sometimes go head-to-head inside his head. It’s clear he seems to be a legend within his own mind.

While there’s not really any breaking of the fourth wall here, there’s definitely quite a bit of “inside baseball” about working within the industry (which I recognized, having lived that life for four years).

Obviously, portions of his real life seep into the script and this film absolutely speaks to Nicolas Cage’s career in Hollywood, drugs, overacting and poor life decisions, but there’s some layered storytelling going on, for sure. Along the way there’s espionage, much love given to The Cabinet of Dr. Caligari and Paddington 2, as well as an homage to his entire body of work. And that’s a lot.

Unbearable marks Cage’s 100th film role, which is remarkable for the workaholic actor (this, too, is referenced in the film).

After giving a noteworthy performance in the recent movie, Pig, Cage deserves just as many kudos here. I noticed his nuanced performance, even when he isn’t really trying, and hope he receives quite a few nominations in the process. Weight is the third film that includes dual roles for the actor (Face/Off and Adaptation are the others). I’ve long believed the other two should be included in his Top 5 films, ever.

There’s a quickie cameo by filmmaker David Gordon Green (apparently, he has a good working relationship with the real-life Cage). While it’s too late to throw the actor into the director’s upcoming Halloween Ends, I’d love to see the two collaborate on an upcoming horror film, maybe even one that eventually leads to a genre-defining franchise…

The only complaint I had, storywise, concerned the bad guys. It doesn’t make sense for any locals of Spain to speak English, whatsoever. It’s not their native tongue. Why would they? Oh, it’s just an American movie, that’s why. (Roll eyes)

Other than that, Writer/Director Tom Gormican does a noble job, here, which really means something, coming from the Co-creator of Ghosted (which I actually enjoyed watching before it was prematurely canceled).

I don’t know if there was any studio interference with his past passion project, if it had poor writing or could simply be blamed on a lack of quality, but somewhere along the line, that show fell off a cliff. The same thing DOES NOT happen with The Unbearable Weight of Massive Talent. Thank goodness!

I really enjoyed watching this feature film and think you will, too.