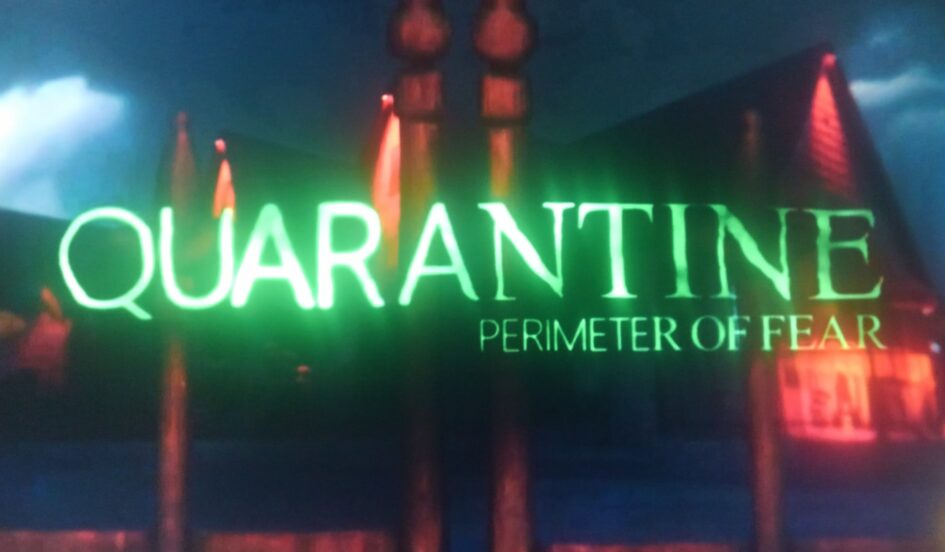 Per Matt
What happens to paranormal investigators who rile up dark entities during the high-panic and high-anxiety times of a pandemic? That’s a topic the Ghost Adventures Crew hopes to explore during the four-part miniseries, Quarantine: Perimeter of Fear.

Exploring the paranormal has been a lifelong fascination for me, ever since experiencing two unexplained events as a child. Since then, I haven’t witnessed numerous events that made me go, “Hmmm…” but I did manage to have a few more while living in California, not long ago. Looking back, maybe I should have actually invested a little money into a digital camera and an audio recorder in order to prove my sanity. Nah, that probably would have only given me more nightmares. I’m glad I didn’t.

Back in the early 2000s, two TV shows were considered cutting-edge entertainment for their time: Ghost Hunters and Ghost Adventures. Both reality programs featured ordinary people using vastly different strategies to explore the unknown. While the Hunters tried to help people experiencing strange coincidences, the Adventures Crew always seemed to be on a mission to find proof that they had found unusual evidence, no matter the means. Because of this, I have labeled them as paranormal provokers.

Both shows always seemed to get evidence that’s impossible to debunk, whether it’s feelings of cold or hot spots, getting touched, hearing inaudible sounds, strange coincidences not caught on camera and mangled sounds that are up to interpretation. Both series also seemed to milk entire shows out of not much activity, but I enjoyed watching both to learn about the haunted history of different locations.

Back to last week’s episode. With no production team to assist them, Zak Bagans, Aaron Goodwin, Jay Wasley and Billy Tolley decided to experience an all-new lockdown at Bagans’ The Haunted Museum. Their three-part investigation this week: Exploring Jack Kevorkian’s (aka “Dr. Death,”) Office, as well as his van (labeled the “Deathmobile”), and bringing all the haunted dolls (Peggy, Lilly, Gretchen, Cynthia) within the museum together, while attempting to make contact with all of them. Each of those topics seemed sound, although each person wore protective masks through the entire investigation, while muffling their voices and making them hard to understand.

For some strange reason, I always kept up to date with the happenings of Dr. Kevorkian. Getting involved with terminally-ill patients and more than 130 cases of assisted suicides led to his eventual conviction of second-degree murder, sending him to prison for eight years. Highly sensational, I always wondered about the media’s fascination with him. If someone is in terrible pain and wants to end their life, who’s to judge their decision? Or the doctor who assists them? A little bit of activity happened among Dr. Death’s previous property, but I was really hoping something strange would happen to the creepy death dolls, featuring Peggy, the heart-attack doll (because of the ailments that happen to others when near its presence) and Lilly, an 1800s doll made with human hair. Sadly, not much happened around them other than a mirror’s blur captured within a picture.

Objects are moved within The Haunted Museum. Could they somehow be linked to random and unexpected events taking place half-way across the world? What about all the dust floating among the lights? Vague answers are provided, but a cool hidden, secret room is briefly explored. To Be Continued…

As a topic, Quarantine Life of 2020 did interest me enough to watch the entire episode, although this paranormal location could have been filmed at any time of the year. It was simply available as a property that Bagans currently owns. There really wasn’t any other reference to the “fear” and “anxiety” currently felt by the entire human race while the Coronavirus pandemic is still alive and kicking.

The egging on of dark presences isn’t exactly recommended for living a healthy lifestyle, something Aaron Goodwin explained, with some friends, at a ScareFest panel in 2012. At that same event, I got a quick interview with Aaron to discuss the first-ever horror convention he’d ever attended, the artful interpretation of his nightmares and a preview of the show’s 100th episode. Overall, he’s a very cool guy. Despite that, together, they really are an overly dramatic group and after 19 seasons, they seem to really fit in well with the Travel Channel, which has basically become the No. 1 home of paranormal programming.

My days of watching weekly episodes of either series are long gone, but I do tend to check in whenever the subject matter entices me. The GAC was the first group to explore the nearby Bell Witch property (Ghost Adventures Haunts The Bell Witch Cave) and the show’s past super-sized Halloween excursion (Ghost Adventures: Ireland’s Celtic Demons) was interesting, as was a possession and demonology discussion I had with Bishop James Long, who has appeared on the show a few times, courtesy of The Paranormal Clergy.

Next week’s episode, in part, deals with possessions once owned by Charles Manson, so I might just happen to tune in.

Having seen what I’ve seen, I believe in spirits, ghosts and the unexplained, although there seems to be a plethora of chatty creatures seeking to speak, whenever the cameras of Ghost Adventures roll. That, in itself, seems quite controversial. I’d rather just watch Paranormal Caught on Camera instead.