To Be Like Bruce Lee Is To Be Water 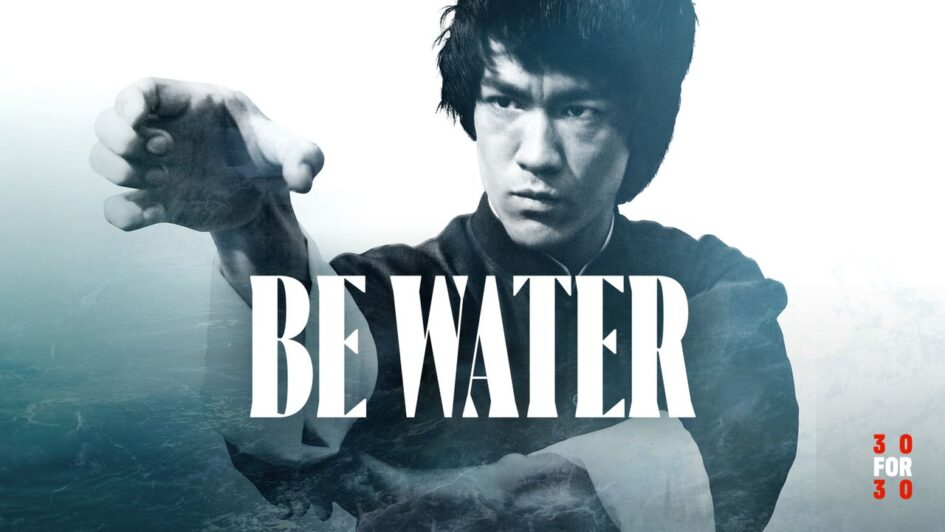 Per Matt
The sporting life — much like life in general — has been dramatically altered during this pandemic. While playing team sports have taken a backseat to just surviving somehow (with an assist from the writers of The Walking Dead), sports documentaries have flourished while so many games have been canceled. ESPN has capitalized on the situation with “Be Water,” the two-hour Bruce Lee documentary airing on the network’s docuseries, 30 For 30, which creates a parallel situation to life almost 50 years later.

As a lifelong sports fan, I tend to stay far away from ESPN’s “coverage” of documentaries. I’ve only watched a couple throughout the years, as they tend to rewrite history, being far from fair and balanced (although I did enjoy “Finding Chewbacca“). I had absolutely no interest in watching a 10-part series fluffing Michael Jordan’s ego, that was also produced by the main subject matter himself, which aired recently. I also had no interest in hearing directly from Lance Armstrong, who continues to defend his cheating ways while he raced his bicycle. I’d rather wait to watch something after the “star” has passed away, so that truth can finally be stated on the record. This seemed to happen with “Be Water.”

Bruce Lee was described as a superhero, a free spirit and a ruffian by various people, but many can agree the cult figure died way too soon, just as he was approaching his greatest success.

Born in Chinatown of San Francisco, Lee was a child star, acting in films since he was a baby. Full of fire and intensity, he had a very large personality that could not be contained. Growing up, those roles became few and far between, as he experienced bias, racism and rejection by Hollywood. As a result, in 1971, after spending 12 years living in America, Lee returned to Hong Kong, where he filmed four feature films through the next two years. These releases became cult classics in the States, building upon Lee’s mythology. Returning to America, he was seen as a novelty act by production studios. Opening martial arts studios across the country, Lee practiced meditation and the art of detachment, during a time of major social upheaval. He had big dreams and big asperations, with a major goal to show the Chinese culture to the world.

Hollywood finally took notice after seeing Lee flourish as a writer and director of Asian cinema, as he easily fit into our country’s counterculture. After making a deal with Warner Bros. to release Enter the Dragon in the U.S., Lee complained of a headache and took a nap after taking a painkiller. Sadly, he never woke up. 10 days after passing away, Lee’s biggest hit of his career premiered and he never got to see the impact it had made. Dragon went on to make $91 million worldwide, which is the equivalent to $521 million today and in 2004, the film was selected for preservation by the Library of Congress. That’s a very big deal for a film Hollywood refused to make, leading Lee to making it himself.

Multiple times in archival footage, Lee referenced that water is the softest thing in the world, but can penetrate the hardest thing, as well. Being soft and flexible against opponents was his goal, always adapting to the situation. He dealt with tragedies and racial pride gracefully. This is exactly how he lived. He made sure to insert philosophical moments into scripts, which resonated with audiences around the world.

“China had been dominated and humiliated by the West for about a hundred years… so there’s a lot of anger.”

During this time of civil-rights and human-rights protests, Lee’s lifestory seems to be released at just the right time. Much like his aim, bridging the gap was always a goal for him, whether it was gaining an equal foothold in Hollywood as a minority, or it was just living his best life.

Quentin Taratino was clearly a fan of Bruce Lee, although the topic was never covered. QT created his own backstory for Lee’s yellow jumpsuit to live on through two Kill Bill films, then he created some controversy in Once Upon a Time… in Hollywood. In a fair fight, could Lee have actually beaten Muhammad Ali or Brad Pitt, even? The world will never know, continuously building upon Lee’s tall stature.

A young Brandon Lee even makes a few cameo appearances throughout the footage — another topic that should have been expanded upon. All of Bruce Lee’s films aired before I was born, but I had caught some here or there on cable TV and syndication. I really didn’t know a ton about the actor and martial-arts fighter, but I did learn quite a bit in this doc. I actually knew more about his son, who also died way too young, than the primary subject matter. The film’s conclusion actually brought tears to my eyes and was well-done.

Now, where’s the Brandon Lee documentary follow-up that HAS to be made? Fans of The Crow everywhere demand to see it, whether it airs on ESPN or not.