My life has been a whirlwind since Momocon 2019 over Memorial Day weekend. Covering the four-day Geek Culture convention, hosted at the Georgia World Congress Center in downtown Atlanta, has opened my eyes to multiple perspectives in the convention scene. Having a press pass for exclusive panels and passes to get a closer look for photos was an amazing experience. I’m truly grateful to have gotten a chance to check it out before heading to the West Coast this summer.

With people who came from all over the country to Atlanta, GA, this year’s Momocon broke its record for attendees at over 39,000 visitors! I met truly creative cosplayers, talented gamers, soulful celebrities and everything in between. There was never a dull moment at Momocon – so many things to do that if you were bored, you weren’t doing it right! There were panels about everything and anything, like cosplaying, crafting, K-pop dancing, food, music, and of course, anime and gaming. I wanted to attend just about everything the con had to offer, so I made a weirdly obsessive hour-by-hour schedule that never went according to plan. I need to learn that rarely anything goes exactly according to plan, hah. 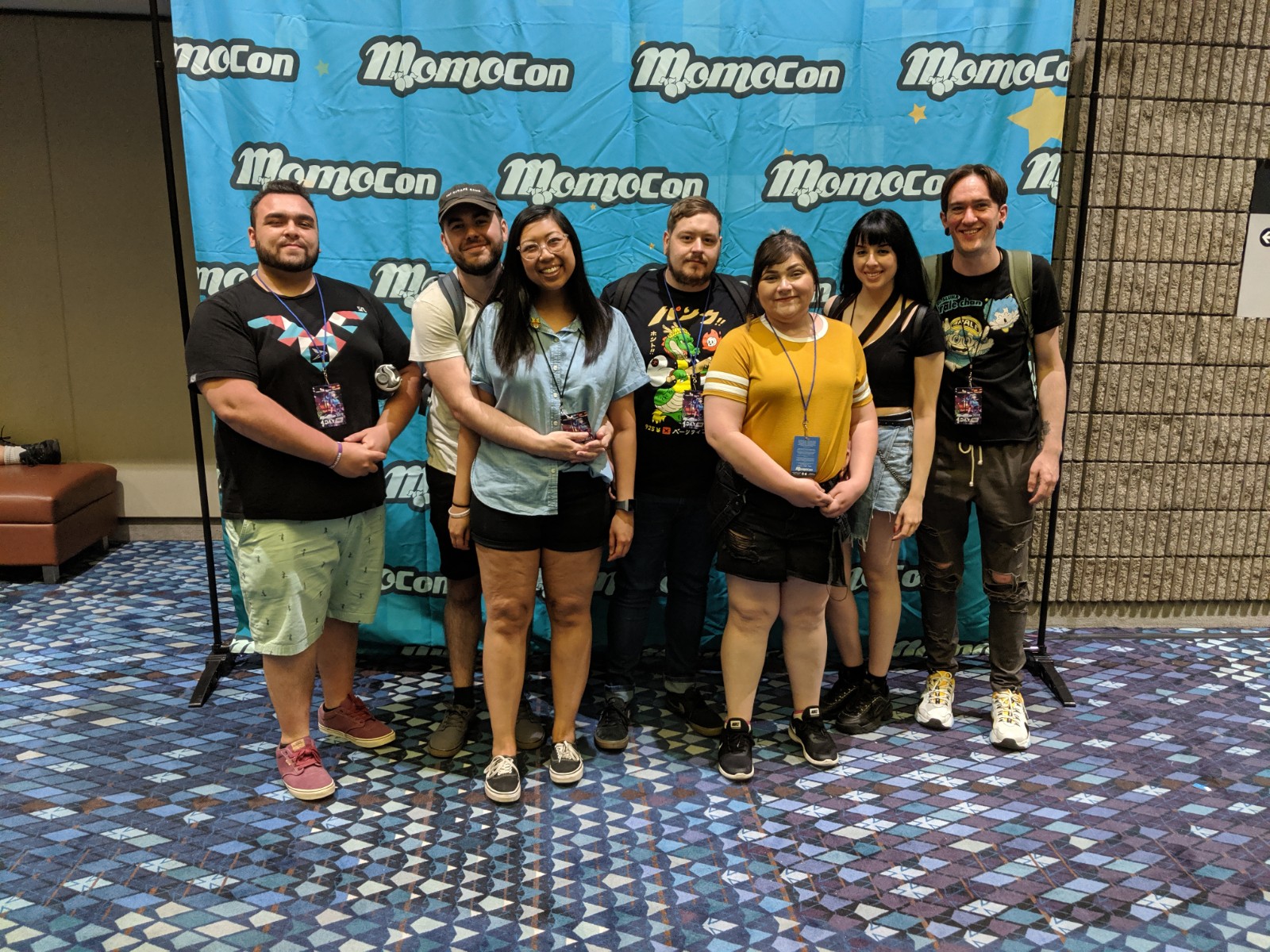 In the middle of the drive down from Nashville to Atlanta on Thursday night, my husband and I realized that we forgot our camera. ::facepalm:: Luckily, we have amazing friends who brought down an extra camera that we could borrow, and I cannot thank them enough! Along with their camera and my cell phone cam, I was able to take photos of the con at almost everything we did.

Friday was my favorite day at Momocon. The first thing we did was head to an intimate Q&A with first Kenny James (voice of Bowser from Mario) and then Samantha Kelly (voice of Princess Peach/Toad). Kenny James was hilarious. It was so great learning about how he got into acting and voice acting that it even got my husband interested in learning how to start in our local theater. I’ve done a couple of recorded acting gigs, but I would never do it live, let alone on a stage. The second Q&A was with the lovely Samantha Kelly. She was incredibly warm and caring, and it was so interesting to hear all of her different voices. I learned of Samantha’s morning radio talk show and I am excited to check that out when we get to California. 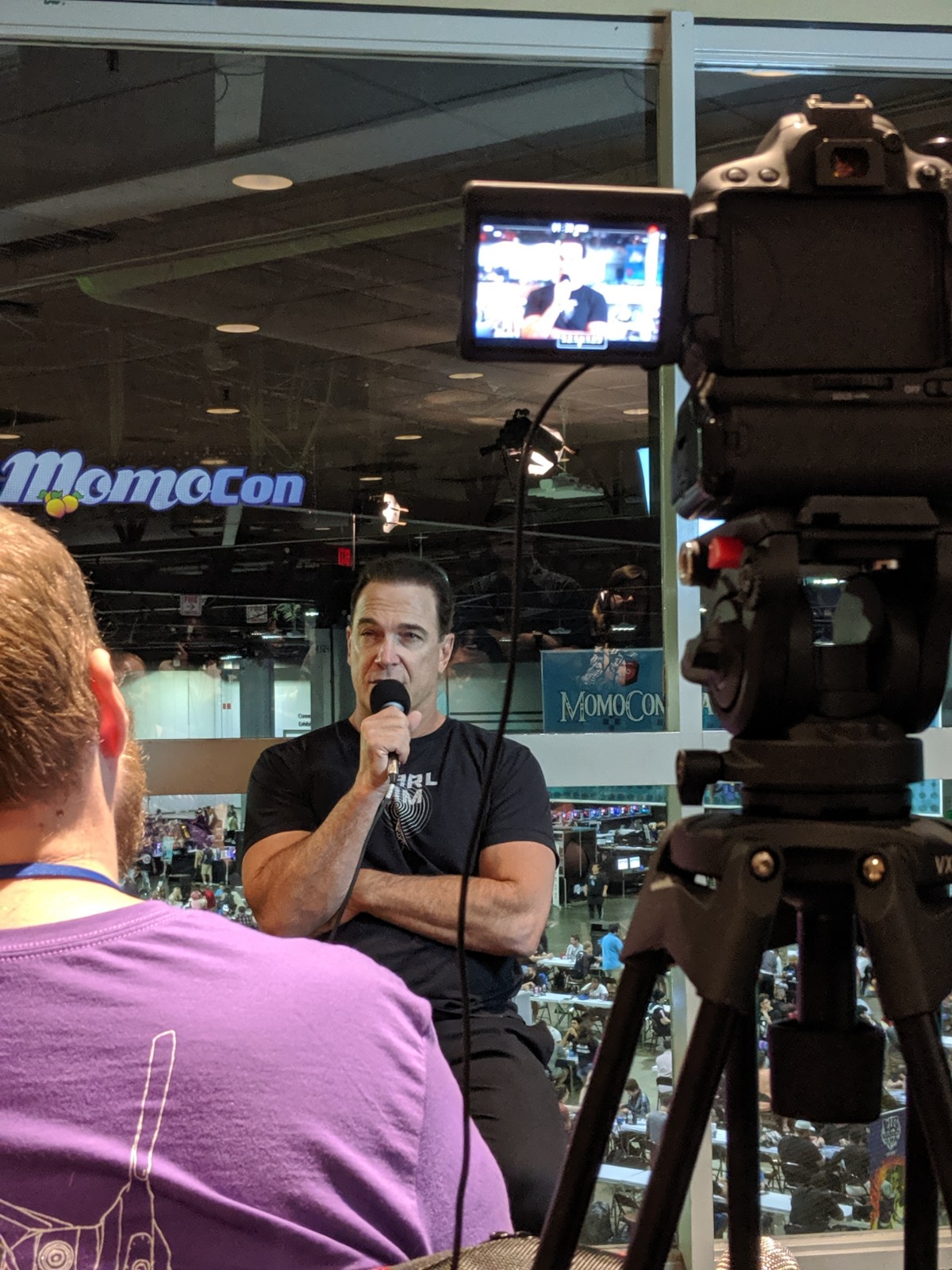 Another awesome guest Q&A was Patrick Warburton. The room was packed for this one. If you don’t know who Patrick Warburton is by name, you’ll definitely know him by his voice. Warburton voiced many popular voices such as Joe Swanson from Family Guy, Lemony Snicket from A Series of Unfortunate Events, and my personal favorite, Kronk from The Emperor’s New Groove. Patrick Warburton voiced and played other characters like Brock Samson from Venture Bros. and The Tick TV series, but I really know him as David Putty from the ’90s classic sitcom, Seinfeld. Warburton was thoughtful when speaking, and his voice soothed the crap out of the entire room. I didn’t get a chance to ask him any questions, but my favorite part of the panel was when someone described Patrick Warburton’s voice like “a boulder with a face you can kiss.” So true!

I was also lucky enough to meet Jonny Cruz and Gaku Space, the voices of Genji and Lucio in Overwatch. Listening to them talk to their experiences in the industry and what they want to accomplish in their careers was truly inspiring! You can see their full interview here. 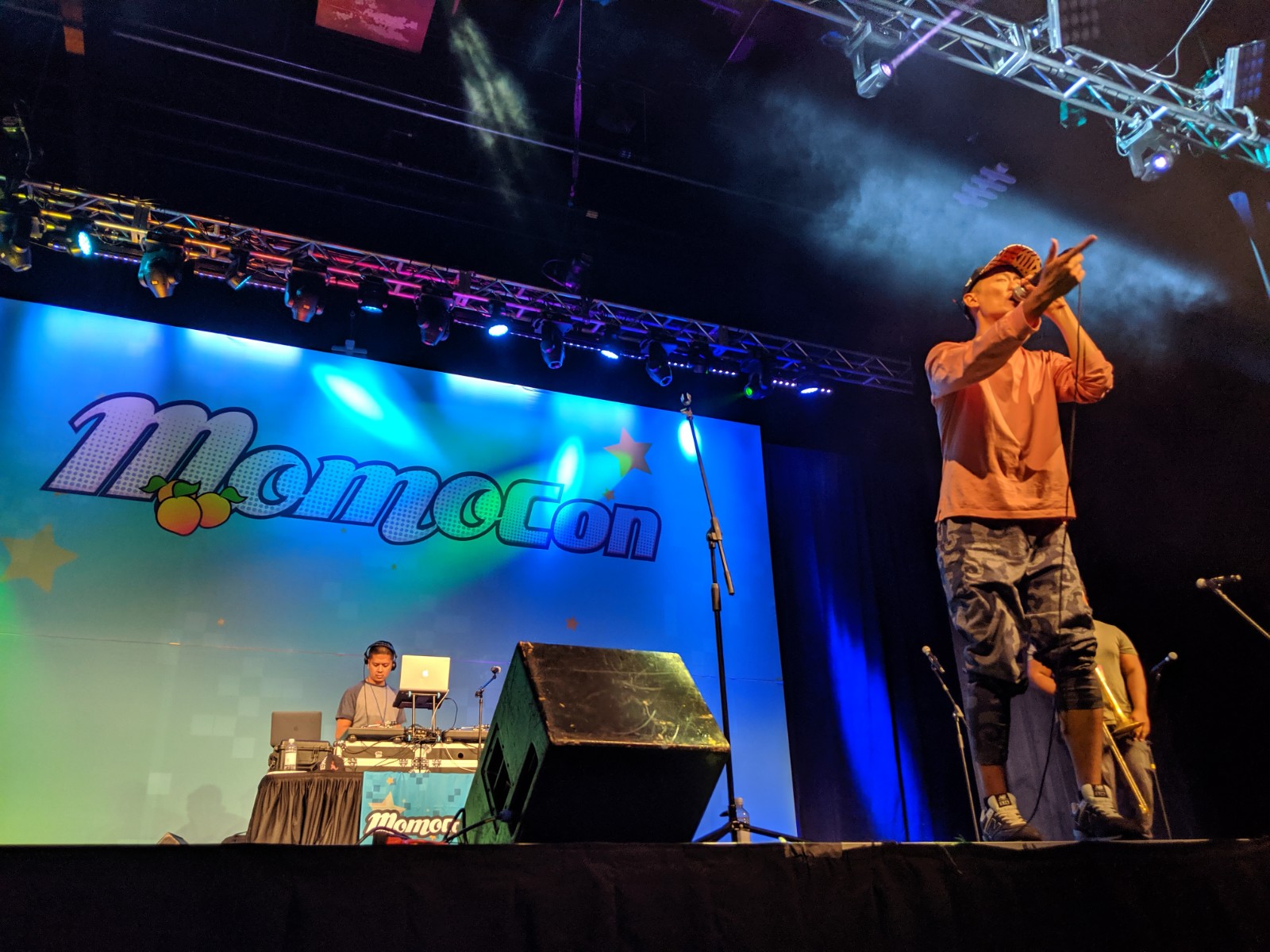 The thing I was looking forward to most on Friday was the Bytes & Beats concert headlined by Shing02. It was Momocon’s first hip-hop celebration. Other artists included Asheru, Bit Brigade and The NPC Collective. I recently got into low-fi hip hop in the past year and Shing02 is the most recent artist I heard about, even though he collaborated with the creator of this genre of music, the famous Nujabes. It was one of the chilliest hip-hop shows I’ve been to. You can listen to Nujabes/Shing02’s Luv(sic) Hexalogy here. 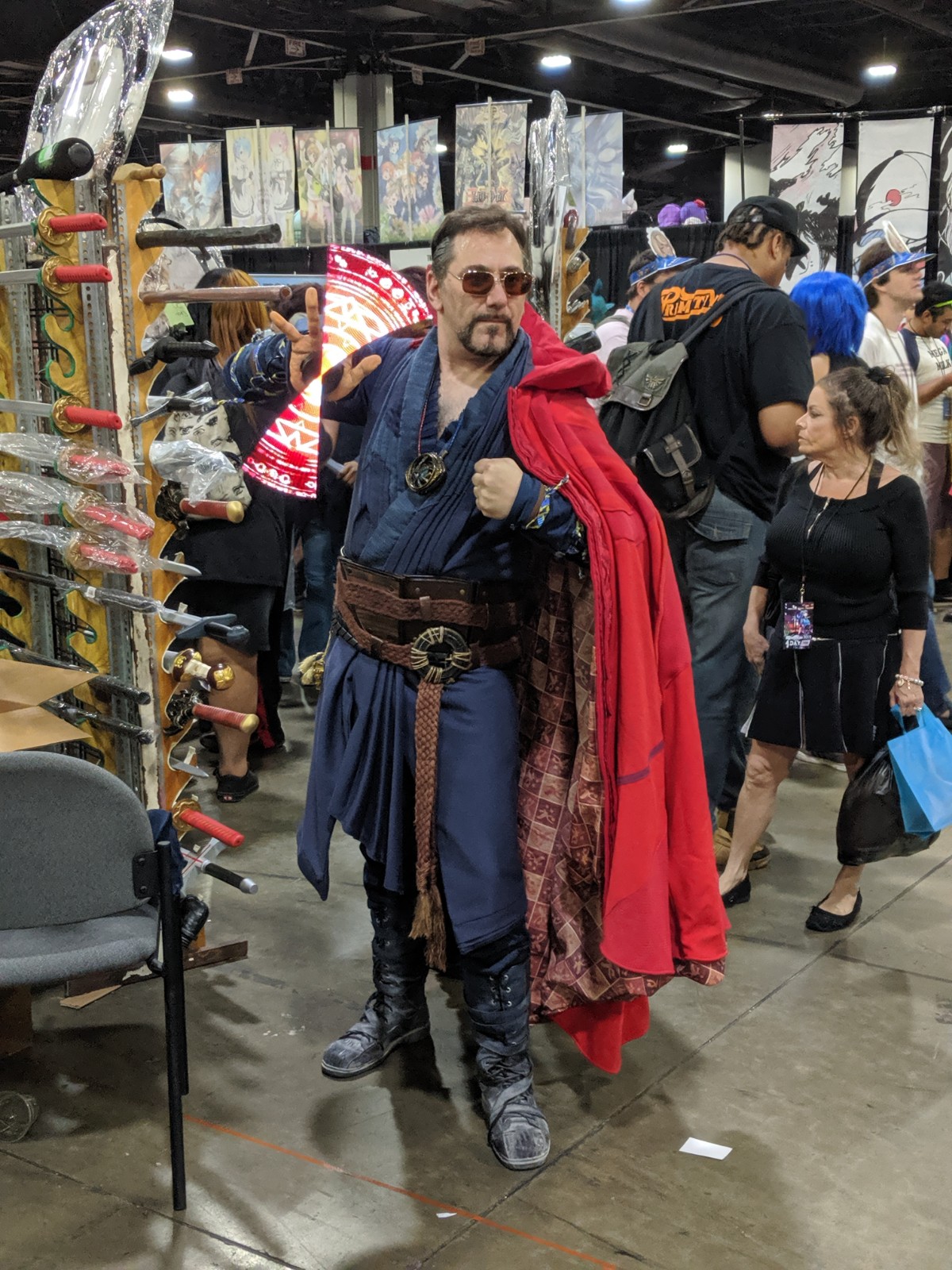 The guest list at Momocon was extensive. Musicians, voice talent, content creators, streamers, artists and others were represented at the convention. Each guest had something to offer to their fans attending the convention. Many of them even hosted their own workshops, panels and events.

As I’ve said before, I’ve been wanting to get back into cosplaying but haven’t found the time. There was a panel called “Faster Sewing Techniques” that caught my eye. This panel was Hosted by Gabi from The Gab Lab, and it was a very helpful! The biggest thing I learned was how to use large washers as weights instead of pinning sewing patterns. So simple and so fast! I am going to be following Gabi from now on.

Another cosplayer/costumer that I got to meet that I’ve been following was Casey Renee Cosplay. She hosted a panel called “Creative Streaming on Twitch” with another creator/quilter, Toni, who had very good things to say and advice on streaming on the creative channel. I don’t plan on ever streaming, but it was good to know that there is a great community for learning and helping each other out. 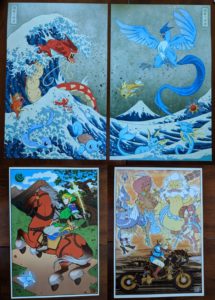 Between panels, I spent some time down on the exhibit hall floor scouting out some artwork for our new apartment in SF. Artist Alley was chock full of wonderfully talented artists. I picked up a shiny print of a piece that has different Pokémon in a Japanese Great Wave off Kanagawa. I also found these awesome Samurai style prints of Link on a horse and Link with some characters from Breath of the Wild from Sean Donnan Art. I went up and down every aisle multiple times to find these two beauties. I can’t wait to hang them! 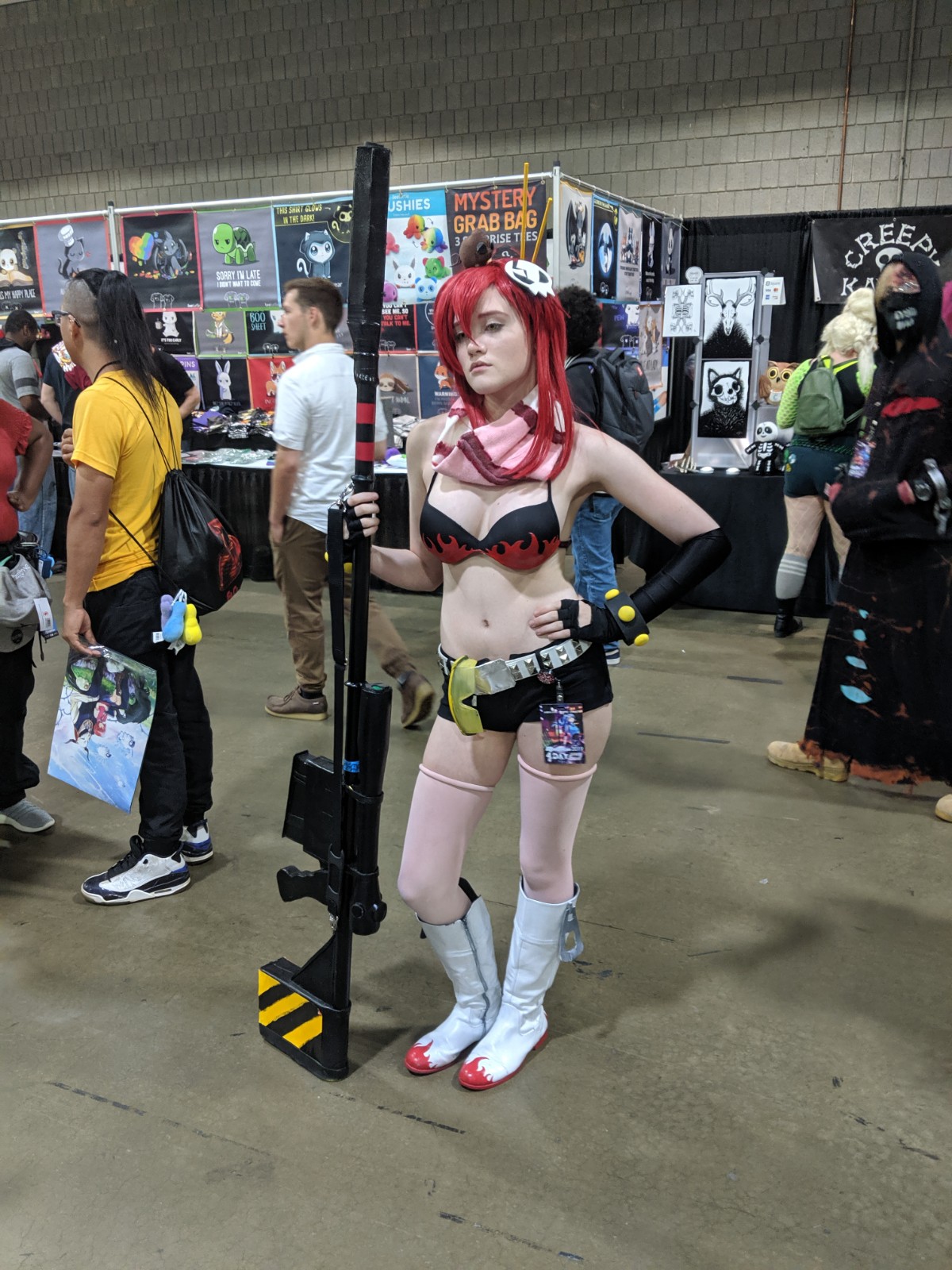 Gosh, there was just so much to do, I can’t even tell you it all. When I wasn’t at a panel or the exhibit hall, I was on the game floor watching Smash tournaments and cheering friends on during the Overwatch tournament. I also had a chance to talk to Jeremy Washington, the creator of a upcoming superhero VR game called, Justice Rises. With this VR game, you are the hero in your own story, a superhero. You can combine powers to become stronger and defeat evil. You can see our full interview here. 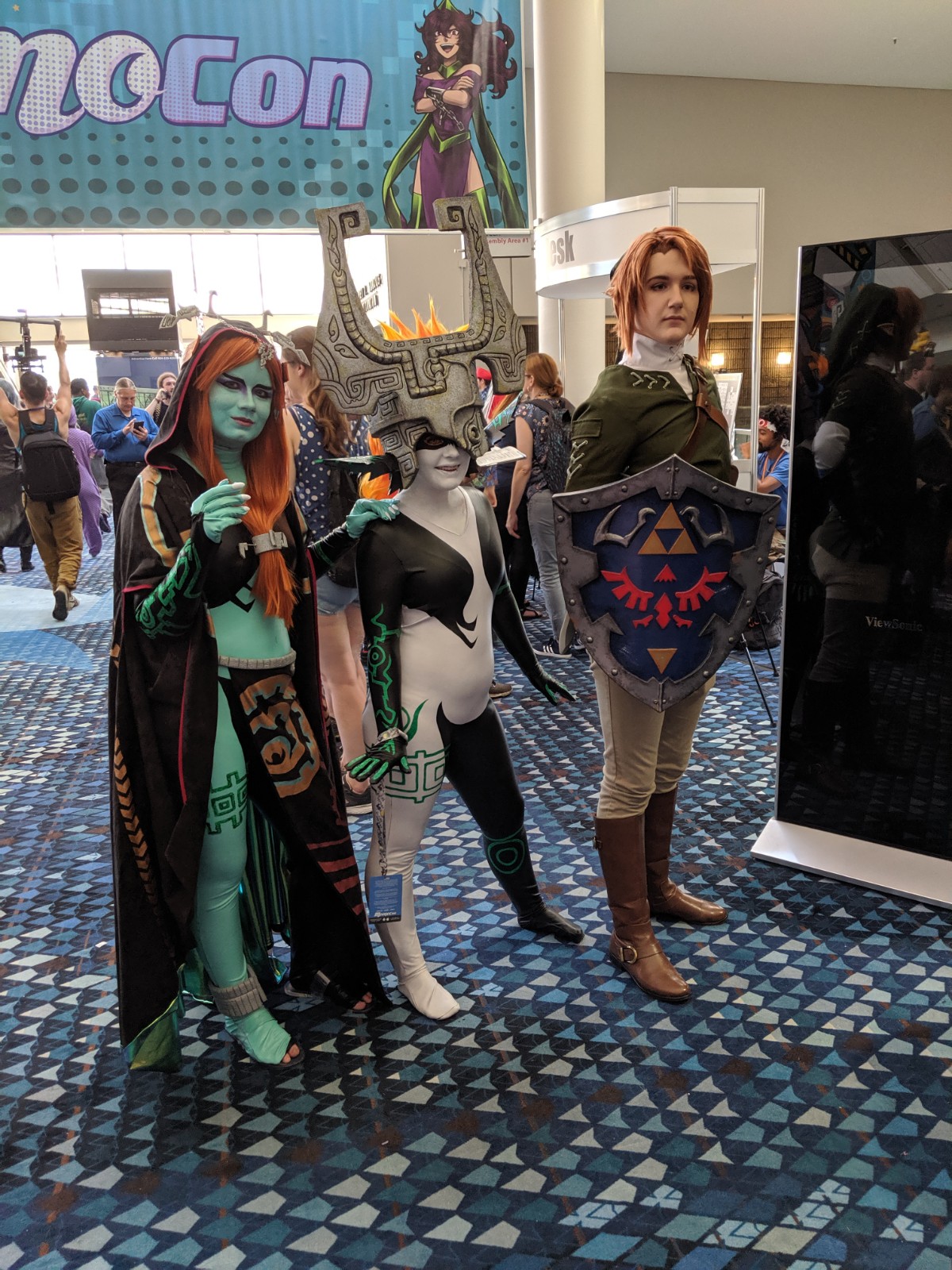 The last and biggest thing we attended was the Craftsman Cosplay Contest! There were over 100 entries and over 75 different cosplayers who went down the catwalk, showing off their amazing costumes! I picked an awesome costumer from Spirited Away as our Cosplayer of the Month. Check her out here.

I could spend hours day dreaming about the talented cosplayers that walked down the halls and who entered the contest. Check out some of the favorites below. 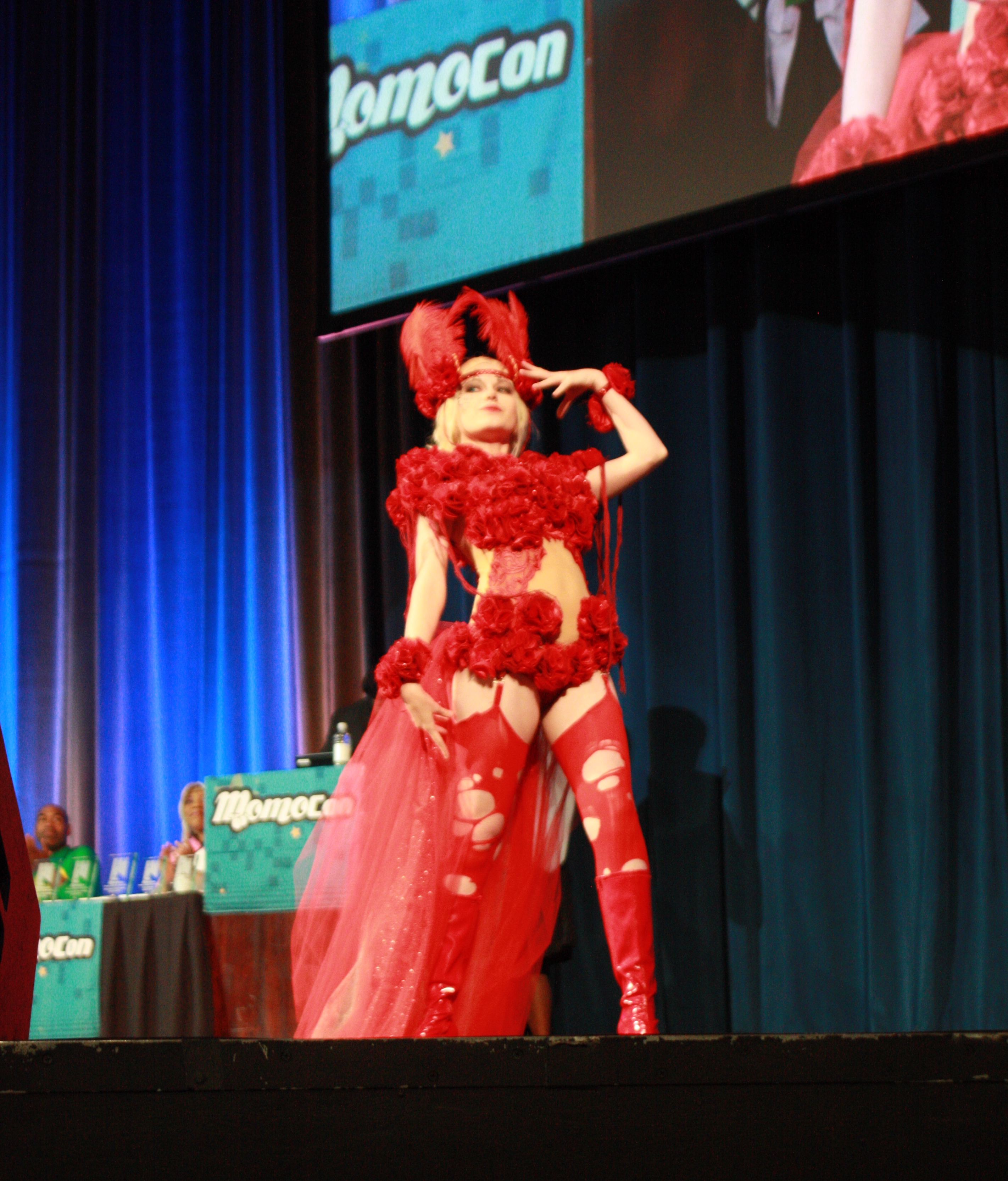 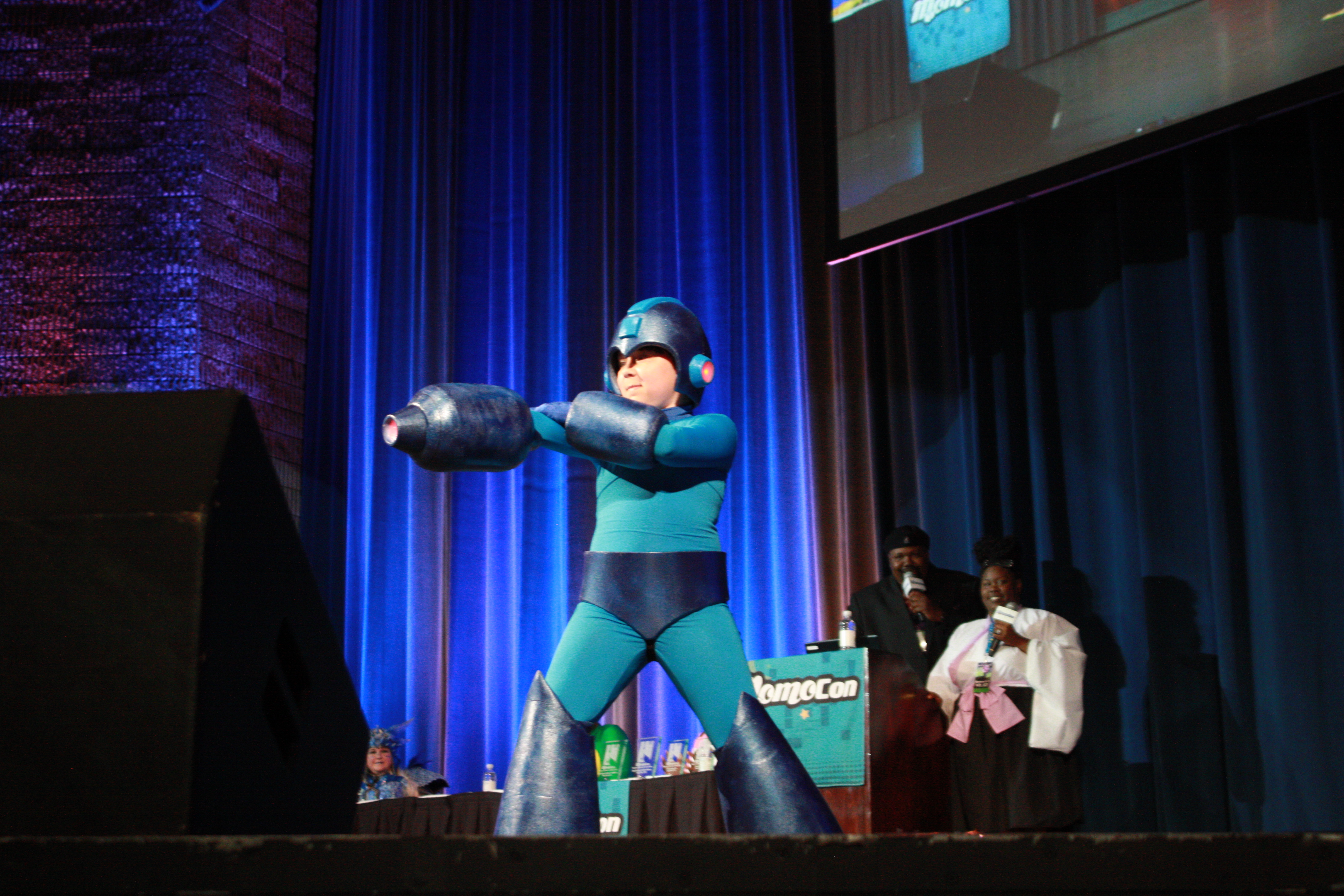 Renee Cooper, the Director of Media Relations, was a wonderful host. Hope to see you all there next year! 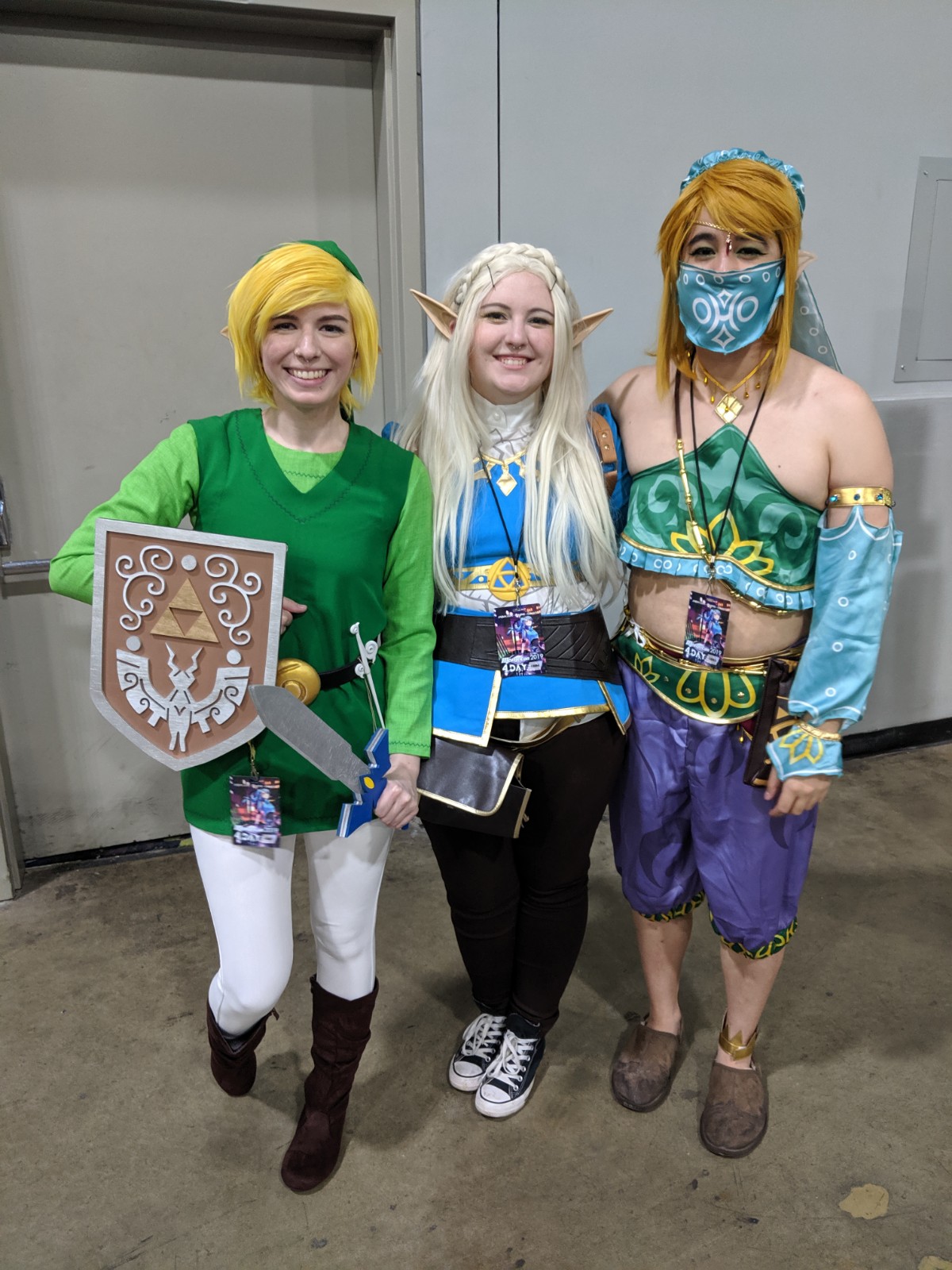