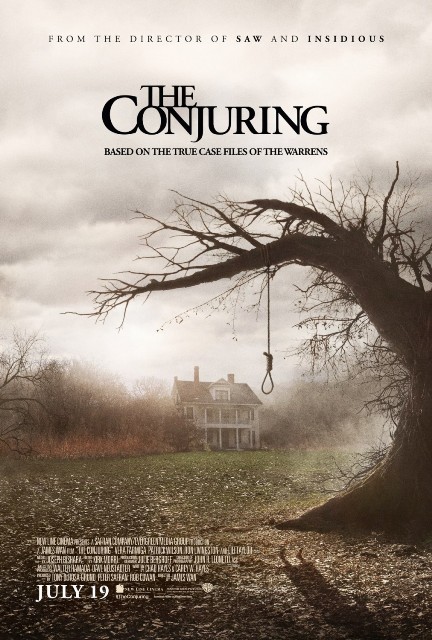 When it comes to paranormal investigators, Ed and Lorraine Warren are definitely old school.
They may very well be the world’s first pair of ghost hunters, who began working in that field during the 1960s. The Conjuring is “based on the true story” of a real-life case from The Warrens, taking place in 1971.

As soon as Roger and Carolyn Perron move their family of five daughters and one dog into a new home in Harrisville, Rhode Island, mysterious things start happening. Strange noises, cold spots, foul odors and the pet’s death are either ignored or wrongly explained… and then things start to REALLY get weird.

Eventually, Ed and Lorraine Warren (played by Patrick Wilson and Vera Farmiga) are contacted and investigate the situation and then there’s an even bigger outbreak of mysterious phenomena. Once the ghost hunters arrive and begin their old-school investigation, the movie kicks up the action a notch.

The three stages of demonic activity include: infestation, oppression, possession and they’re all on full display in this movie.

I’ve been a big Ron Livingston fan, ever since he appeared in Office Space. Livingston’s everyman character is always believable. His terrorized Perron patriarch performance is great, as always, but the TRUE gem of this movie is Vera Farmiga, who shines as Lorraine. The anguish her character must endure onscreen as a clairvoyant runs deep.

I’m now a true believer in the spooky films of Director James Wan. Although I’m not interested in his adaptations of The Fast and The Furious or Saw films, after watching The Conjuring and the first Insidious movie, I can’t wait to see what’s next, up his sleeve. And since this movie made more than $300 million in worldwide box office (more than 15 times its original production budget), there’s a very good chance for a sequel.

In fact, one of the last lines of dialogue include, “There’s a case in Long Island he’d like to discuss…”

Strength: Old-school spooks, without being belittled.
Weakness: Little, if any, backstory.
WTF Moment: This is the third collaboration between Director James Wan and actor Patrick Wilson. He seems to portray each character differently with ease.

Notable Quotes:
– “The Vatican approved the exorcism.”
– “You know you can’t shoot ghosts, right?”
– “Sometimes it’s better to keep the genie in the bottle.”
– “Demonic spirits don’t possess things… they possess people.”
– “When the music stops, you’ll see him in the mirror standing behind you.”