Per Matt
Ain’t no party like a Geek party!

Before arriving at the convention, I made a pitstop at the nearby microbrewery, Turtle Anarchy. I filled two of my growlers with limited-edition beer, including the amazing Jacked ‘O Lantern (think chocolate-pumpkin stout) and the ill-named (and unfortunately ill-tasting) Damnation (from three types of chili peppers, sadly no burn) to be consumed later that night. 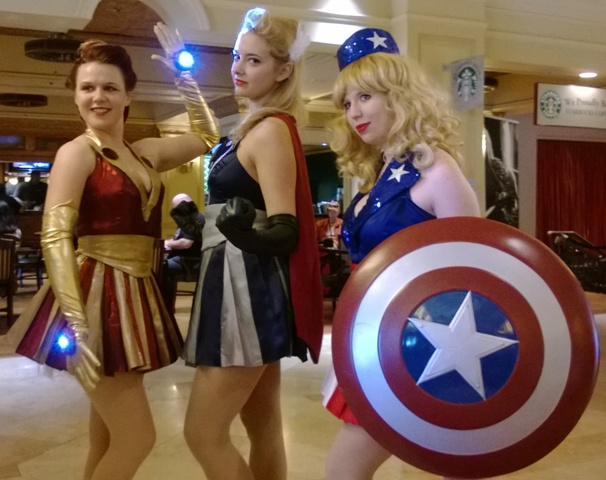 Upon checking into the convention and walking around for a few minutes, I sat down to enjoy the Geek Comedy Showcase with my fellow early attendees. Up next was the Opening Ceremony, which I always enjoy. Having the con’s celebrity guests speak for a minute or two is always a highlight. 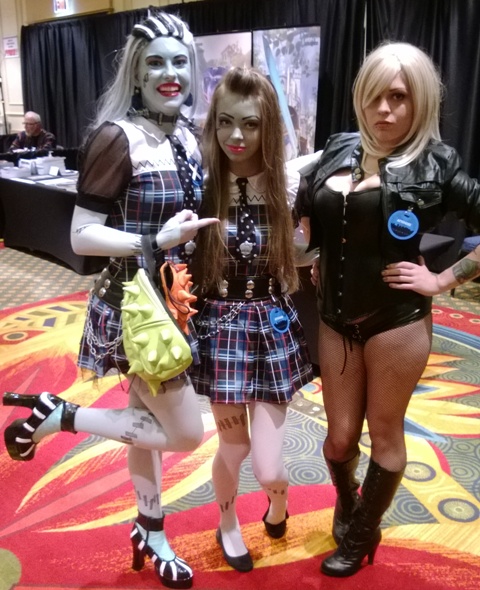 With the convention officially open, I visited the Dealers’ Room for a bit, before hitting Rob Paulsen’s Talkin’ Toons panel, where he discussed working as a Emmy-winning Voice Actor in various animated programs.

After a while, I visited Gaines Kergosien in the Analog Gaming Room. Not long afterward, it was time to party with the Nashville Geek Life crew for the remainder of the night.

On Saturday, the convention was in full swing and completely crazy. I swung by the Saturday Speaker Series to see Nashville Geek Life’s Brianna Reed discuss assisting the local geek community. Throughout the whole day was a lot of visiting with friends, slipping into panels, taking pictures of cosplayers and hanging out in the Dealers’ Room.

I really enjoyed interviewing Steve Downes, who discussed voicing Master Chief for the Halo franchise. As a huge first-person-shooter fan, it meant a lot to visit with him. 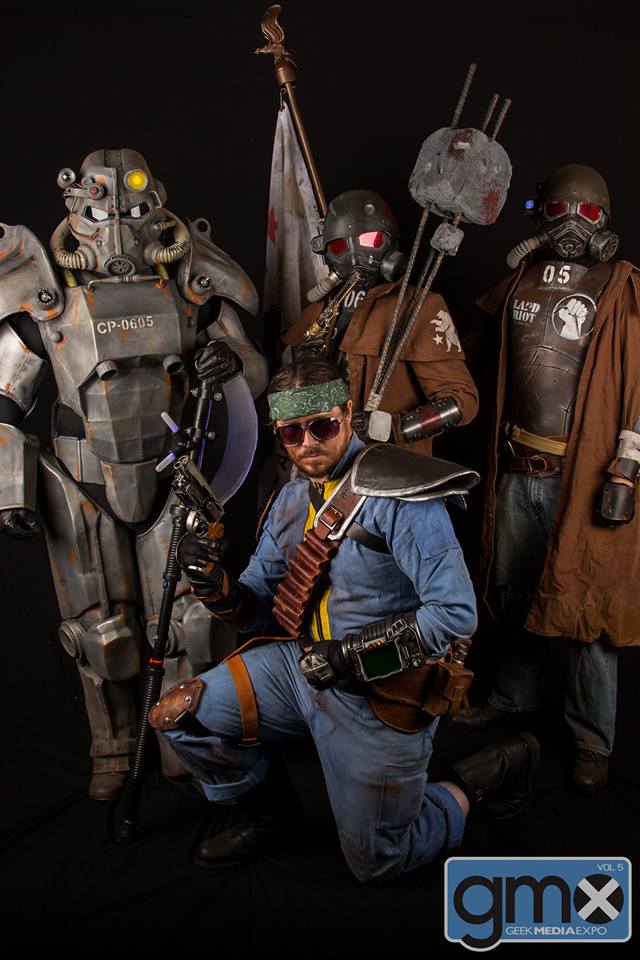 Later that day, one of the highlights was attending the $1,000 Costume Contest. The Fallout 3 group won the grand prize, but I really enjoyed the Alien and the Astronaut. My favorite of the group was the girl who crafted a costume completely out of Magic: The Gathering cards. She was robbed!

After grabbing a bite to eat, I became a first-time cosplayer. I debuted my Rick Grimes costume from The Walking Dead and got a lot of great feedback from it. Although it is not screen accurate, it is built from an actual Tennessee Sherriff uniform. It’s not perfect, but it’s a good start.

One of the little-known facts about actor Kristian Nairn, who plays Hodor on Game of Thrones, is that he is an actual DJ! So, that set up DJ Hodor’s Rave quite nicely. It’s always a blast to see Stormtroopers dancing with anime characters! Darth Vader even busted a move on the dance floor! Nice. 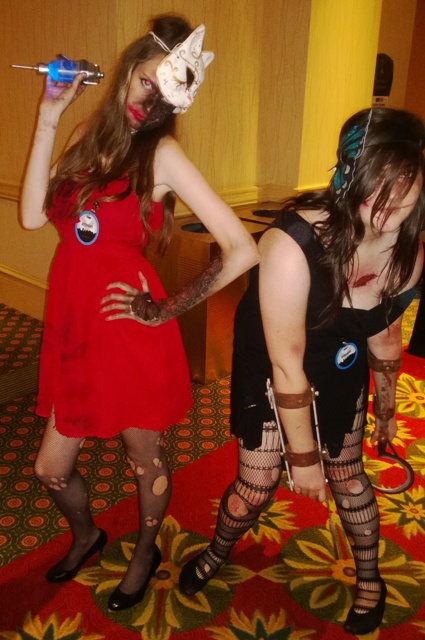 As an added surprise, I made a guest appearance in the late-night Geek Journalism panel. I was a little overwhelmed to be in the spotlight, but it was fun discussing reporting on events for the Geek community.

There was only one more thing left to do on Saturday night: Visit the Room Party Rumble! The Con Nooga kids threw an incredible bash, complete with smoke machine, laser lights, a DJ and plenty of JELLO shots! Saturday’s party seemed to last longer than usual, especially since we earned an extra hour, due to Daylight Savings time. 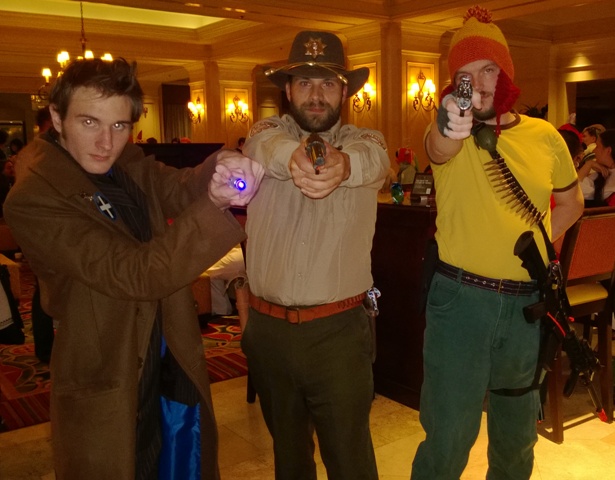 Sunday morning arrived way too quickly. I spent quite a bit of time gathering my senses and enjoying Robot Battles way too much. I always enjoy seeing metallic destruction!

I spent more time hanging in the Dealers’ Room and grabbing an interview with Chris Pope, discussing the upcoming release SpaceVenture, by the Guys From Andromeda.

Not too long afterward resulted in a great interview with Marv Wolfman, discussing Batman, The Transformers and superhero movies. 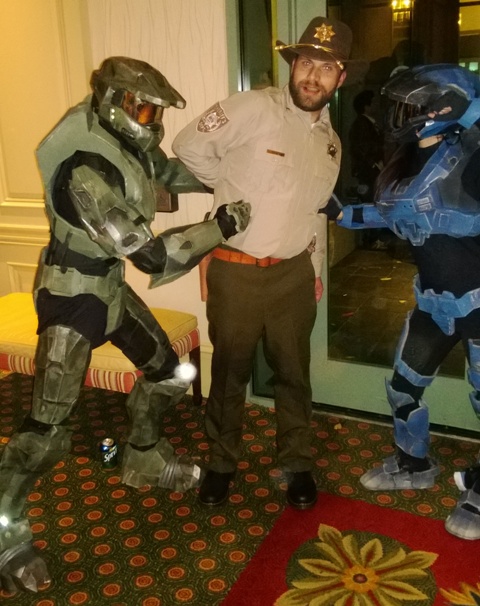 I was also interviewed for the first time and appeared on The Adam and JP podcast, discussing the convention and The Walking Dead.

The Closing Ceremonies arrived and the con closed. Overall, there was a whole lot of partying going on and a whole lot of fun for a geek. I the 2013 Geek Media Expo and look forward to attending again, next year.