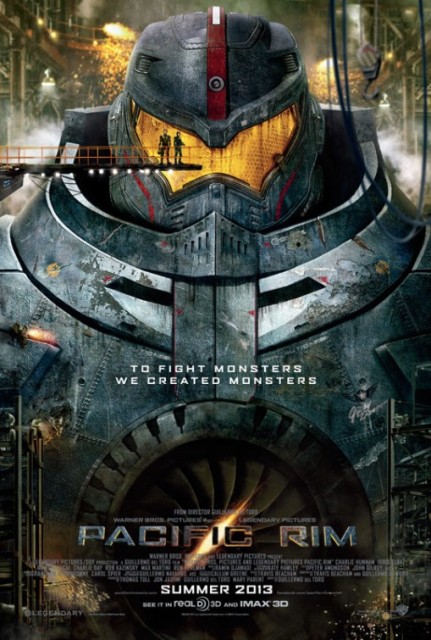 In a battle of giant beasts vs. massive robots, the survival of humanity lies in the balance.

Somehow, aliens have arrived on Earth from deep within the Pacific Ocean via an interdimensional portal and their only goal is destruction of the entire human race. Eventually, many of the larger countries of the world create the ultimate weapon, Jaegers, which are piloted by multiple people, controlling their mecha via neural handshake (aka mind meld). A multi-country battle royal ensues for the planet Earth, including citizens of Japan, China, Australia, Russia, the United Kingdom and the United States of America fighting for survival.

After a brief winning streak for humanity, the Kaiju return, having adapted and evolved with its hive mind. Unlikely heroes must step up and prevent a planetary colonization of monstrous proportions. The results are epic, to say the least.

Pacific Rim is truly an ensemble movie, with its sum greater than its individual parts. The overall performance by all of its actors is great. That being said, Idris Elba shines as the Bad-Ass Boss, along with Charlie Day as the ridiculous comic relief and Rinko Kikuchi as the true heart of the movie.

Near the end, a mandatory sacrifice must be made, and it is a tad predictable. Other than that, the storyline is great, the monsters are scary and the destruction is never ending.

Keep your ears peeled: As an Easter Egg, the computer system of GLaDOS — voiced by none other than Ellen McLain — is on loan from Valve’s video game, Portal, to make an audio cameo. And be on the lookout for a very funny end-credits scene, one which will possibly lead into a sequel. Speaking of sequels, Warner Bros. has already greenlit a screenplay for the sequel, after Pacific Rim grossed more than $400 million in its worldwide box office.

Strength: Impressive big-budget storytelling.
Weakness: A brief moment of predictability.
WTF Moment: If the pilots have a neural link with each other, why do they need to speak? They should be able to read each other’s mind.