Scooby Apocalypse: All Bark, No Bite 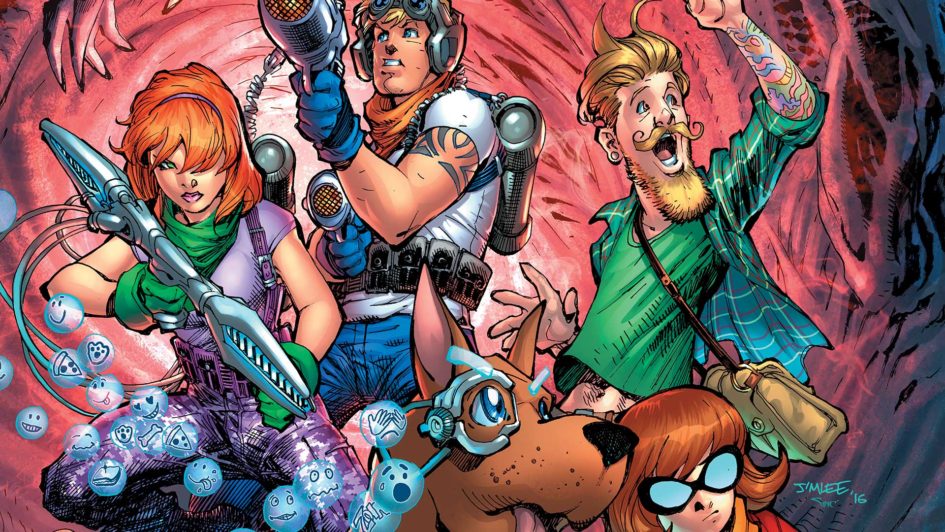 I always wondered why Scooby and the gang never took any guns to stop the monsters that plagued their adventures and now I see why.

Scooby Apocalypse is the first of many DC Comics attempting to reimagine the iconic Hanna-Barbera cartoon characters as part of their Hanna-Barbera Beyond initiative. The comic book series borrows elements from the many eras of the Scooby Doo cartoon franchise, from the earliest — Scooby Doo, Where Are You! debuted in 1969 — to the more modern series. This is not a reboot or a new story in the same universe with a modern twist. This is fresh, unique and, at times, unexpected story loosely related to the cartoon.

The beloved main characters are all there, and they are recognizable despite their modern and gritty reinterpretation. Scooby Doo, himself, is an experimental attempt at a smartdog, created by a large secret organization, which explains his ability to sort of talk. He sports augmented reality goggles that allow him to project holographic emoji, enhancing his communication. Shaggy is reinterpreted as a hipster zen-like pacifist, who works for the secret organization as a dog trainer, as he is a naturally talented “dog whisperer.”

Daphne is an investigative journalist with her own basic cable paranormal investigation show, while Fred is her loyal cameraman. And then there’s Velma, the introverted genius partially in charge of the secret organization’s experimental machinations.

Visually, the redesigns have an action-movie style. Designed by legendary comic book artist Jim Lee, each character borrows from the original cartoon designs’ color schemes and even parts of the original outfits. Velma is wearing a modern take on her orange frumpy dress, including tube socks and a turtleneck. Fred sports a bandana scarf in lieu of his iconic ascot. Shaggy has a hipster beard, complete with wax-curled mustache ends. Howard Porter’s art is superb through the series.

As fun as they are, I can’t help but feel this redesign is destined to be dated the moment it hits the culture at large, much like their cartoon inspirations, stuck in the late sixties and early seventies. 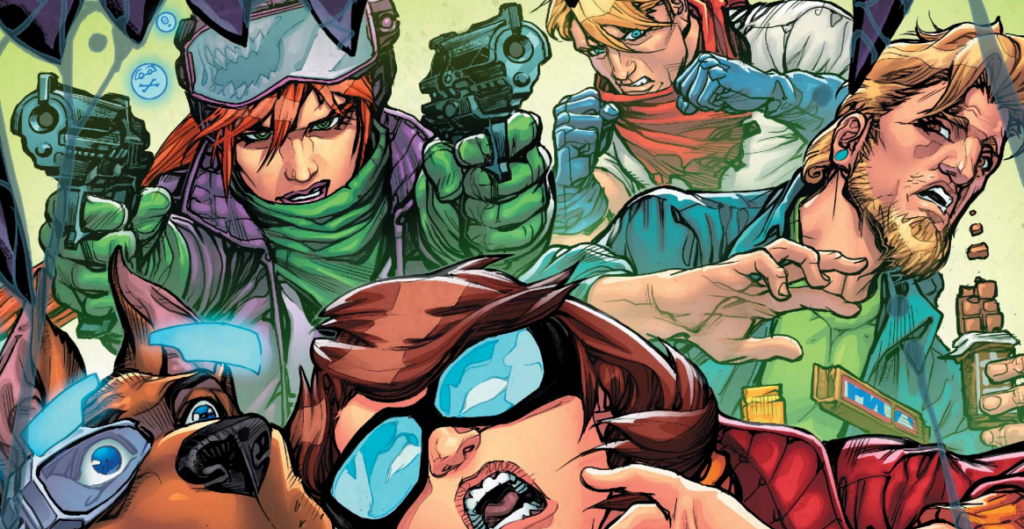 Despite the flashy appearances, the story, while coherent, is slow. The comic series takes a huge departure of the tried and true monster-of-the-week mystery fans are familiar with from the cartoon. While at the “Blazing Man” festival, Velma attempts to blow the whistle on her organization’s dangerous nano experiments to investigative reporters Daphne and Fred. Shaggy and Scooby have snuck out of the secret organization’s underground bunker for a walk and to get a bite to eat at the “Blazing Man” festival. Coincidences, rather than fate, have grouped the quintet together to secretly enter the bunker to gather evidence for the expose. And while inside the bunker, in an isolated safe room, the nano experiment goes off, transforming what seems to be the entire populace into monsters. The group now must survive the horde of what was once mankind, as they attempt to figure out what happened and how to reverse it.

Through the first six-issue volume, very little moves the plot along, outside of the initial nano transformation. It’s a series of gun-toting hyperviolent events, as the characters try to survive the newly formed monsters from one situation to the next. Character interactions are minor. There is a lingering, seething distrust between Daphne and Velma, who Daphne blames for this apocalypse. The story almost makes Velma the villain of the piece. Other than Velma, the remaining characters seem flat, used merely for background and necessity to fulfill roles predetermined from the cartoon.

The series does pay homage to certain aspects of the cartoon. The party finds a battle van dubbed the Mystery Machine. And there is a subplot involving a vicious and vengeful Scrappy Doo, as he breaks free of the secret bunker in search of Scooby Doo.

Once the novelty of seeing the reinterpretation wore off, the story felt lacking and I stopped caring how it would play out. I love the original cartoon series and I am familiar with the variations on the show, but for all the grit and violence, it lacked the sense of fun in watching a talking dog and teenage sleuths solve a silly mystery. What is Scooby Doo if there is no mystery to solve or no villain to unmask?