Seth Grahame-Smith: Master of the Mash-Up 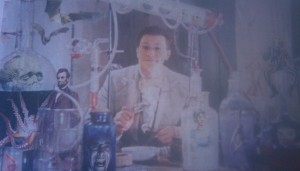 We, here at ZombiesInMyBlog.com, are a well-read bunch. We’re constantly scanning multiple magazines, newspapers, videogames, TV shows and films for the latest zombie- and monster-related news.

And for those who missed the Friday, April 6, 2012 issue of The Wall Street Journal… for shame. Because it included a Cliff’s Notes description of Seth Gramahme-Smith’s life. It was revealing. And it was great.

Recently, I did a Google search on him and found a ton of his politically themed vitriol found over at The Huffington Post and quickly acquired a sudden distaste for him. So much so, I was boiling in my disgust for any and all “celebrities” who use their sudden fame to inject politics into their writings. These so-called celebrities suddenly lose my fandom and my paychecks, because I refuse to pander to their political leanings.

As much as I was hating him, I pulled a quick 180. Seth was suffering from student-loan debt, pulled various jobs before being hired by Quirk Books and becoming a successful writer. He’s incredibly self-effacing when describing himself as a writer. Seems down to earth and has worked the old adage, “It’s not what you know, but who you know.” He’s taken it to the bank. Joining forces with David Katzenberg (son of DreamWorks Animation CEO Jeffrey Katzenberg), they formed KatzSmith Productions. Just a few of his current projects: screenwriting duties for Tim Burton’s upcoming “Dark Shadows” and Timur Bekmambetov’s “Abraham Lincoln: Vampire Hunter” and developing upcoming animated TV shows for various A-List actors.

In short, the Mash-Up genre, which he created, has become a booming business model. And I can’t fault him one bit for it (even though I still hate his politics). Consider me a life-long fan. (Just as I’m a HUGE fan of Tim Burton, who happens to be one of Gtahame-Smith’s bosses.) But please, stop dipping into the politics pool!

Noteworthy Quotes:
– “I don’t want to be the guy who turns out the light in the genre-blending room.”
– “I’m a big, bombastic novelist and a thrill-ride guy. I’m never going to win the National Book Award.”
– “The one thing you don’t think about when you’re dreaming of getting in is how scared you’ll be when you get there — don’t screw it up, please don’t screw it up.”
– “This business is so fickle. Writers come and go. Heat comes and goes.”