Slapface is the Most Important Horror Film of the Year!

Bullying is a systemic problem. When I was young, I was teased and bullied by several people. They thought I dressed funny, combed my hair differently and was a “rich, snobbish kid.” I used to dread going to lunch sometimes, as that was when the attacks were the worst.

The aggressors would sit near me, throw stuff at me and say some really mean things. It hurt, but when the day was over, I didn’t have to deal with them. I was home. My parents were loving and supportive. None of the bad people could get to me. The Internet has changed that and often invites bullies right into your home. It’s worse when the family structure isn’t there. Kids have no escape from heartache and pain.

Now imagine if you had to deal with school bullies, no parents and a semi-abusive older brother who is left with the task of raising you. Slapface is the movie that tackles this tough subject through the lens of horror.

Lucas (August Maturo) becomes the target of bullies, who pick on him and make life a living hell. The abuse only gets worse when he reveals that it’s not just schoolmates doing this, but there are also older relatives, including his brother, Tom (Mike Manning). With no true adult family members (his mom died unexpectedly), Lucas is left behind with his tormentors, full of anger and sadness.

One day he encounters a creature in the woods, who takes on a motherly role for Lucas. Heaven help those who continue to hurt him, as the creature has no boundaries. 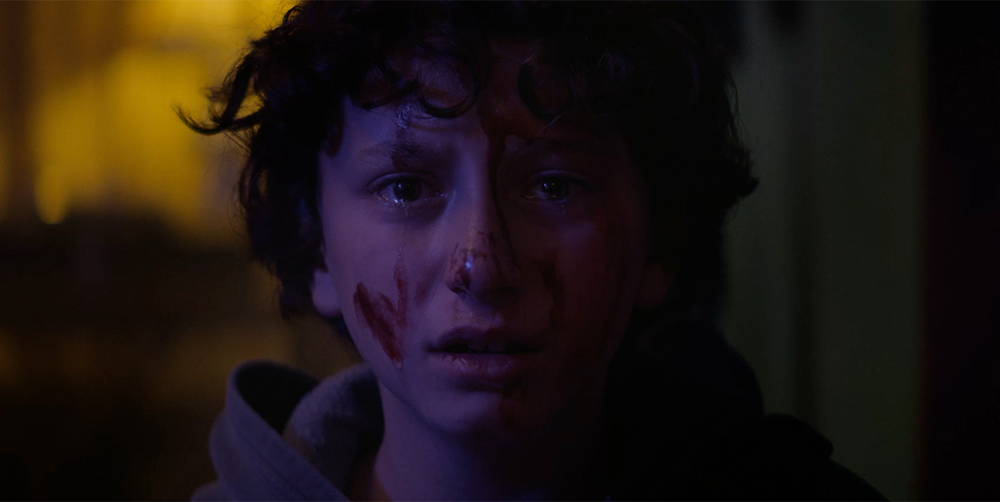 Jeremiah Kipp’s Slapface is a film that tackles dark themes like grief and childhood trauma, wrapping them all into a monster movie. With an interesting story at its core for viewers to get lost in, even with limited resources, this movie still manages effective storytelling while maintaining high production qualities, which warrant overlooking some of its rougher aspects.

It might be hard not to compare Slapface to other movies out there, but what makes it so unique are these strong emotions pulled from different angles: sadness over losing someone close and guilt due to how much time was spent without thinking how your actions hurt others. You can feel both perspectives throughout the film between the brothers.

Kipp uses a monster to symbolize trauma and abuse. The witch engages in extreme acts of protection for Lucas, but also shows a very compassionate side. In one scene, the creature enters the home and helps bathe Lucas, followed by helping him relieve some anger by destroying stuff around the house. The monster helps Lucas tackle the toughest issues in his life, such as the grief for his mom and the neglect he feels from his brother (whose way of dealing with the pain causes him to lash out at Lucas).

It is an insight plot device that will have you rooting for this monster. I even found myself feeling anger toward the bullies, all the while feeling that his brother was hurting, as well.

Slapface is an incredibly deep, emotional horror film that I was not expecting. It gets four out of five stars. Jeremiah Kipp’s amazing use of the horror genre to shed light on a serious issue plaguing the youth of today is stunning. It hits you in the face… hard. Who would have thought one of the most important films of modern time would be a horror film?

Slapface is currently available on Shudder.