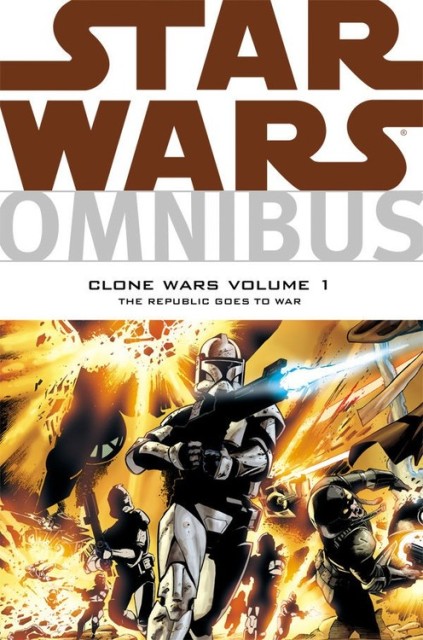 When it comes to effective, disposable weapons, nothing gets the job done quite like a clone.

In Star Wars Omnibus: Clone Wars Volume 1, these are the stories that started it all. Released after Star Wars: Episode II – The Clone Wars and before the animated Star Wars: The Clone Wars, this is a comic collection of 12 Dark Horse tales. Although they are stand-alone stories written within the overall story arcs, there’s a lot going on in these short stories.

As a relative newcomer to the Extended Universe, it took a little extra effort to get settled into the Dark Horse storytelling style. In reading just the first four pages, there are a lot of names to digest (many of which are aliases). I’m not sure which ones I should try to remember (or forget), but by the end of the first story, I was ready for more.

Apparently, the comic universe focuses more on background characters and even those that may not ever get referenced in the film canon, but I definitely recognized more than a few faces. Obviously the Jedi have been recruited as peaceful Generals of The Clone Wars (very much an oxymoron). There’s the good Generals: Mace Windu, Obi-Wan Kenobi, Aayla Secura, Shaak Ti and Ki-Adi-Mundi. There’s the rabble-rousing Anakin Skywalker, who doesn’t always do things by the book, then there’s Quinlan Vos, a Jedi soldier who works among the shadows, dangerously close to falling prey to The Dark Side. Of course, there’s more than a few fiendish bad guys: Supreme Chancellor Palpatine and Count Dooku are worked into the storylines.

As per the norm in Star Wars lore, the bad guys are always the most interesting. Asajj Ventress makes her very first appearance in this book. I liked how her revelation surprised even the all-knowing Jedi. But one of the most intriguing characters was a mysterious new enemy of the Jedi: Durge the assassin, who seems to be an unstoppable, murdering monster.

Unfortunately, there’s a TON of politics embedded within these stories. The same galactic politics that bogged down the entire prequel trilogy. Unlike the prequels, there’s quite a bit of deep-cover detective work and intrigue that the big screen would devour. Quinlan Vos has created a network of spies and eventually goes deep undercover as a double-agent for the Jedi Council. Working his way closer to Count Dooku to gain his trust, Vos is dangerously close to becoming a Dark Jedi or even a Sith.

There’s quite a few great storylines that get explored, including a group of dissident Jedi leaders realize the Republic is corrupt and refuse to fight in the Clone Wars. While they attempt to stay neutral, Ventress is sent to recruit them all… or assassinate them in the process.

The writing is fine, but the individual art styles per each story is wildly uneven. I really like the tag team work of Dan Parsons and Jan Duursema, who are in charge of the inks and colors of some of the stories. They really work well together, but I didn’t quite like the art style when they weren’t working together. For example, the initial appearance of Shaak Ti looked more like a deranged man, than a female Jedi.

I’m enjoying myself while discovering certain new characters who weren’t introduced in the original trilogy. Many backstories are hinted at, but never revealed, leaving the reader to want more information (for example, Aurra Sing). There’s many attractive women within the Star Wars Universe, those with blue skin, pink skin and purple hair, they run the gamut, both good and bad. But it seems all the great EU characters are bad guys or anti-hero Jedi, on the verge of headed to The Dark Side. I don’t care as much about the many goody-two shoes Jedi.

I hope to dig a little deeper into the EU very soon.

Notable Quotes:
– “No truth comes without pain.”
– “May The Force be with you, meat bag.”
– “You and the lady aren’t bad… for Jedi.”
– “There is no death; there is only The Force.”
– “I’ve always wanted to try my vibro-axe against a lightsaber.”
– “I will drink your fear and spill your blood and my haye will scar the galaxy!”
– “I would prefer you alive to answer my questions, but I will kill you if you insist.”
– “Why is it that every time you rescue me, you wind up needing rescuing yourself?”