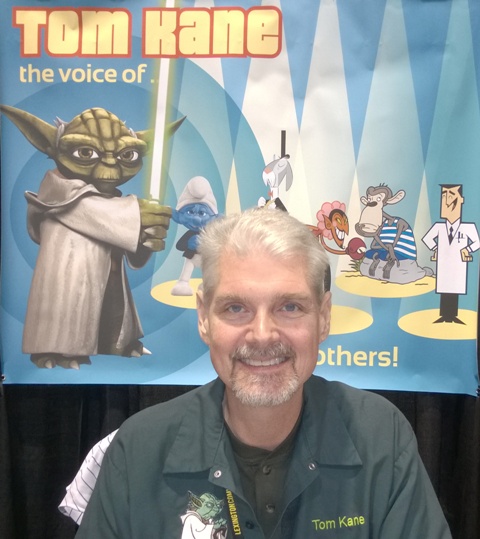 Per Matt
Within the Star Wars Universe, you may recognize the voice of Tom Kane being spoken by many different characters. You may also hear him voicing in a various assortment of projects, from movie trailers, commercials, National Geographic documentaries and even apps!

At the Lexington Comic & Toy Convention, actor Tom Kane previews the unaired Yoda arcs from Star Wars: The Clone Wars, drops hints about appearing in Star Wars: Episode VII and the upcoming series Rebels. He even imagines a Yoda Zombie!

Acting work can sometimes be a year-round job. Do you get many opportunities to attend conventions?
– “I attend about six a year. It depends on the convention’s schedule. Most of them start on Fridays and I average three to five recording sessions a day. Most of that is for movie trailers. They don’t wait. It’s really hard for me to leave town on a Friday. That usually kills a lot of possibilities for conventions, because they want you for Friday, Saturday, Sunday. I would like to do more. Maybe when I get older and things slow down a little bit, I’ll be able to get out of town a little more often.”

You’ve voiced many great characters in TV shows and movies. Can you estimate how many characters you’ve worked with?
– “That’s a good question. I don’t know.”

Any idea how many TV shows or movies you’ve worked on?
– “You know, I used to keep track of all the individual things I’ve done: promos, TV commercials, radio commercials, National Geographic documentaries… I stopped counting about 10 years ago. At that point, I passed about 20,000. I’ve probably passed 30,000 now. It’s ridiculous.”

Do you have a home studio?
– “Yes. You can’t do five recording sessions a day if you’re driving from studio to studio, certainly not in Los Angeles, because you’ll spend more time on the road than you will in the studio. All the movie-trailer guys — which is the majority of my day-to-day work — have recording studios in our houses.”

Have you done any voice-over work for downloadable apps?
– “I’ve done some Star Wars stuff. They’ve had me do Yoda and C-3PO for Garmin. I think they charge $9.99 to download their voices. There’s actually a wonderful video that’s a behind-the-scenes recording session with Darth Vader and Yoda. It’s pretty funny.”

For Star Wars: The Clone Wars, you’ve voiced many characters in addition to Yoda.
– “On Clone Wars, I’m the opening Narrator, I’m Admiral Yularen and miscellaneous droids. The main characters, on any series, do a lot of smaller parts. One of the oddities of the Screen Actors Guild contract for animation is they can have you do up to three voices, for the same feed.”

What’s the current status of the unaired final season of The Clone Wars?
– “They made a deal with Netflix. All five complete seasons are available on Netflix, as of about two weeks ago. Part of the deal, I believe, is they finished up 13 episodes of Season 6, which we recorded the entire season. I think we recorded a few (episodes) of Season 7. That was a year and a half ago, at this point. We didn’t think any of that would see the light of day. To have any episodes, at all, get completed is a real bargain. We’re very happy about that.”

Could you tell me about the rumored Yoda arcs?
– “Four of (the unaired episodes) are what they called the Yoda arcs. I think there was more Yoda in those four episodes that were ever spoken, put together. You get to see Yoda in a way that you’ve never seen him before. He’s vulnerable; he has doubts. There’s a few moments in one of the episodes where he’s clearly terrified. Basically, he’s up against the very source of the Dark Side. It’s a match for him, in some ways. For all of his incredible wisdom and powers, he is mortal and he has vulnerabilities and fears, just like everybody else.”

Didn’t you voice Yoda in the LEGO Star Wars movie?
– “Yes and there are ongoing episodes of The Yoda Chronicles airing. I think they’ve aired four of them and we’ve got two or three in the can. We’ve got four or five more that we’re going to do, that I know of.”

Did you have any roles in The LEGO movie?
– “No. I think they had Darth Vader in there for a second or two, but they really didn’t have any Star Wars characters in that. Had they had Yoda, I would’ve done that. They didn’t, unfortunately. Maybe if they had Yoda in there, it would’ve been a good movie. (laughs) It was actually an excellent movie. My kids loved it. I was actually jealous. Man, I want to be in that movie. (laughs) It’s the same guys I worked with on the other LEGO movie, so maybe I’ll call them up and tell them to put me in the next movie.”

Have you been approached to work on Rebels?
– “I know Dave Filoni and I just saw him a couple of weeks ago. I gave him some crap about putting me in there, somewhere. He says he will. They’ll probably plug me in as a droid or some kind of an Imperial officer or something. They’re really trying to separate it, not just from Clone Wars, but from everything else, as well. They really want Rebels to be a different view of the events that took place in the movies. So, they’re trying to present a completely different side of that, with characters and locations we’ve never heard of before.”

“As Dave puts it, ‘It’s a big freakin’ universe, so let’s explore some of it we haven’t seen before.’ I’m sure there will be some established characters that will show up, at some point. I can’t imagine at some point you won’t get a glimpse of Vader or Boba Fett doing something, but I doubt they’ll do that early on. That’ll be something they’ll probably do in later seasons, as sort of a treat. I’m joking with Dave, because knowing him, somehow he’ll manage to will work Plo Koon in there somewhere, because that’s his favorite character.”

Is there any possibility you’ll be appearing in Episode VII?
– “Oh, yeah. Actually, I’ve already talked with the guy who’s in charge of the voice-over stuff for that. I suspect I’ll end up being a character, of some kind. Maybe a droid or two, who knows? Yoda, obviously, in that timeframe, is dead, although that doesn’t really stop Jedi from showing up.”

You have voiced many characters, but have you ever been a Zombie?
– “I’ve done a lot of things, but I’ve never done a Zombie. That actually got me thinking, ‘What would it be like, if Yoda was a Zombie?’ Obviously, he wouldn’t have conscious control of anything, anymore, but would he still have some of the Force powers? That’s perhaps fodder for a comic book, somewhere. That was an intriguing thought.”