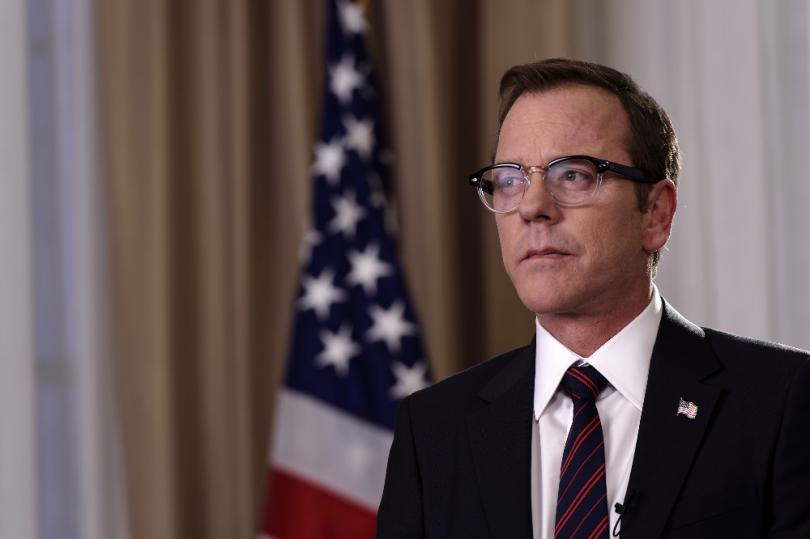 No longer protecting the President, Kiefer Sutherland transfers from CTU and into the White House in Designated Survivor.

Sutherland maintains his political intrigue — even if he is no longer an action star — as 24 gets rebooted without him later this year. His new TV series, broadcast on ABC, features the actor in a familiar setting: Washington D.C. During one frantic day, he gets demoted from his plush position as Secretary of Housing and Urban Development, but after an attack on the Capitol during the State of the Union Address, he soon gets promoted to Commander In Chief of the United States.

“This is really not how I saw today going.”

Following the presidential line of succession, Thomas Kirkman gets sworn in.

“You are now the President of the United States…”

After assuming command, Tom gets overwhelmed in the War Room, later vomiting from the pressure. This is definitely no Jack Bauer. Wearing goofy glasses (which, as a prop, I actually like), his character isn’t instantly transformed from an unassuming, more relatable everybody character and into a powerful, take-charge figure, but he is believable. How would you react if your life was dramatically transformed and you were basically given the most important job within the entire planet, all the while millions of people rely on you for support during a traumatic event? How long until President Kirkman takes control a la Bauer? TV audiences may not give the wishy-washy character much time to mold into a decisive, powerful figurehead.

Apparently located within an underground location near the White House, Kirkman addresses the American public, deals with an attack on U.S. soil, calms a trigger-happy General looking for revents, carefully pushes aside a nuclear football that he recently obtained and copes with his drug-dealing teenage son all within a small timeframe. To say he’s out of control and in over his head is putting it lightly, but he deals with an Iran tense moment like a boss. If there are more moments like this, the TV show should prove quite successful.

Maggie Q is featured as an FBI Agent who has worked previous explosive situations, hoping to solve the unsolved mystery: Who did this and why? Kal Penn is a speechwriter who unknowingly insulted Kirkman, but must now work for him. Talk about a whoops moment.

In a post 9/11 era, the good guys have their hands full hoping to uncover the bomber’s identity. Will there be a possible second attack on U.S. soil? Tune into Designated Survivor tonight for the second episode in order to find out!

We’re huge fans of Kiefer Sutherland and thoroughly enjoyed his previous efforts on 24, so we’ve got high hopes for Designated Survivor. Instead of never-ending moles magically popping up, military and political leaders may be aiming for Tom’s job in this new series. Will there be endless conspiracies involving him? We’re hoping that whatever drama revolving around his character is more believable (and enjoyable to watch onscreen) than some of the late-season antics on 24. But if any mountain lions show up, we’ll quickly delete this must-see show from our DVR!