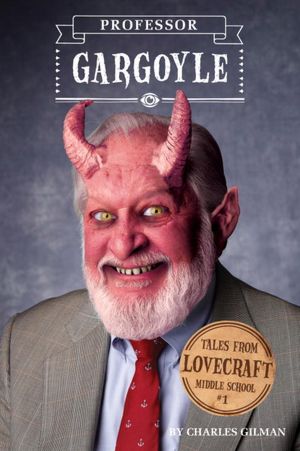 What happens when your best friend is a double-headed rat, fellow classmates practically disappear daily at your school and there’s more than meets the eye to your science teacher?

Welcome to the Seventh Grade.

Robert Arthur is the new kid at Lovecraft Middle School. After his neighborhood is redistricted, Robert is sent to the brand-new, state-of-the-art facility with more than a few mysteries surrounding it. Robert knows no one at his school but the local bully, Glenn Torkels. After a series of odd events, including an attack by a locker tentacle monster, the two unlikely friends pair up for an investigation into the paranormal.

Throughout the book, Charles Gilman addresses key factors of the Young Adult audience: being alone, starting a new school with few friends, dealing with a bully, having a single-parent family who’s not very involved in their child’s life… and then there’s the unresolved wild swarm of rats infesting the brand-new school. Mr. Gilman successfully had my full attention throughout the entire book, which is a fun and easy read.

Elements of fantasy are sprinkled throughout the book, although I was truly hoping for a little more. I realize this is just the introduction to an entire series, so hopefully there is more to come. There is magic, spells are spoken, a possible undead mad scientist pulls the strings from a parallel dimension, and a main character may be a ghost. Comparisons to Harry Potter and Poltergeist are made, but overall, this feels like a different story altogether.

Even though I don’t fit the demographic for this book’s target audience, I really enjoyed it. And the Pictures are nicely drawn, as well. I also really enjoyed the lenticular cover. Bravo. Ultimately, Mr. Gilman raises more questions than answers, and hooks the reader into wanting more.

And more you can have, since Tales from Lovecraft Middle School #2: The Slither Sisters, was just released! Be on the lookout, I’ll review it soon.

Notable Quotes:
– “Robert knew middle school would be strange, but this was ridiculous.”
– “Glenn had been collecting the dweeb tax for part of fifth grade and all of sixth.”
– “Pets weren’t allowed on school property and wild two-headed rats couldn’t be trusted.”
– “Fizzy green goo bubbled out of the wounds like a strange toxic sludge.”
– “There are forces in this world we cannot comprehend. It is wrong to question the wisdom of the Great Old Ones.”