The Addams Family Gets an Animated Makeover at the Box Office

The Addams Family has been a staple in the “fun and whimsical” sitcom genre as long as I can remember. As a kid, I was first exposed to the kooky family by watching Scooby-Doo, in which the family made several cameos. When we finally got cable TV, I was able to catch reruns of the live-action show in syndication. I fell in love with the whole concept: A creepy family of horror tropes trying to make it in the real world, while still holding onto their haunted heritage. It was comedy gold, which is why the family is still seen in TV and film almost 60 years since the original show aired. For its time, The Addams Family was somewhat unique, with only The Munsters to compete in this scary sitcom space.

By contrast, kids today have lot of “friendly monsters” in their shows. Disney’s Vampirina is a vampire kid whose parents moved from Transylvania to Pennsylvania to open a bed and breakfast, the Scare B&B (an obvious play on the Air B&B business model). Netflix has Super Monsters, which portrays monster preschoolers. And on the big screen, we have had films like the Hotel Transylvania series, The Nightmare Before Christmas, Coraline and Corpse Bride. All of these shows and flicks show the dynamic of how monsters would interact in the human world. It humanizes monsters, and shows they are just like everyone else. Quoting the theme song from the aforementioned Vampirina, “I may be blue with pointy teeth… but I’m no different underneath. It may seem strange but it’s true, I’m just like you.”

With the saturated field, any new film coming along needs to bring in something strong to the table. It has to differentiate itself from the crowd. It has to be new and fresh. Unfortunately, we know Hollywood doesn’t seem to know how to do “new and fresh” anymore.

The Addams Family is a 2019 updated animated makeover of the 1960s TV series. Having to flee from their homeland due to an angry mob, Gomez, Morticia and Thing make their way to New Jersey. Finding a giant mental patient named Lurch, they return him to the abandoned asylum he escaped from. Instantly falling in love with the building, the Addams move in and start their family. Years later, the area around the house is taken over by a planned housing development run by Margaux Needler, who is obsessed with being famous and controlling the lives of the people in her town.

Margaux cannot stand the individuality of the Addams family and their home, thus offering to completely makeover their house for her TV show. During this time, Wednesday Addams becomes friends with Margaux’s neglected daughter, Parker. As their friendship grows, Wednesday convinces her parents to allow her to go to public school, which leads her to questioning the strict, anti-establishment mindset of her mother. And Pugsley Addams is coming of age and must perform the Mazurka, a choreographed fencing routine to show that he is ready to grow into manhood. However, Pugsley is woefully inept with the sword, despite the help of his father and Uncle Fester. 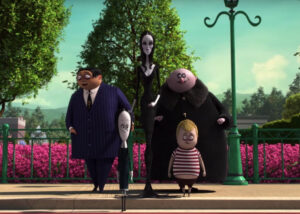 While the film touches on many different storylines, it seems to run out of time wrapping them all up. It’s understandable, as cartoons are typically focused on kids who don’t have a very long attention span. The Addams Family only has 87 minutes of run time, and the writers tried to cram in way too much. They open with the marriage of Gomez and Morticia, followed by their escape to New Jersey. Then you jump forward 13 years. Somehow, without their knowledge, the housing development is created. Then we rush through Gomez and Fester trying to train Pugsley, Wednesday becoming best friends with Parker to the point she runs away, Margaux turning the town’s residents against the Addams family, and the entire extended family coming for the Mazurka. The film glosses over all these story arcs, just giving a very shallow amount of time to them. It water downs the whole movie.

With such a diluted story, you would think they would have at least written some funny or intriguing dialog to try to add something to the film. And they tried, but failed miserably. While a few moments in the film elicit a chuckle, most of the jokes are outdated or purely groan inducing. At times, the dialogue is so predictable, one could find themselves saying it before the characters. Even the iconic phrase “You rang” grunted by Lurch in the TV series fails miserably in this remake. The powers that be behind The Addams Family decided it was better for it to take at least 10 seconds for him to complete his two word sentence. Instead of being funny or at least nostalgic, it was annoying, akin to nails on a chalkboard.

Had the producers decided to focus on fewer stories and given us something new in this day of abundantly funny and lovable creatures, The Addams Family would have been a great throwback to the ’60s series. But sadly, it just fell into a rut of being “just another cartoon about scary things.” Aside from the name, nothing felt right. Thus, I give The Addams Family two out of five stars. Maybe if there is a sequel, they will cut down on the number of plots and flesh out their characters more. Bringing The Addams Family to the modern world would be interesting, but for some reason they chose against it.