The Falcon and the Winter Soldier Brings Backstories to Superhero Sidekicks 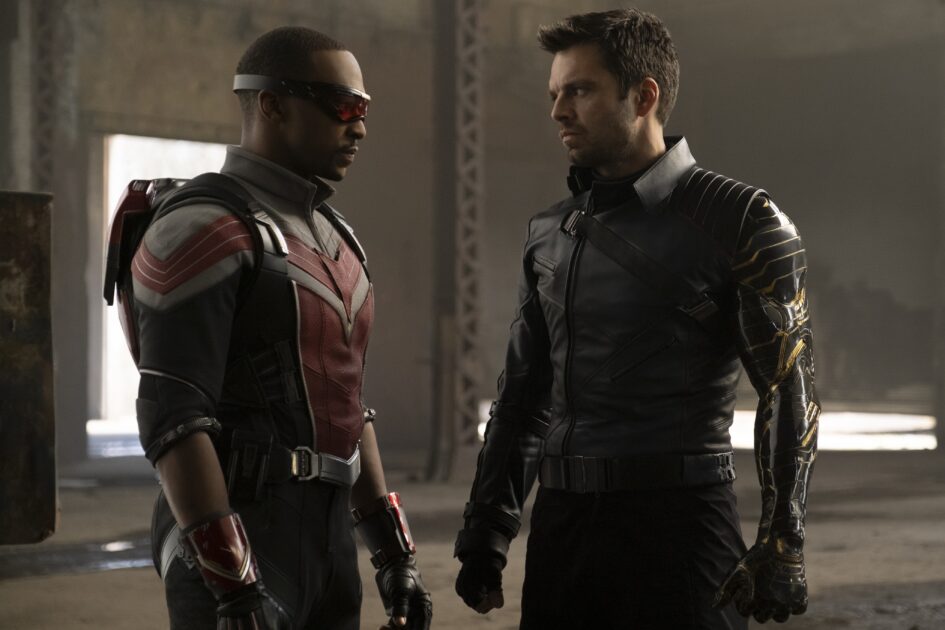 Per Matt
You may recognize these titular superheroes, but you may have never realized how much you actually related to them. So far, throughout their big-screen outings within the Marvel Cinematic Universe, Sam Wilson (aka The Falcon, played by Anthony Mackie) and Bucky Barnes (aka The Winter Soldier, played by Sebastian Stan) were relegated to sidekick roles throughout the buildup of The Avengers’ excursions (as well as the individual characters’ solo spinoffs). Thankfully, they finally receive sufficient backstories to actually warrant solo adventures, where they can finally step out of the shadows and into the spotlight.

If you somehow survived (and understood) the misadventures of WandaVision, you’d better prepare yourself for a storyline that’s just a little more grounded in reality. The Falcon and the Winter Soldier attempts to open up new worlds for our heroes, bringing viewers a little bit closer to their personalities. Along the way, these feuding characters might actually become friends, as each one seems to be fighting for the same goal, albeit through separate ways.

There’s no need to deny the truth: No more Captain America is a huge loss. Following the events of Avengers: Endgame, Steve Rogers has saved the world for the last time. It’s a big deal for the good guys of the MCU, as well as every fanboy and fangirl around the world, as his character was the best of the bunch. As he is no longer able to carry the vibranium shield in his golden years, he’s finally hung up the mantle for good. With his absence, both Sam and Bucky have lost their best friend, and neither one feels like they could actually step into the boots of the country’s No. 1 super soldier.

Although Steve may have passed the shield to Falcon, Sam would rather hang it up in a museum honoring his friend. But the U.S. government may have other plans, as Captain America’s legacy gets honored, while looking toward the future. Is it remotely possible that someone else would dare take over the role?

“We need new heroes… ones suited for the times we’re in.”

It’s 2021: The world’s a crazy place. No one’s stable, not our allies nor our enemies. These are fragile, damaged heroes. Both are kind of lonely, dealing with a massive sense of loss. Sam’s got financial problems, still trying to comprehend nonexistence during the “blip.” At 106 years old with no history and no family, Bucky is no longer The Winter Soldier, but his nightmares are never ending. He’s got his mind back and he’s been pardoned by the president, but he’s still missing something… what could that be?

It’s been a while since I’ve seen a Marvel movie (I can’t believe the last one was actually released two years ago). Within the first five minutes of the very first episode, a big-screen adventure is brought to my computer and I can’t be more thankful. We finally catch Falcon in some of the character’s best-ever action scenes, with all-new “Stark-level tech” (Hello, Redwing!). Why hasn’t any previous film (or filmmaker, for that matter) ever given the character his due before now?

There’s lots of setup within the first episode, prepping layers upon layers of character development, surely to be extended throughout its announced six-episode first season. Something that continues to shock me: Every time Sebastian Stan is gifted a few lines of dialogue, it takes me a few seconds to remember who’s speaking, since his character has said so little throughout every scene he’s appeared in, I keep forgetting what his superhero voice sounds like! That’s not a good thing. So, I’m thrilled when Bucky gets some action scenes, but better yet are his down-time moments (and his dialogue!).

Don Cheadle makes a guest appearance and much like WandaVision, more crossover characters are destined for this television entry. Initially set up to be the first MCU outing for Disney+, the series was delayed due to the global pandemic. It’s probably better this one airs after the build up of WandaVision, so fans can get a basic idea of what to expect for future series (and not be let down when their conspiracy theories don’t come to fruition). There’s no mid- or post-credits scene, but that shouldn’t deter you from the main storyline.

It’s somewhat surprising that there’s no actual interaction between the two main characters in the first episode, although I don’t see that continuing for much longer. Self-described as a global adventure that teams up these characters while testing their abilities, I don’t foresee this as a buddy comedy, but most likely an Odd Couple of superheroes, constantly butting heads but working toward the same goal.

I’m really looking forward to seeing how these background characters can expand the Marvel Cinematic Universe, while the big guns are away.