The Walking Dead Should ONLY Tell Anthology Stories

Robert Patrick's visit to The Walking Dead Universe was short-lived.

Per Matt
I don’t think AMC network executives will ever be accused of leaving money on the table. Just as the basic cable channel spun-off Better Call Saul from Breaking Bad, The Walking Dead Universe has been heavily mined (and broadcast). With three series currently airing and a series of related films already receiving the greenlight (as well as two more shows waiting in the queue), there’s a very good chance that the first thing to pop into a fan’s head whenever mentioning TWD is the TV network, instead of the comic.

As each spin-off airs, AMC becomes synonymous with the pop-culture brand. And with each new show, different types of filmmaking techniques are employed to bring a new perspective into this shared world. While many characters, storylines and plot devices are brought to the small screen from Robert Kirkman’s original source material, at some point the shows have left behind large numbers of audience members. I’m here to speak my peace about how the series, plural, can welcome past fans back to the franchise: The Walking Dead should ONLY tell anthology stories!

For years now, I’ve been screaming that there were simply too many characters crammed onto the mothership for fans to really care about. While they never really amounted to red shirt-level human shields for our heroes, they never really received much screen time to amount to much, as the ongoing mythology was expanded. Much of this happened about the time Negan made his grand entrance. There was enough cannon fodder to spread around for quite some time. But even after Sanctuary fell, the supporting cast continued to grow and fewer of the characters were killed off. At one point, there were so many new people popping up here and there for one or two episodes, only to disappear for long stretches of time, I’d totally forgotten they were still somehow involved with the ongoing storyline. From the onset, Robert Kirkman and crew should have embraced story structure of a past hit sci-fi show: The X-Files!

From its inception, TXF episodes were either mythology based or they told a Monster of the Week standalone story. While taking place within the same shared universe, they often didn’t employ too many crossover characters (or plots). They were either simple-to-consume freak shows or they involved complicated ongoing details that held the show together. There were plenty of fans who enjoyed one style more than the other, but I was somewhere in between, enjoying both almost equally. Instead of bringing in large groups of characters into The Walking Dead on multiple occasions, I wonder what the show would have looked like had it only told smaller standalone stories involving one or two characters at a time, without the larger, more controversial plots being told?

Why Have Ratings Declined for The Walking Dead? The AMC Chief Knows…

Smaller themes aren’t always bad. They can sometimes feel like a waste of time, but they can also really bring out some great character development. In fact, once I learned there would be five additional “Coronavirus episodes” airing after the originally intended finale, it felt like the network was looking for any sort of reason to keep basic cable’s top-rated series cranking out the revenue, even though the main storyline had mostly been resolved and didn’t demand them.

These Season 10 anthology episodes included not one, but two Carol and Daryl episodes, which felt like 1.5 too many (the “Diverged” bad day felt useless in the overall grand scheme of things). Princess received an entire episode… really? A buddy scavenging session by Aaron and Father Gabriel Stokes uncovers dual short-lived roles by Robert Patrick and the extended Season 10 finale finally gave Negan a proper backstory. Now, two of those five episodes were absolutely incredible. It shocked me how much I enjoyed “One More” and how disappointed I was to finally get a strong actor like Robert Patrick, in all his Terminator 2: Judgement Day and The X-Files glory, finally onto the show, only to lose both of his characters by the episode’s end. Sometimes, that’s how the anthology story ends. 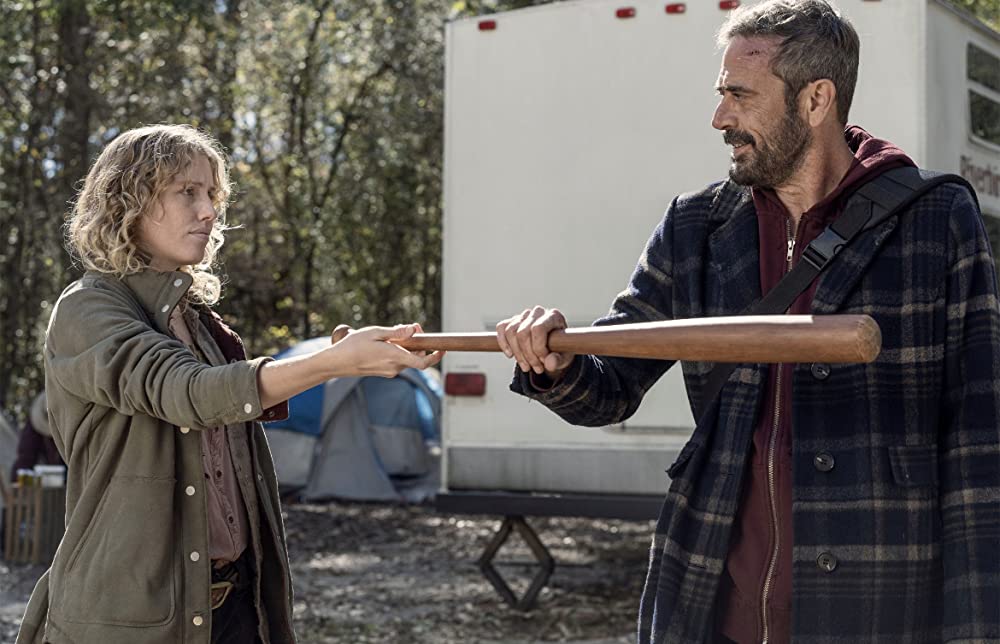 Did you catch this quick Easter Egg in “Here’s Negan?”

But the best of the bunch was peeling back the layers of the show’s best Big Bad in “Here’s Negan.” Carol takes it upon herself to move the once bad guy out of Alexandria now that Maggie has returned. In the process, flashbacks upon flashbacks take place (That’s four times the ego and the monologues!), showing the flawed character was once a decent — though not perfect — husband. One of the hardest things for a writer to do is to make the antagonist sympathetic, and here the show writers outdid themselves.

“Some things can’t be forgotten.”

It’s amazing the sort of character development both Negan and his wife, Lucille, have in this episode. There isn’t much scene-chewing going on, but the character does receive some kind of redemption and a sort of understanding as to how he transitioned into the major antagonist. He burns down the past while some closure concerning his passed wife, and it looks like he won’t be returning to his beloved bat once more. So, what version of Negan will arrive in Season 11?

For the past two seasons, really, the character has been wasted. We, the audience, were robbed of more episodes like this one and “One More.” There could have been numerous cameos by big-time actors like Robert Patrick inserted into the franchise, if the series only brought more anthology episodes to life. While the franchise would definitely look a lot different than it does today, the once-huge audience might have stuck around to see much more of it.

Fear The Walking Dead does a better job at telling anthology stories (Killing off Fear‘s Best Character Does Mean Something), so hopefully TWD can learn a thing or two from its sister series. Season 11 is currently being filmed for TWD as I type this and there’s no telling how the extended final season’s story structure will develop, but I really hope there’s some strong standalone episodes being written around The Reapers’ story arc. If not, I’ll expect the now-in-development spin-off series to pick up the slack where these two outstanding anthology episodes left off.