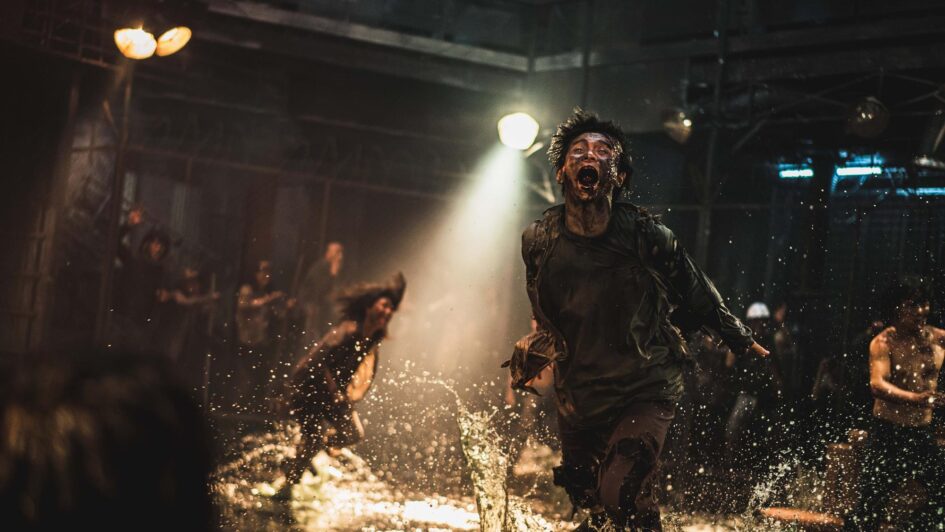 Zombie movies and shows are finally on a downward spiral. The Walking Dead phenomenon seems to have finally run its course. With the comics series finished and only a single season left to air on television, I have to say it’s finally over. Many other films and shows have come. Most were simple cash grabs, flaring up for a short moment then dying down just as quickly. But there were a few exceptions to the rule. Train to Busan would have to be classified as one of those rarities.

In my previous review on this site, I called Train to Busan a “hidden horror gem.” The film, set on a high-speed train during a Zombie Apocalypse, told many stories but was very cohesive. The setting made it all the scarier, as, on a train, there really was nowhere for the passengers to flee. Once the outbreak began, it felt like only a matter of time before the entire train was overrun. Truly, the writer and directors knew how to play off the raw emotions of the viewers perfectly.

Then, they decided to go back in time and give us the prequel, Seoul Station. The feel of the film was different. Maybe it was because the movie’s animated. Maybe it was rushed. But, really, all it felt like was a complete and total cash grab. The story was a muddled mess. Rather than giving us a background on what spurred the Apocalypse, we just see the start of it from a different angle. The characters we loved from Train to Busan are nowhere to be seen. Sadly, the people we are introduced to are not fleshed out, making it hard to emphasize their plight. It was an abysmal failure to be even considered part of the same Train to Busan world.

The horror streaming service, Shudder, has made the sequel, Train to Busan Presents: Peninsula, available to viewers. Peninsula initially proved to be a good successor, grossing more than $20 million in its limited Korean premiere. But due to the pandemic, the growth of the film outside southeast Asia was brief. It did not get a chance to shine before audiences at Cannes, and the studio’s deal with AMC was delayed, as well. But with Shudder, the world now has a chance to see what has happened in the four years since that train ride from hell.

Peninsula starts at the same time as the other films. Captain Jung-Seok (Gang Dong-won) escorts his sister, nephew and brother-in-law, Chul-min (Kim Do-yoon), to a boat, so they can escape the attack. Along the way, he makes a decision to refuse the pleas of another family, leaving them to certain death. Their relief in making it to the boat is short-lived, as an infected man begins ravaging the passenger. Jung-Seok, unable to save his sister and nephew, seals off the cabin, leaving himself and Chul-min as the only members of their family alive.

Four years later, Jung-Seok and Chul-min take a mob job in Hong Kong to recover a van full of money. During the recovery mission, the Zombies in the area attack them, along with members of a rogue military group. Jung-Seok is rescued by sisters Joon (Lee Re) and Yu-Jin (Lee Ye-won), but Chul-min is taken by the militia.

The militia, known as Unit 631, is led by Captain Seo (Koo Kyo-hwan), Sergeant Hwang (Kim Min-jae), and Private Kim (Kim Kyu-baek). Having found the money in the back of the truck, Captain Seo creates a plan to ensure that he is able to escape the undead-filled peninsula. Having lost his mind being stuck in the land of the dead, Seo will stop at nothing to ensure he is rescued from his hell.

With only a limited amount of time to get the truck and the money back, as well as to rescue his family member, Jung-Seok recruits the help of Joon, Yu-Jin, their mother Min-jung (Lee Jung-hyun) and grandfather, Elder Kim (Kwon Hae-hyo). Together, the group infiltrates the Unit 631 compound, but will it be too late for everyone to escape the doomed peninsula?

I must say that I went into Peninsula with lowered expectations than I did with Train to Busan and Seoul Station. The previous two films had received quite the buzz on social media, as well as other sites. But after my letdown that was Seoul Station, I felt that I needed to pull back some. I refused to read any of the news or spoilers about Peninsula. This way, I could watch with no predisposition.

For all its efforts, Peninsula was a wash for me. There were a few scenes that I thought were neat and engaging, but the movie felt like it was just a rehashing of things other Zombies films and shows have already done. For instance, the gladiator arena with the Zombies reminded me of the arena that was used in Season 3 of The Walking Dead. The filmmakers didn’t modify the concept much, so it felt lackluster. With Peninsula taking place in a dilapidated city, there was not the same energy that Train to Busan gave us. I hate to say it, but without the confined space, there was not much of a sense of imminent danger. Without that, Peninsula failed to reach the level of excitement that Train to Busan reached.

I have to give Train to Busan Presents: Peninsula two out of five stars. Peninsula fell into the quagmire that has consumed the majority of Zombie flicks during the past decade. Simply put, Peninsula is uninspiring, contrived and boring.