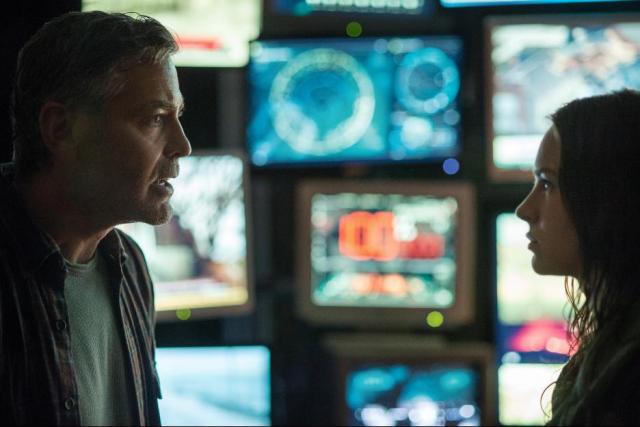 Per Matt
Tomorrowland feels like a science experiment. No safe choices were made during its construction. It’s a Petri dish full of the unknown. Nothing about this Disney film follows your typical Hollywood blockbuster stereotype.

This movie takes a bunch of risks with its formula: The protagonists include a cranky old man (George Clooney), paired with a curious-but-hopeful teenager (Britt Robertson). There’s no love story involved, but there is a secondary family dynamic. And the riskiest element of them all? The future is actually a bright place, after all.

According to legend, Gustave Eiffel, Thomas Edison, Jules Verne and Nikola Tesla formed a secret organization, along with Walt Disney, in hopes of creating a Utopian society. What if this place, dubbed Tomorrowland, was actually created many years ago and hidden from the present-day real world? If possible, could that type of society survive throughout the years?

Unfolding via several flashbacks, Clooney’s Frank Walker visits Tomorrowland as a child. As a youthful inventor, he’s the prime candidate to contribute to the ideals found there, but something goes terribly wrong and he is evicted. Years later, he’s disillusioned and jaded when he’s introduced to Robertson’s young and hopeful Casey Newton, who has a sky’s-the-limit hope for the future. They unwillingly team up in hopes of breaking into Tomorrowland and making the future a better place.

Hugh Laurie’s David Nix is the main antagonist of the film, who has will seemingly run Tomorrowland into the ground and does little to prevent an oncoming disaster. Keegan-Michael Key is a hoot in a minor role and Tim McGraw continues his big-screen appearances, each time growing with more prominent roles. The gem of the bunch is the young Raffey Cassidy, whose Athena hides many secrets from her on-screen friends (as well as the audience).

Back in the day, Walt Disney had an optimistic vision of the future. This movie is loosely based on the theme-park attraction he created, Tomorrowland, which featured a celebration of technology at Disneyland. He believed technology would help society create a better world (along with incredible entertainment) and as a result, there’s a lot of great futuristic gadgets showcased throughout the film.

The best parts of this movie include the roller-coaster ride that the good guys must take in order to get to Tomorrowland. Afterward, the storyline falls flat quite a bit. Expect lots of green screens throughout this film and surprisingly, a lot of violence, quite a few deaths and even a few curse words. Even for a PG-rated movie, that feels like too much. Many years ago, PG movies were a lot tamer. The youngest of children might not be the target audience for this Disney movie, but pre-teens and teenagers will really enjoy it. Parents beware.

Part danger and part fun, director Brad Bird focuses on a positive future for humanity, just as Disney did once upon a time. This idea conflicts with many futuristic visions of today’s filmmakers, who often depict an ominous dystopian society which is irreversible. Will the movie-going public buy into a brighter and happier place? This movie will either be highly successful with its risky vision or be a complete box-office dud. Brad Bird knows both scenarios well, having previously won two Academy Awards during his time with Pixar, as well as having a flat-lined flick (the little-known Iron Giant may be his all-time best work).

The location of Tomorrowland felt like it could be found somewhere within the multiverse, but it’s never fully explained. Where exactly is it? Maybe it’s hidden somewhere within us all, daring to be released, if only we can believe in building it.