TWD Gets Explosive, Because That’s How It’s Gotta Be… 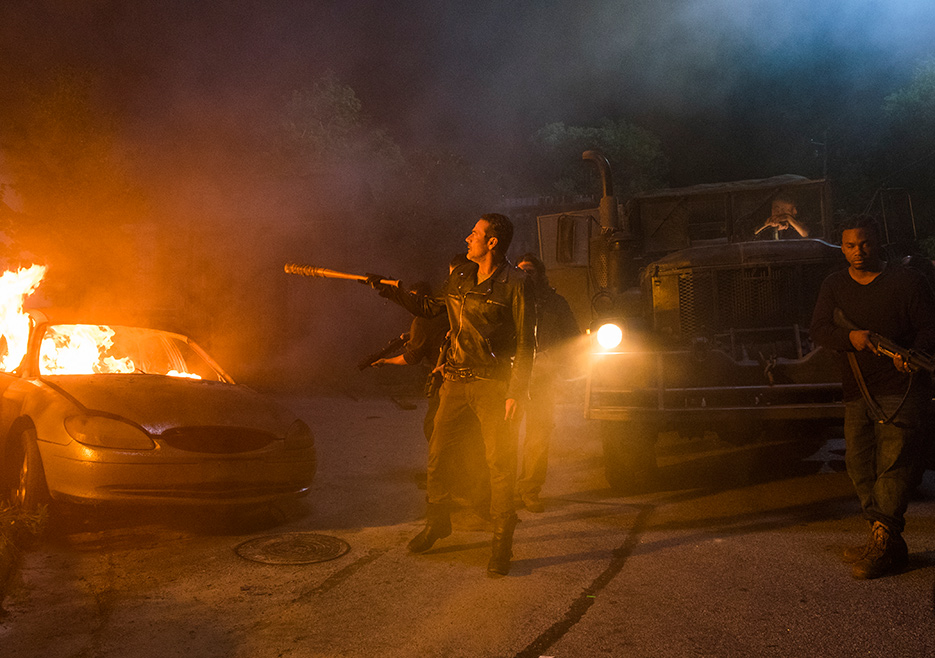 An All Out War is declared by Negan (Jeffrey Dean Morgan) in Episode 8 of The Walking Dead. Photo by Gene Page/AMC.

In case you missed it, sparks were flying on the explosive mid-season finale of The Walking Dead, “How It’s Gotta Be.”

So far, the first half of this All Out War in Season 8 has been filled with non-stop action — that is, until last week’s episode, “Time for After,” which turned out to be a Eugene episode. Until now, he’d played both sides, both good and evil, but now that he’s getting pulled from different directions, it’s clear: He’s Negan. The ghost of Sasha’s death still lingers for different characters and Rick gets The Scavengers at Oceanside to flip sides, yet again.

In the 90-minute mid-season finale, “How It’s Gotta Be,” Carl’s actually wearing his big-boy pants, Enid and Aaron turn a distillery tour into a fatal situation and the mini revolution backfired. Somehow, the Saviors survived, getting the upper hand once again. The Sanctuary is damaged, the Kingdom is lost, Alexandria gets firebombed… but the Hilltop is saved. For now. That’s where the last stand will take place against Negan!

At last, Dwight has helped out Rick’s Gang. Ezekiel has lost his throne. Father Gabriel still suffers from a mysterious sickness. A sewer stronghold seems to be where the good guys now live. And Carl’s death wish has been granted. To Be Continued…

So, Shiva’s dead. The heroes are scattered. Daryl’s vest gets returned to its rightful owner. Baby Judith survived the bombing campaign and all of this seems to be leading up to the upcoming crossover event taking place at some point in 2018 with Fear The Walking Dead.

Back to the topic of toddlers, Maggie has adopted a random baby, which is in addition to her unborn child. Clearly, having the littles on this show proves these characters are heroes and gives the viewer a sliver of hope for humanity, but how many more babies will join Rick’s Gang before they’re all killed off? There really is no room for infants during the Zombie Apocalypse. In fact, the filmmakers lost a golden opportunity by writing Lil Ass Kicker out of the TV show from the grenade explosions in Alexandria. Opportunities missed.

In terms of Carl, the character wasn’t totally wasted, but it was one underwritten. He was painfully suffering from puberty through the Zombie Apocalypse, which seems to be the worst possible scenario. On Talking Dead, Khary Payton mentioned that as a character, Carl developed mentally as an adult, while Negan never advanced past a childhood stage. At a certain level, this feels like sage advice from a king. While the character’s outcome varies greatly from its comic book source material, Carl isn’t history, just yet. Showrunner Scott M. Gimple declared he will return to make a grand exit from the franchise in the mid season premiere, airing in January.

“I believe in Rick Grimes.”

Final Thoughts: What can we expect for the show’s return in 2018? Negan’s still alive and currently has the upper hand (once more), but most likely, he’ll be killed at the end of the season (or the beginning of Season 9). Dwight is gonna reconnect with the Saviors and scheme some more for the good guys. Eugene and Rosita will continue to be haunted by their past decisions and eventually they shall right their wrongs. Chandler Riggs will definitely go out with a bang and somehow that’ll affect Negan negatively. For Ranger Rick, he’s gotta suffer some more. First his best friend dies. Then his wife. And now, his son has a death sentence. How much more agony can this character take? Watching from the audience, we can only hope he just survives somehow.