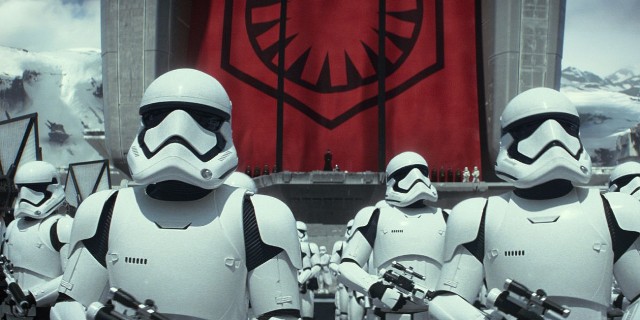 Per Matt
A lot can change throughout the years, but the anticipation for a new Star Wars movie never seems to disappear. The production company may have been sold, the creator may have retired and a new generation of filmmakers will be entrusted to continue the epic mythology from a galaxy far, far away, but the same philosophies remain. It’s a battle of good versus evil, with the fate of the Star Wars Universe lying in the balance, but one thing may never change: Many people will continue lining up to experience the franchise’s films for years to come.

When I was young, I watched Star Wars: Episode V – The Empire Strikes Back at a local movie theater, unknowingly starting a tradition of watching and enjoying the movies with large crowds. I have now seen six of the seven films on the big screen (along with the three Special Edition releases), including last week’s release, Star Wars: The Force Awakens. Looking back, the experiences may have slightly changed with each release, but all of them resonate as a fun tradition that’ll likely continue far into the future.

The 16-year time frame between Return of the Jedi and The Phantom Menace was considered The Dark Ages by many Star Wars fans, with a new hope fading for another entry as each successive year passed by. The buildup for Episode I was a horrific wait. It was a much simpler time back then, when science-fiction and fantasy spoilers didn’t really exist, podcasts and 24-hour news outlets didn’t create endless hype and the World Wide Web was still in its infancy. But once the first prequel was released, many people (myself included) lined up, camping out to purchase tickets on opening day. Back then, Fandango and other pre-sale ticket outlets didn’t exist, leaving faboys and fangirls to brave the elements (while bonding) in order to buy tickets at the first available time.

The initial excitement of that prequel quickly led to utter disappointment. This time it’s different, since George Lucas and his never-ending awe of everything CGI is no longer steering the Star Wars ship. Thirty-two years after Return of the Jedi was released (and 10 years after the release of Revenge of the Sith), original-trilogy fans can finally cheer for the sequel they always wanted. Multiple pre-sale ticket-selling websites reportedly crashed, gearing up for the opening night. Going back to its roots, there’s so much nostalgia and goodwill scattered about the storyline of The Force Awakens, many fans can forgive its recycled plot points, practically mimicking the previous films. While there’s not too many new details that are revealed in this film, you can expect they’ll arise in future sequels.

Returning to the Star Wars Universe are the legacy characters of Han Solo, Chewbacca, Princess Leia, Luke Skywalker, R2-D2 and C-3P0, while secondary characters Admiral Ackbar and Nien Nunb make an appearance, along with the voices of Yoda and Obi-Wan Kenobi. Composer John Williams also returns to score another great soundtrack for the franchise.

Back in the day, George Lucas had no interest in setting box-office records, releasing many of his past movies on a Wednesday in May. Without Lucas, The Force Awakens was released in December and has already broken many records, grossing $238 million in North America last weekend, surpassing Jurassic World’s previous opening-weekend record of $208 million.

The pre-release hype was endless and many people were worried they wouldn’t get to see The Force Awakens on opening weekend, crashing multiple pre-ticket-sales webpages, but I refused to buy mine months in advance. It’s impossible for every movie theater in the country to sell out every screening of the movie for every hour during that first weekend, right? I gambled and waited until Saturday, only a few hours before my preferred matinee showtime and reserved my ticket with ease. Arriving 30 minutes early, I still had to wait in an extra-long line just to enter the theater, but there was no problem getting in or grabbing a seat. This was the newest version of waiting in line. Although the setting may have changed a little bit throughout the years, waiting in line for a Star Wars movie still felt familiar. I felt right at home.