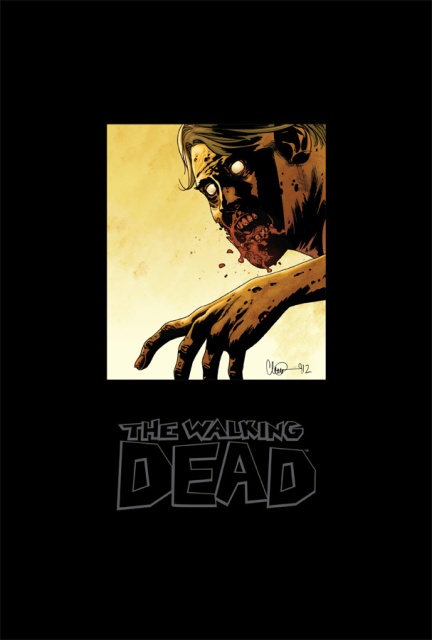 It’s a new year and that means it’s time to focus on Zombies, once again!

In The Walking Dead Omnibus #4, Rick’s Gang is still settling into Alexandria. They’re not used to living inside a gated community that’s stocked full of food and weapons and runs on solar power. Everything seems a little too perfect, so Glenn and Rick steal weapons from the armory… you know, for just-in-case scenarios that always seem to happen.

A surprisingly considerable amount of the book focuses on the nuances of everyday life. Rick’s Gang quickly learns the rules of this community and tries to fit in. That doesn’t last too long. Before you know it, Rick takes over the leadership role just before a walker herd surrounds their small community and creates chaos. Morgan gets bit and loses an arm. Instead of helping a lady, Rick chops off her hand when she panics while holding onto Carl. Random gunshots are fired and Carl loses an eye and an ear. Bouncing from a whole lot of inaction (with plenty of talking), leading to nonstop action, the story seems to progress in waves.

The last half of the the omnibus features Positive Rick. Instead of focusing on the gloom and doom of the Zombie Apocalypse and talking to Ghost Lori on the telephone (which he still does), he’s turned over a new leaf (yet again). Working well with others, he starts to make long-term plans for the community: reinforcing the fence, creating obstacles for undead and strangers outside fence and coordinating other members of his group to train the rest of the community members for survival. Abraham is in charge of the construction crew and Andrea is in charge of gun training.

A mutiny within the community is quickly averted before Rick’s Gang is introduced to Paul Monroe, aka Jesus. Supposedly, this man is a part of the Hilltop community, which is a mere 20 miles away from Alexandria. Monroe has created a network of separate communities to communicate and trade goods with and would like to barter with his new acquaintances. After dealing with The Governor, Rick isn’t swayed so easily. But after a small contingent returns with Monroe and sees Hilltop for themselves, they quickly gain interest.

However, all is not right within Hilltop. Apparently they’ve been terrorized by the series’ new antagonist, Negan, who is the leader of The Saviors. Power hungry, Negan demands half of Hilltop’s food and supplies in return for protection from the walkers and other humans. Not able to protect themselves, the Hilltop residents oblige Negan until they can no longer tolerate the bully. The Hilltop leader makes Rick an offer he cannot refuse: Deal with Negan in exchange for food and supplies to survive the winter. Rick obliges because he looks at Hilltop as the future, hoping to train its 200 residents into becoming an army that will in turn protect his best interests.

Rick’s ready to stop surviving and start living. To be continued…

Moving the series’ setting away from iconic locations like Hershel’s Farm and The Prison takes some getting used to. When compared, Alexandria, as a whole, feels pretty generic and bland. I guess that’s why the story feels like it’s going nowhere for half of this huge collection.

In addition to settling into a new location, many of the characters reflect on past characters who have fallen. It gets a little depressing after a while. The only thing that can lighten the mood is killing walkers, naturally. I expect many of these same events to have some influence on Season 5 of AMC’s The Walking Dead, when it returns for its mid season premiere.

Strength: Big events are set up…
Weakness: …But not a whole lot happens.
WTF Moment: Jessie is a recurring character whose name is spelled two different ways only pages apart. Where’s the Copy Editors?

Notable Quotes:
– “I feel like I died a long time ago.”
– “Nothing bad ever happens to me.”
– “This is a story people are going to tell.”
– “The dead… they’re a manageable threat.”
– “You know about the darkness I have inside me.”
– “I can only slow them down — you’ll need to brain them.”
– “I have a big giant hole in my head where an eye used to be.”
– “This place is a shining beacon of hope in the middle of a wasteland.”
– “We’re outside the wall, asshole. Ain’t nothing out here not dangerous.”
– “Confrontation has never been something we’ve had a lot of trouble with.”
– “Am I the only one who’s noticed we’ve been overrun — taken over by crazy people?”