Welcome to the Blumhouse: Piecing It All Together 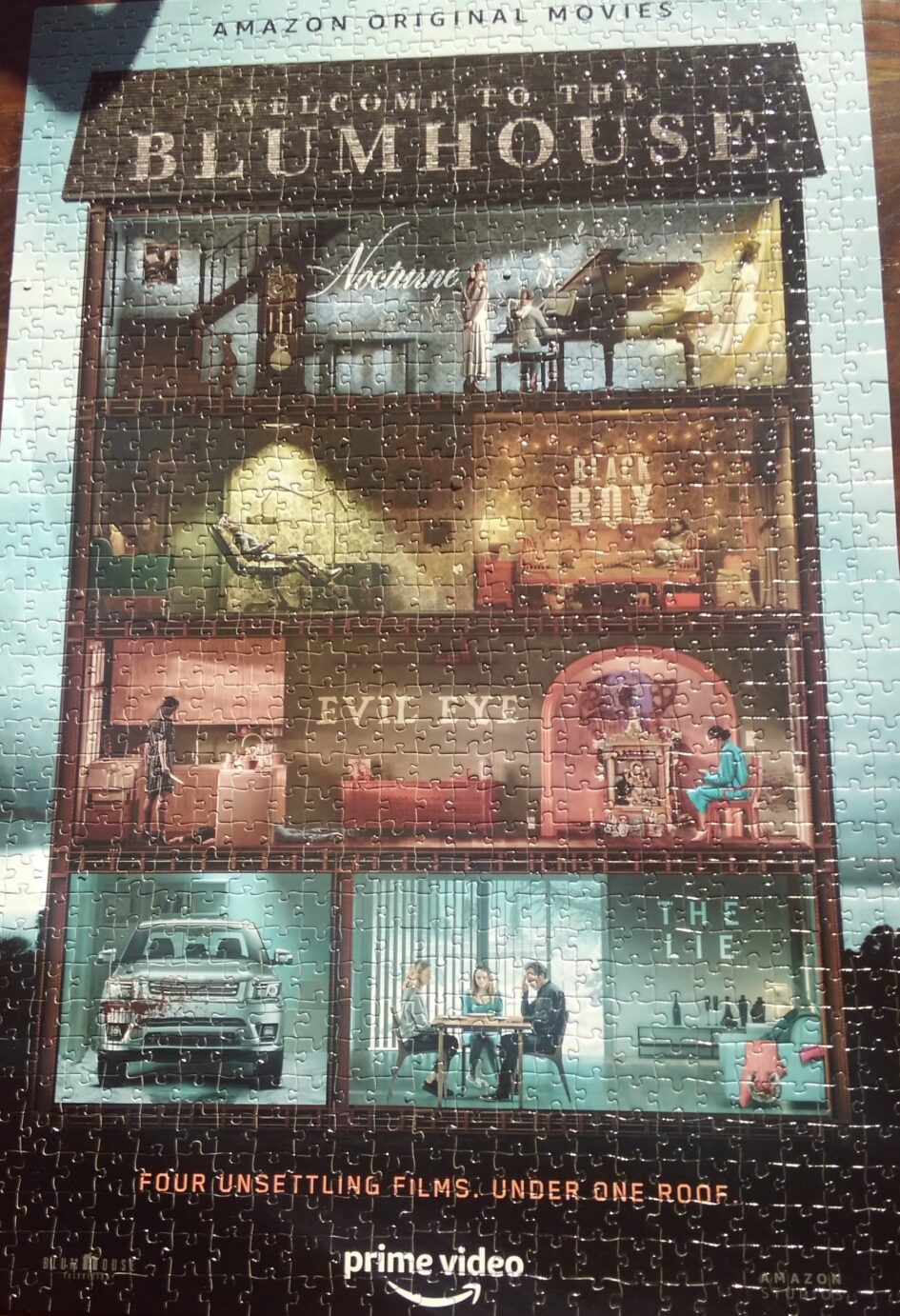 Per Matt
At times, movies can be like puzzles. The viewer must constantly decipher what’s going on with the characters, who they are and their importance to the ongoing storyline. So, when Blumhouse Productions released four unrelated horror films just before Halloween, one publicity item the studio chose to use was an actual puzzle. Welcome to the Blumhouse, indeed.

As an anthology series, each film offers something unique, filmed with a low to moderately priced budget. Tales of terror coming from the house of horrors, each one offers something slightly different. While not being 100 percent horror movies, one’s dramatic, but not quite a thriller. Another deals with traditional vs. modern storytelling elements duking it out. Sacrifices and sacrificial offerings are dealt with in the third, while the final one paints a story of impending doom, it’s really only dealing with a deranged teenager. Same difference, right?

Looking back, these movies may involve stories that are better suited for the small screen (and since they’re distributed by Amazon Prime Video, which can be watched on cellphones everywhere, that’s a mighty small screen!), but each one shares a common trait. Like clockwork, around the hour mark, a big revelation is made, story-wise, kicking the protagonists’ pressure up a notch to find a solution to their problems. Generally speaking, that’s about half-way through a feature film, which is way too long to wait for something to finally happen. That formula could easily be tweaked for the second round of Welcome to the Blumhouse anthology films, set to be released in 2021, so I’ve got something to look forward to next Halloween.

Growing up, I was a huge fan of solving puzzles. So much so, I’d invite friends over, crank up the radio and time our completions. I’ve even framed a couple of my favorite puzzles. That kind of geekiness speaks volumes about my interests and dedication. Regardless, when I was presented this promotional item, I took the opportunity to renew one of my favorite pastimes.

Once you lay the foundation, if you trust the process, it will be successful each and every time… that is, unless there’s some irregularities. I prefer 1,000-piece puzzles because they generally offer decent-sized pieces that are easy to differentiate from all the rest. When you get those with more pieces, they tend to be smaller and much more difficult to see. 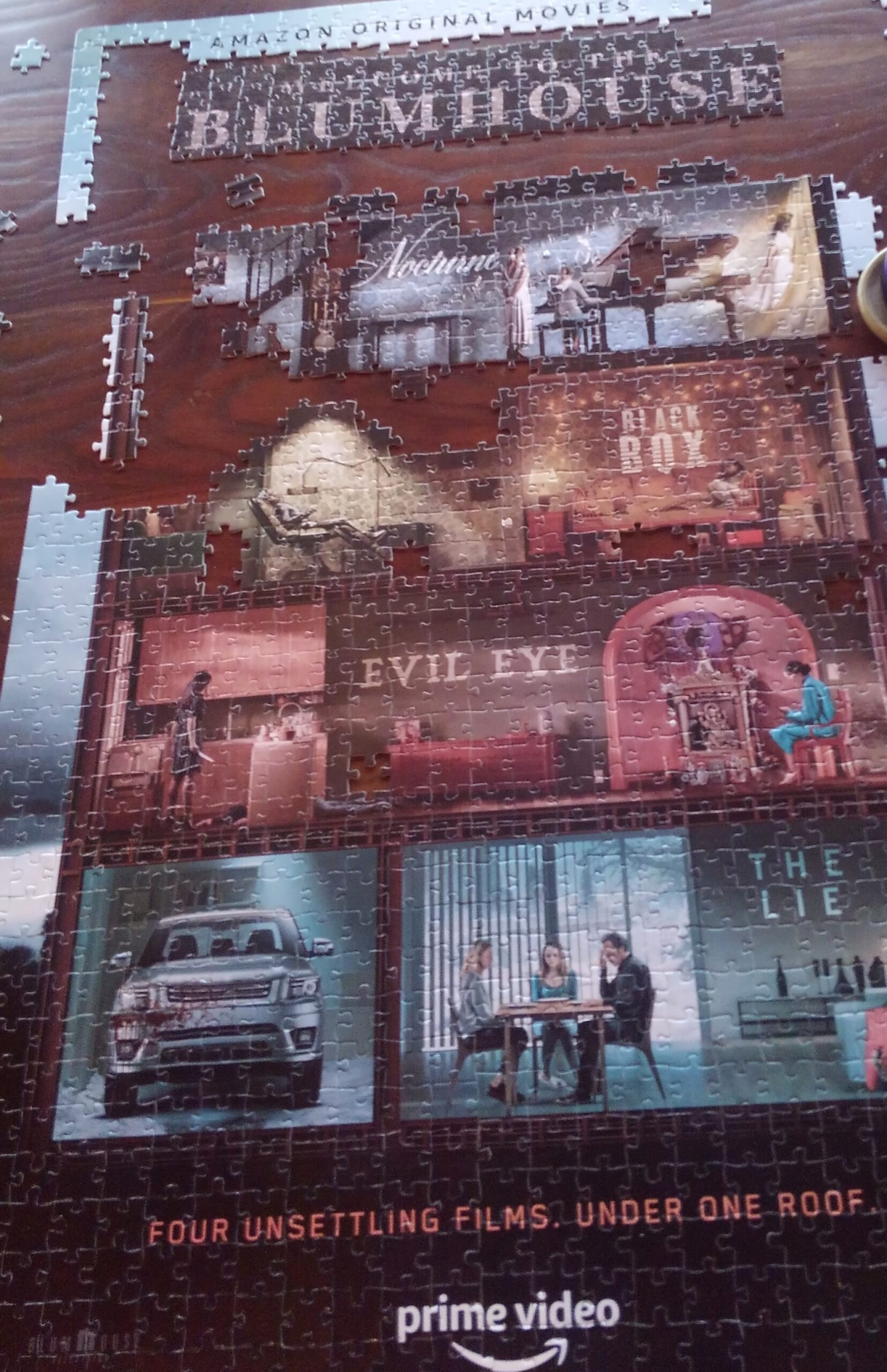 This horror-themed puzzle was a little larger than what I’m used to working with — which wasn’t a problem — but it was the cut of the pieces that created difficulties. There might have been too few shapes used in this one. By that, I mean there were a variety of individual shapes used throughout; however, I was constantly frustrated after making progress. I’d constantly run out of certain colors and certain shapes, having to restart by tearing them down, because they didn’t actually interlock. It seemed like so many of these pieces actually fit perfectly with incorrect parts. And the only way I could confirm they were pieced together correctly was by fitting in all their surrounding pieces.

That’s a long-winded way to say I didn’t break any time records with this one. Completion time: 13.55 hours. In fact, I actually didn’t complete the borders until the very end. Now that’s a true horror storyline for a puzzle enthusiast!

I’d like to personally thank the Blumhouse, Amazon and Allied media people for creating and releasing one of my all-time favorite promotional items. I may look to improve my completion time next year about this time, before the next wave of WTTB films premiere. This puzzle does a great job promoting the four individual films. I look forward to watching each one.