What Happened to The Walking Dead? 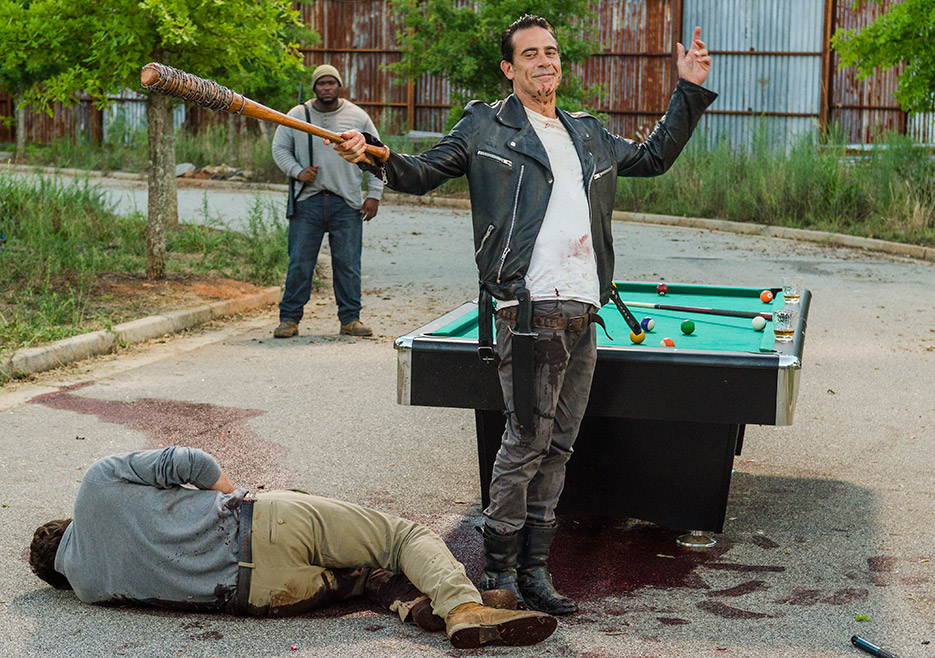 The Walking Dead has experienced a roller coaster of highs and lows in its storyline throughout 2016.

Daryl has joined the Saviors. Carl has become Negan’s apprentice. Maggie, Sasha and Enid are up on Hilltop. Eugene is making bullets. Carol and Morgan are practically royalty within The Kingdom. Michonne’s on a mission as a lone wolf. Jesus is searching for supplies. Father Gabriel Stokes has finally become a half-way decent character. Rosita has a death wish. Rick’s leadership has been muted. Abraham and Glenn are dead. And yet another baby is on the way…

At the end of Season 6, The Walking Dead was the highest-rated TV show airing on basic cable, the same as it has been for four straight years, without many obstacles preventing it from staying atop the ratings rat race for many years to come. Then a funny thing happened en route to Season 7 with the introduction of Negan… the audience bailed.

With the deaths of two main characters taking place in the season premiere that was mostly used for shock value — even though they took place offscreen and basically followed the storyline of the comics — this season already feels more brutal than in years past. In fact, comparatively, past seasons now feel tame, practically neutered. Is this a sign of the times that could indicate a beginning of the end? Or is it more like desperation on the part of the producers, trying to keep the pop-culture phenomenon fresh after seven years?

According to Rotten Tomatoes, the current season has a 70 percent rating. 17.03 million viewers watched the season premiere, The Day Will Come When You Won’t Be, and viewership has declined every week until the seventh episode. Only eight episodes have aired so far this season, but the sixth episode, Swear, dropped to 10.40 million viewers, which is the lowest number of viewers since Season 3. At one point, the audience dropped around 50 percent, but it’s still the most popular series on basic cable.

No one expected the series to continue its unlikely trajectory of continuously topping the previous year’s ratings every year until the series ended, but with the sharp drop in ratings, the TV show now feels more authentic to the graphic novel, which it is based. It also makes the show feel like the death of any character is a possibility and if a Zombie Apocalypse could actually happen, the direction of Season 7 feels more in line with what could be expected for all survivors.

Some have suggested there’s simply too much dread on the TV show for one person to handle. As the drama builds up all season long, the good guys need a victory once in a while to keep the audience engaged with the characters. Much like Game of Thrones, many characters die in this series. Has the audience already decided enough is enough?

Is Negan to blame? Delivering psychological terror and horror to anyone who opposes him, Negan is an iconic character. He plays mind games with Rick’s Gang. But is he too violent? Jeffrey Dean Morgan chews up every scene he’s in, portraying an evil that has never before appeared in the show. He’s by far the best actor appearing on the series and a deserves an Emmy nomination next year. An award snub could be catastrophic for the series in the long run, which has yet to win any acting awards so far.

Backlash has been steady for fans and non fans alike this year. According to Executive Producer Gale Anne Hurd, TWD filmmakers heard the outrage, fearing dropping ratings and toned down the joyful violence featured this year. “We were able to look at the feedback on the level of violence,” Hurd said. “We did tone it down for episodes we were still filming for later on in the season.”

One of those episodes was the winter finale. According to ComicBook.com, the death of Fat Joey was initially incredibly gory and not included in the final cut. Instead, Daryl receives a close-up while bashing The Savior in the head with a metal pipe.

As the main characters are separated in order to stretch out the season, they usually get somewhat uninteresting side stories until they reunite. With his new attitude, does the world still need Rick Grimes? Is it possible to even imagine the series without Ranger Rick? Is that really crazy talk? This would definitely change up the show. Making it less predictable. Rick dies in the comics, so it’s not out of the question to imagine the series following those footsteps, at some point.

Looking ahead, there’s a good chance Heath and Sasha don’t survive this season, since Corey Hawkins is moving on to portray the lead character in 24: Legacy and Sonequa Martin-Green will be headlining the upcoming TV show, Star Trek: Discovery. Their absences will be felt on the show next year, but this also brings up the unfortunate theme that continues almost every year: Why can’t Robert Kirkman and company write meaty roles for African Americans on the show? Almost every time a great character arrives in the series (other than Michonne), it’s usually short lived. At some point, the writers have to break this cycle.

There’s still time to turn around the TV show’s fate in 2017. Ratings picked up for the 90-minute mid-season finale, Hearts Still Beating, but compared to last year, the TV show lost more than 3 million viewers. And with 10.58 million viewers, Hearts was the “lowest any TWD winter finale has done since 2012,” according to Deadline.com.

What We Learned: Spencer has no guts and that Olivia will no longer be in charge of the food and weapons rations. Daryl has escaped The Sanctuary. And Rick has rediscovered his mojo. It actually ended on a relatively upbeat, positive note. But someone followed Rick and Aaron back to Alexandria. Could this be The Wolves, finally making their official return? Or is it someone else? With so much death and destruction happening all season long, this brief moment of happiness won’t last very long. Especially for Fat Joey.