Who’s Hotter Than a Burning Building? 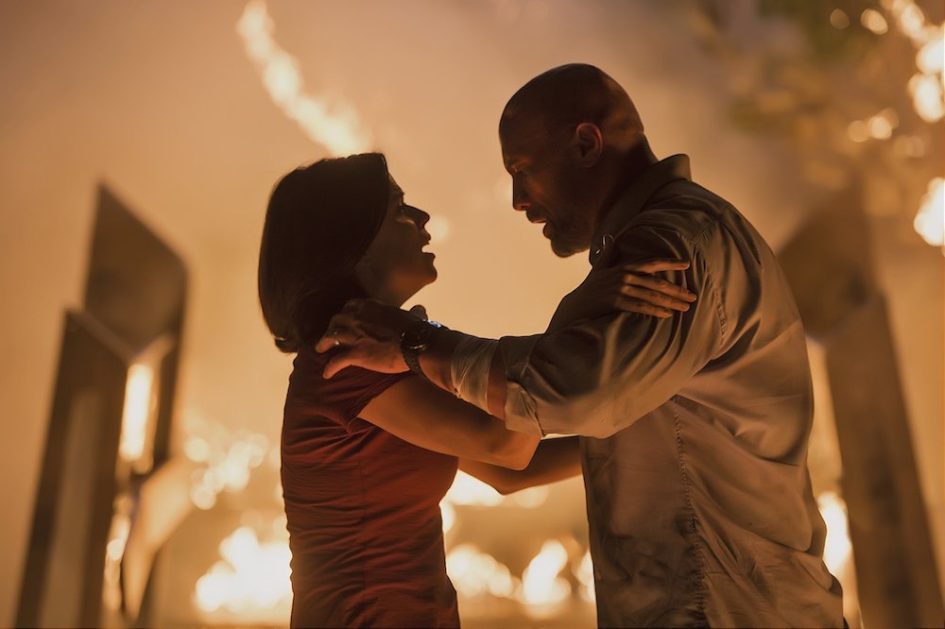 No one is hotter than The Rock. Skyscraper starts out in tragedy and the ability to bounce back. Then we jump ahead to our hero half a world away, getting ready for a once-in-a-lifetime opportunity with his family in tow. At this point, we are treated to a visual feast of technology. Then it takes a turn. One of my complaints is how easy it was to figure out who is the villain. I hate when it is that easy.

As the tension and action builds, I start to see more cliches, like the beautiful martial-arts lady in almost every action or spy movie.

Obviously, this artistically built high-rise has to go. The hero’s family is now at risk, so we get a Rock stare that is all forehead and eyes on the screen. You know the one. If you were really in front of him, the stare might make you explode. And hold it right there. Did you think I was going to tell you the ending?

Now for the technical part of our movie: The building, itself, should be considered as an actor. This actor goes from a magical, beautiful, tallest kid on the block to a bloodthirsty bogey man who might save you or kill you. Dwayne Johnson is always good at the action part of the movie and the building gives him a run for his money.

I found this movie entertaining. Dwayne Johnson showed some heart and looked tired and worn out. So, it was appropriate for the circumstances. Makes me wonder if he is contemplating his age and wondering about how Arnold is doing in his old age.

Neve Campbell’s role was limited, but she can still play the tough mom who can hold her own. I was happy to see her, since wives don’t usually get great parts in these action movies.

The Towering Inferno was the first burning building movie I can remember. Granted, it was released in the ’70s. The special effects were nowhere near what they are now, but it was pretty much a similar story. Both movies had new special effects that made you feel the urgency to get away from the monster that the fire represents. So, for me, a giant building that is on fire and might collapse is nothing new. In fact, the whole world knows what a monster a super-tall building can be. No one will ever forget 9/11; the biggest, baddest building that wasn’t a movie, but instead a real tragedy with real monsters.

I think Dwayne wanted to pay respect to the men and women who put themselves in the line of fire and are changed by it. So, he gave his character a physical disability and made him into a hero, despite his “limitation.” You should go see this movie  on the big screen. Not even your big-screen TV can give you the feeling of a burning building. I give this movie three out of five Zombie heads for the action and the special effects. Who knows, maybe the building will win an Oscar.