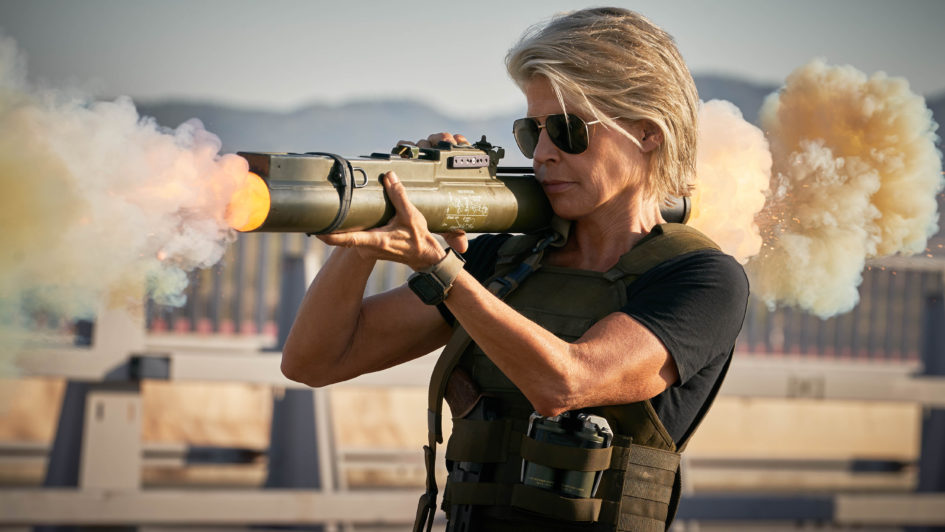 Per Matt
Maybe the better question is: Can the Terminator franchise get any better? Maybe Dark Fate really is an appropriate title for the upcoming movie.

It’s definitely safe to say the Terminator movies have been suffering from Franchise Syndrome for decades, now. Ever since James Cameron jumped ship and eventually became the king of the world, the quality of storylines have been dwindling, basically repeating the same one from that original 1984 movie: Humanity must stop Skynet at all costs or face an extinction-level event. Rinse and repeat for three films (and a spin-off TV show). Each outing, Arnold Schwarzenegger has been game, but that’s to be expected when you’re receiving something like $10 to $20 million per sequel.

I actually enjoyed Rise of the Machines, but the only thing groundbreaking about that one was the first on-screen appearance of a female Terminator (although Arnie on a fire truck was pretty great). Salvation offered big-name acting talent, but the filmmakers behind the camera didn’t get the job done, which led to the reimagined Genisys. While this was the only one that really tried to go in a different direction, storywise, even that wasn’t enough to reboot the box-office fortunes of the franchise, as James Cameron has finally reclaimed the rights to his movies and will finally continue the storyline, ignoring past films which didn’t include his affiliation.

Will this selective sequel bring back the fans of the original two films? It definitely worked with Blumhouse’s Halloween, but you can only tease a carrot (future war) for so long before someone (T2 fans) loses any and all interest. By the way, how many end-of-the-world scenarios can fans of this franchise accept?

The franchise finally brings in some proven new blood with Tim Miller (Deadpool), so there’s definitely a good chance for a lot of action and some good one-liners, but this SHOULD have been the right time to reunite John Connor with his mother. This would have been the perfect opportunity to reintroduce the audience to Edward Furlong, but it seems rehab and legal problems may have permanently forced his way out of Hollywood. It would have also been awesome to see Robert Patrick, now appearing as a good guy, but health problems may have forced him out of the picture. Instead, the only noteworthy casting choice was picking Ghost Rider to play the new Terminator (Gabriel Luna previously appeared in Marvel’s Agents of S.H.I.E.L.D.). That seems to be a decent choice, at best.

Thirty-five years is a VERY long time for any franchise, but it’s already been 28 years since Cameron was involved with bringing T2 to the big screen. Living life to the fullest seems to change people, and from the looks of Dark Fate‘s teaser trailer, this may be a different version of Cameron’s personality coming to life.

After reading the reactions of many YouTube viewers, the biggest threats to humanity in the new movie may be coming from the social justice warriors who helped create this movie. Also, they prefer the practical effects from the first couple of films to the CGI in the latest version, but I digress. Hopefully, Miller and Cameron will lead this franchise into a great new direction. I’ll hold my judgement day until actually watching it.

The adventures of sentient robots is what originally sparked my interest in The Terminator, as well as the G1 version of The Transformers (but ended with subsequent sequels and prequels, not to mention ALL of the Bayverse monstrosities). In fact, comparing to The Transformers animated series to the Terminator franchise might be important when thinking about Dark Fate. The law of robotics is an important factor, but it might just take multiple missteps in adapting an original, great storyline before the filmmakers fully realize the law of diminishing returns and eventually create something the fans ACTUALLY want to see.

Whether this new movie will receive a Dark Fate is up for debate… at least until the fans (and machines) rise up to cast their votes at the box office.