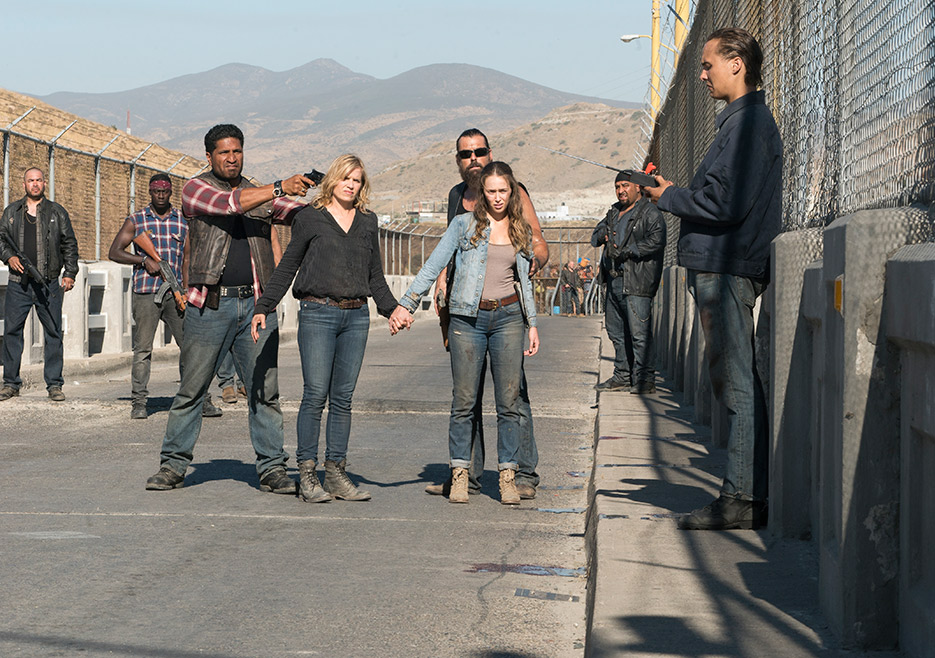 So many questions were posed in the explosive two-hour season finale of Fear the Walking Dead, that there’s no telling which direction the undead TV show may head next. But one thing is for sure: There will be a killer crossover with the mothership happening next year!

“The problem ain’t the killing… it’s the friends.”

At the end of Season 3, the slate has practically been wiped clean for a rebirth, of sorts, for the series. With the announcement that The Walking Dead Showrunner Scott M. Gimple will also take the reins of the Fear spin-off, naturally there’s going to be a crossover storyline taking place sometime soon. But before we get there, let’s take a quick look at how we got here:

When all was said and done, there were some odd flash-forward dream sequences, as if this was Lost (stop with them, already!). Where’s Lucia been all this time? Proctor John is a lunatic. Surely he won’t be quickly killed off as soon as gets his introduction. And with the destruction of the dam, everyone’s fate is still up in the air, with the exception of Madison. I guess the writer’s room will have a field day trying to figure out who lives and who dies, but Proctor John mentioned heading off to Houston after dealing with the standoff. If he survives, which he should, will he take a skeleton crew back to Texas? Will Madison and company decide to follow them? Will this west-coast storyline finally venture out of its safe zone?

As the storylines improved this season, there were just too many badly written characters involved. It was clear the show needed a new direction, but it’s somewhat surprising the show will receive a new showrunner (This is only the second one for Fear in four seasons, as compared to three within three seasons for TWD). Although Dave Erickson is definitely out, Gimple is helping out with the show’s bigger picture, while Ian Goldberg and Andrew Chambliss will run the day-to-day management. With all of that turnover, is a crossover event the only thing that could possibly save this spin-off? Ratings for Fear dipped to an all-time low of 1.99 million viewers this season for Episode 11, but rose to 2.23 million viewers for the final episode. That’s still a dramatic drop from last year’s 3.05 million viewers and 6.86 million viewers from Season 1. The numbers don’t lie, but one crossover character may not be enough to keep the series alive.

Most likely, we will see the origins of Sgt. Abraham Ford (Michael Cudlitz), but it wouldn’t be out of the realm of possibilities to assume it could possibly be Rosita Espinosa (Christian Serratos) or even Dr. Eugene Porter (Josh McDermitt).

Currently, The Walking Dead‘s Season 8 started well, with 11.44 million viewers watching the season premiere, but Episode 2 dropped to a six-year low of 8.92 million viewers. Can that one crossover character somehow bring more interest for both series? Very likely, it’ll only take place for an episode or two and won’t be an overlapping storyline for the entire season. If that scenario is correct, it may only be a blip in the fading ratings that seem to be happening for both series.