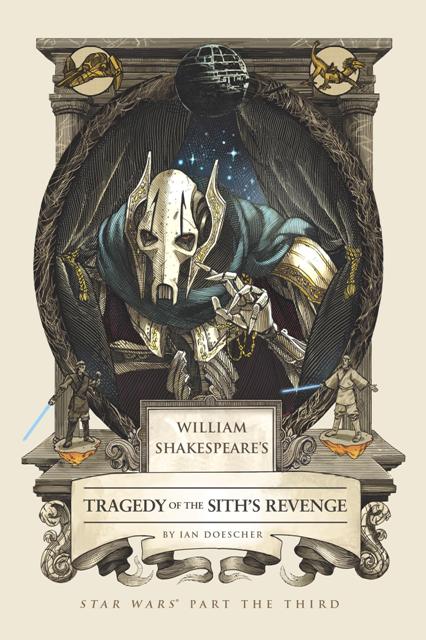 Per Matt
Rounding out the prequel trilogy,
‘Tis the War of Stars, Episode Three.
As if the story, written by Shakespeare,
Revealeth the Dark Side, doth he, with much fear.

Evil steppeth into thine spotlight,
Mayhap to challenge the Jedi with might.
Author Ian Doescher presenteth a Quirky book,
Tragedy of the Sith’s Revenge is a worthy look.

As the novel unfoldeth, ’twas but a dream,
Helpless was he, Chancellor Palpatine.
Shroudeth his motives in a smokescreen,
Forcing Jedi unto his bidding.

Not long for life was Count Dooku,
Soon to be replaced by You Know Who.
Fare ye well, evildoer, double crossed was he,
Alloweth to escape, General Grievous did flee.

‘Twere a game of chess, doth he play, the Jedi Council,
Palpatine lureth Ani to the opposition, well.
Hath loyalties shifteth? Attachment and jealousy, of course,
Skywalker’s prophecy was meant to bring balance to the Force.

Recalling the tale of Darth Plagueis the Wise,
Buying what Palp is selling, Ani opens his eyes.
Cyborg hunting on Utapau Obi Wan seeks the prize,
Kills the cyborg with a blaster, so uncivilized.

For Padme, immortality comes with a price,
A Sith is revealed, Palpatine rolls the dice.
Mace is betrayed, by Ani his arms got sliced,
Darth Vader is knighted after getting enticed.

Order 66 is announced, the clones have no clue,
Most the Jedi are killed, with the exception of two.
Dual confrontations are fought, in a battle of rule,
‘Stead of dueling to the death, the victors withdrew.

So wraps our tragedy, heroes flee into exile,
Vader’s new threads prove he has plenty of fresh, new style.
The franchise continues, who fits the new villain’s profile,
Terrorizing The Force Awakens, that which makes me doth smile.

Notable Quotes:
– “Make haste, be done and all is won!”
– “There is some evil in the air tonight.”
– “I have a feeling bad about this moment.”
– “Come, death: thy name is order sixty-six.”
– “A helpless droid’s a hapless droid indeed.”
– “The Force be with thee till we meet again.”
– “What frightful trick of baseborn hell is this?”
– “I am a man more sinn’d against than sinning.”
– “Those who gain pow’r are most afeard to lose.”
– “The road we walk is fraught with pain to come.”
– “When pride is doubl’d, twice the fall doth follow.”
– “‘Twas not the first time thou hast sought revenge.”
– “Mayhap we two together should retire, enjoy an oil bath and a wire massage.”