Wonder Woman finally appears in live action on the big screen in Batman v Superman: Dawn of Justice. The Amazonian warrior debuted in comic books more than 70 years ago. She is an icon of feminine strength and independence. She’s been the star of her own live-action 1970s television series. And yet the most well-known modern heroine is relegated to a secondary role in her motion-picture debut. So, when did Wonder Woman first meet Batman and Superman in the comic book universe?

Wonder Woman’s first comic book appearance is in All-Star Comics #8 from December of 1941. The story details the character’s origin. Diana is a member of the Amazons, a tribe of women on the remote and isolated Paradise Island. Captain Steve Trevor’s airplane crash-lands on the island and Trevor is severely injured. Diana and the Amazons nurse him back to health. 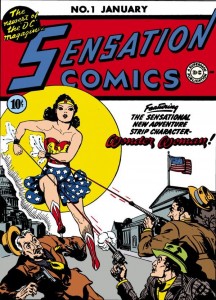 Hippolyte, the queen of the Amazons and Diana’s mother, holds a contest to determine who will return Trevor to man’s world and fight for justice. Diana is forbidden to enter the contest by her mother, but she enters in disguise and wins, earning the costume and title of Wonder Woman. Shortly afterward, Wonder Woman appeared on the cover of Sensational Comics #1 in January 1941 and has been fighting injustice ever since.

Nearly two years later, Wonder Woman joined the early superhero group, the Justice Society of America, premiering in All-Star Comics #13, in October/November of 1942. The Justice Society was DC Comics’ precursor to the Justice League. Even then, Wonder Woman was relegated to an honorary member and the team’s secretary, staying at the headquarters while the male characters went out to stop the bad guys. However, this was due to Wonder Woman’s creator, William Moulton Marston, wanting control over scripting the character. Unable to write multiple books at the same time, Wonder Woman was sidelined. 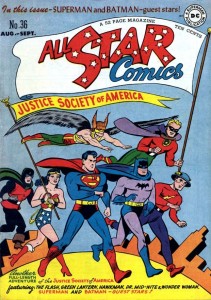 Her first team up with Batman and Superman in All-Star Comics # 36, in August/September of 1947 continued to consign the heroine to secondary status. In that issue, Justice Society members The Atom and Johnny Lightning are injured and sick, respectively. They ask Superman and Batman to fill in their places at the emergency JSA meeting. Batman, Superman and the other Society members individually split up to investigate crime scenes at various cities around the country. Meanwhile, Wonder Woman remains at the headquarters, miniature mental radios from Paradise Island ready and handy, if she has to contact the boys.

Wonder Woman’s stand-alone film is set to premiere on June 23, 2017, once again starring Gal Gadot, with Chris Pine cast as Captain Steve Trevor. The film will detail Diana’s journey from Paradise Island, leading up to the events of Batman v Superman. It is unclear what direction her origin story will take. Hopefully, the film will finally give the most popular female comic book superhero the spotlight she deserves. 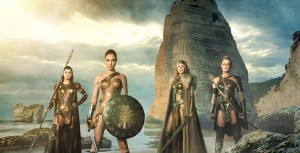 Trivial Side Note: Although Wonder Woman shares the screen with the title characters in Batman v Superman: Dawn of Justice, her feature-film debut is in LEGO form from 2014 — alongside LEGO Batman and LEGO Superman.