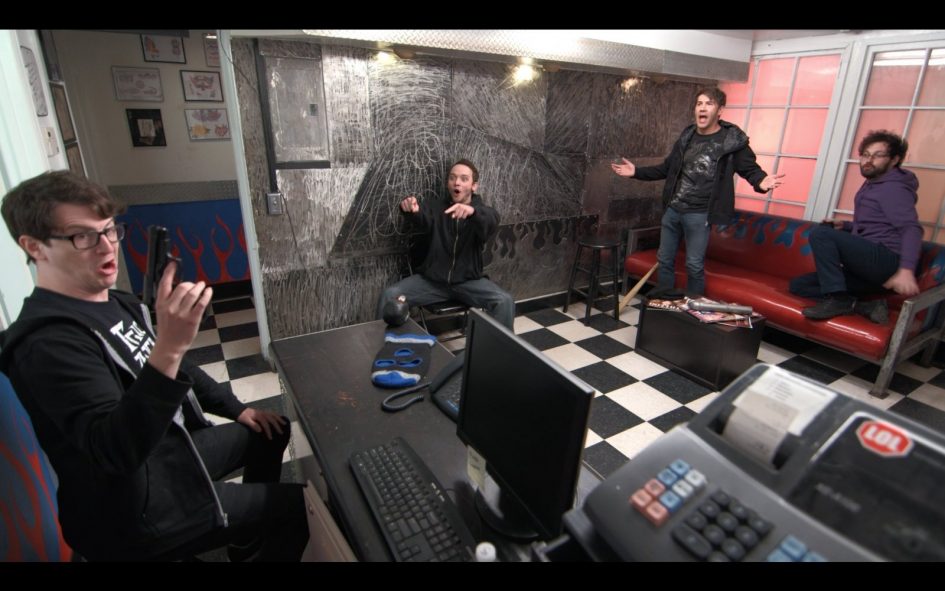 What if you found out that the shop you and your friends run is three months behind on rent? What if you only had a week to come up with $7,000 to save your business? What level of stupidity would you all go to, in order to keep it going?

This week in #HauntLife, I will be reviewing one of the latest Troma Entertainment releases, Worst Laid Plans, a dark comedy from directors Mark Jones and Nesib Shamah, starring Jones, Tim Gouran and Nicholas Anderson.

Worst Laid Plans revolves around four friends who own A-1 Tattoo. After failed attempts to bring in business, the landlord shows up to inform the group of friends that unless they can pay their back rent, he is going to change the locks in a week. Desperate for money, the group finds a quick way to make some money by helping perform sexual acts for a man they found online. However, they decide, instead, to setup an ambush for the guy and rob him of this money. Unfortunately, the plan goes wrong when the man dies during the holdup. Searching the man for money, they only find $6.00. Next, they search his car for more money, only to reveal the body of a female in the trunk. Now, with two dead bodies, the crew decides to bury the bodies, but are caught by their landlord.

During the altercation with their landlord, one of the guys hands over his gun. The landlord, happy to now have the upper hand, calls the cops to have the men arrested. However, the friends are able to convince the cops that the landlord is the guilty party, using an elaborate story. As he is hauled off the jail, the bank calls the friends and offers to let them buy the building, saving their business.

Honestly, I didn’t really know what I was getting into with this film. However, since it was from Troma, I thought I knew kinda what to expect. But with this film, I got none of the typical Troma goodness. And that was a major disappointment.

Without the over-the-top action or special effects that Troma brings, this movie fell flat. The storyline was not very good. Yes, I could relate some with being behind on bills and having someone threaten to take stuff away, but the guys jumped directly into doing sexual acts for money. Most people would look at selling stuff, or calling relatives, or a bank or something. But they decided that this course of action was the easiest. Just wasn’t funny or realistic.

The two main “lovers” in the film had a falling out within the first few minutes that was never resolved. The tension between the two was evidently supposed to be going on before the film started, which led to the breakup, but that was somehow lost in the storyline. There simply was no chemistry.

Special effects where completely absent. Anyone who follows this blog know I love some great practical effects. About the only effect seen in the film was a single gunshot wound. Nothing great to write home about.

Going back to chemistry: I felt there was nothing between these friends. Supposedly, they had gotten together to start this tattoo shop. The dialogue between the group, though, was stale and lifeless. I never got the feeling in the entire film that these guys had ever been friends. If you are close enough to start a business together, you would think they would have a rapport. There was nothing. And it made me feel nothing for their plight the entire film.

I hate to say it, but I have to give this film one out of five stars. There just was nothing I liked about this film. It had the chance to be better. But the storyline suffered from bad dialogue or bad acting. I am not sure which one I can blame more.

Maybe the next Troma film I review will be the one that redeems my faith. Check out the next #HauntLife to see.