Wrapping Up Season 5 of The Walking Dead 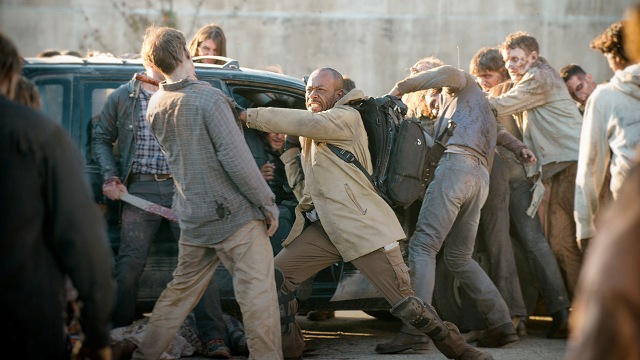 Now that Season 5 of The Walking Dead has wrapped, is Alexandria still a Safe Zone?

So much has happened this year for Rick’s Gang. Who knew the Zombie Apocalypse was so frenetic?

Before the Midseason Premiere aired, Beth and Bob have died and Rick’s Gang has no food, no water and no shelter. According to Executive Producer/Director Greg Nicotero, “It’s going to get worse. People don’t last long, if they don’t have some place to go.”

Wrapping up the last eight episodes of Season 5:

What Happened and What’s Going On
Rick’s Gang has split into two groups. Noah leads Rick and his crew to his house at Shirewilt, a gated community, but it’s been destroyed. As soon as Tyrese speaks the words, “This isn’t the end,” his death was imminent. Soon, Noah’s undead brother bites a chunk out of Tyrese’s arm. Ghosts of dead friends (and enemies) haunt him while he waits to die. Even though his arm is amputated, it’s too late. Rest in peace, Tyrese.

Them
The group is on the move, starving, foraging for food, hurting from recent losses. Randomly, a pack of wild dogs arrive and quickly become a meal for Rick’s Gang. Minimal dialogue, moody music, a wet t-shirt contest and a barn in the woods. “We tell ourselves that we are the walking dead…” And Aaron arrives.

The Distance
Aaron reveals he wants Rick’s Gang to “audition” to join his community. Rick doesn’t want to hear any of it, though. He’s got trust issues. Michonne steps up, decides the group is going to Alexandria, but Rick talks them into going the most dangerous route, at the worst time possible. Rick’s flare as a weapon was a first. So were the boys kissing. Eric sure makes an entrance. Arriving at Alexandria, Baby Judith has been rolling around in the backseat. Surely, Rick will be awarded Father of the Year.

Remember
Upon arriving at Alexandria, Rick mutters, “It’s a good thing we’re here,” then shaves his beard completely off… before having a super-thick 5 o’clock shadow the next day. Settling in, the gang turns in all their weapons. And just like in the graphic novels, Rick and Michonne become the community’s constables.

Forget
This is the Bonding Episode! Daryl and Aaron go hunting together, while the rest of Rick’s Gang mingles with all the Alexandria residents until Carol sneaks out to steal some weapons… and bonds with a hungry little boy, before scaring him to death. Then Rick sneaks a kiss with Jessie, who is currently married. This will surely lead to bad news.

Spend
Noah years to become an architect, Daryl has another motorcycle, Sam becomes a chocolate thief, Abraham bonds with Francine, Dr. Pete has been beating his family, Tara is wounded and Aiden bites the big one after shooting a walker with a live grenade, Father Gabriel becomes a tattletale and Eugene proves to still be a coward. The gang learns how to properly use the rotating door of death, killing Noah in the process. Yet another minority character killed off. This is becoming quite an unfortunate trend.

Try
Deanna tries to unravel two sides of the story that led to Aiden’s death, Rick must deal with Pete, Sasha’s gone killin’ crazy, Carl’s got a girlfriend and the scouts may soon discover Morgan. Quite a busy episode.

Conquer
“Civilization starts when we stop running and we live together.”

This 90-minute season finale wrapped up Season 5 with a bang! Many members of Rick’s Gang have been missing in the past handful of episodes, but in this super-sized season finale, just about each one gets a breath of face time. Abraham has been relegated to the background, which is unfortunate. Hopefully that won’t last much longer and he’ll be teaming up with Francine soon. Father Gabriel has become a certified looney, Sasha sleeps with the undead, Eugene apologized to Abe, but hasn’t done anything since arriving in Alexandria, Michonne reunites with her katana and Pete’s rage kills Reg, then Deeanna allows Rick to put him in his place.

After four seasons of wandering, Morgan has finally reunited with Rick, but arrives with bad timing. Something has changed with Morgan. He seems like a totally different character now, mentally stable and a master of hand-to-hand combat. Don’t mess with his stick! Although only appearing in four episodes so far, neither version of Morgan had a ton of screentime (the mentally unstable vs. the stick fighter), I’m not sure I like this version better than the last one we saw. Hopefully, the change will be warranted.

Carol has become a complex character this year. Melissa McBride has transformed the character we loved to hate, toward one who has an evil edge. We’re actually enjoying the character now and it seems she’s relishing the role reversal.

What’s up with Rosita? She deserves a stronger role and more presence in the storyline. Back when Rick’s Gang merged Eugene’s crew, each of the characters got a partial slice of the season’s storyline. Now, it seems, many have become ignored while the Alexandria tenants have received the lionshare of the storylines.

Looking ahead:
– What’s going on with Glenn? Why didn’t he kill Nicholas?
– Where did Maggie’s Southern accent go?
– How long will Alexandria remain a safe haven?
– When will Rick’s Gang encounter the Wolves?
– And most importantly, when will Negan start to stir up trouble?

Final Thoughts on Season 5:
– Terminus felt rushed. Hopefully Alexandria will last all of next season.
– Of the recurring characters in Rick’s Gang, only Beth, Bob, Tyrese and Noah were killed off this season. Three of the four main players were minorities and two others (Rosita and Glenn) have been practically forgotten about. Why is it so hard for Kirkman and crew to write strong roles for minorities? It seems like each time they get some major screen time, they’re about to die. Maybe Season 6 will bring about a change. Probably not, but there’s always hope.

At the final scene of the Season Finale, the camera angle never reveals who Rick actually shoots. Was it Reg, who was soon to turn undead? Or was it Pete, who definitely deserved it? We will find out next season, in approximately seven months!

Strength: Rick’s Gang must adapt to Alexandria.
Weakness: Every former Alexandria resident feels replaceable.
WTF Moment: Season 6 is about to start filming for The Walking Dead and the spin-off series, Fear the Walking Dead, will soon debut this summer. How many Zombies are too much, for the average TV-watching fan?