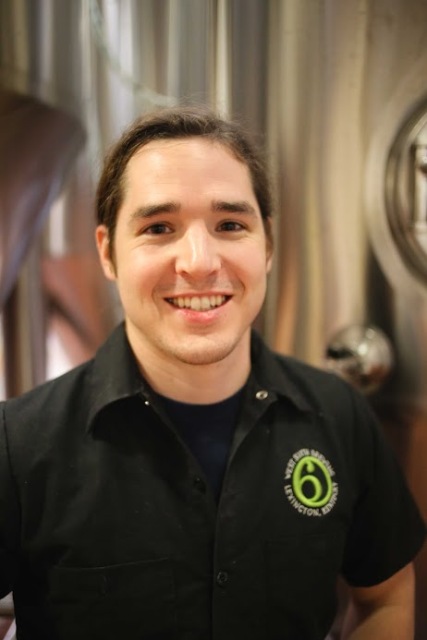 Per Matt
Whenever you’re near the Bluegrass State, you’re never too far from a can of West Sixth craft beer.

Not long ago, I took a road trip to Lexington, KY and made advance plans to visit West Sixth Brewing. This brewery celebrated its third-year anniversary recently, featuring a great taproom and an awesome selection of craft beer. During my visit, I toured the facility and met Andy Smith, who taught me a little about the Lexington craft-beer scene and discussed his brewery’s barrel-aging program.

Please introduce yourself.
– “My name is Andy Smith, I’m the Lead Brewer at West Sixth Brewing Company. I’ve been working here since December of 2012.”

How did you get your start in the alcohol industry?
– “I started homebrewing in 2004, when I was in college and just fell in love with it. I was a finance major and figured out I would rather make beer than work at a bank, so I just went with, after I graduated from UK. Within weeks after graduation, I started working with a craft-beer distributor. From there, I found a job at the Sam Adams facility, in Cincinnati. I worked at Sam Adams for a year, then worked as the Assistant Brewer four four years at Hofbrauhaus, a small brewpub chain based off the original Hofbrauhaus Brewery in Munich, Germany, and then came to West Sixth in 2012.”

What is your flagship beer at West Sixth?
– “Our flagship brand is our IPA. It’s a great hop-forward beer. It focuses on the Citra hop. We’ve got a hop-blend in there, so there’s a little bit of dankness, tropical fruit aromas and flavors that encompass that beer. It has a nice orange color and a malt backbone that backs up the hops; not overly bitter. It’s 7% abv. It’s the first beer that we started canning, here.” 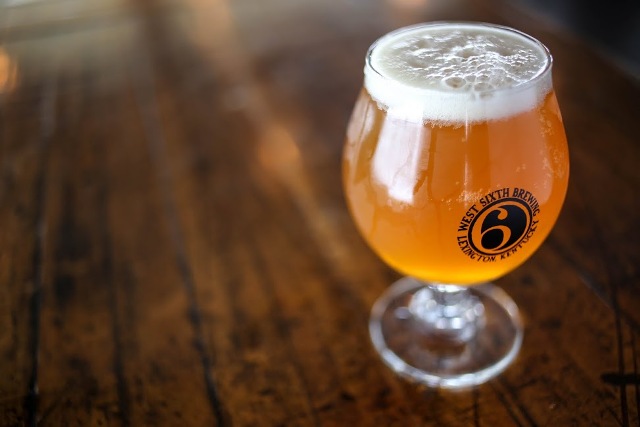 Can you tell me a little about your current seasonal?
– “Our current seasonal is the Belgian Blonde, that’s also canned. The yeast really brings the flavor and aroma profile to this beer. Look for some fruity, estery characters and some peppery characteristics to it, as well. It’s got lightly kilned malts and finishes with a powdered sugar, not-too-hoppy malt crispness.”

What are the local beer trends you’re noticing in Lexington?
– “It’s some of the same trends you see regionally, with the IPAs. Everyone is really into sour or funky beers. There has not, yet, been a local brewery, here, that’s really been turning them out in volume. So, we’re kind of waiting to see what happens with that.”

Do you think dark beers are losing popularity in Lexington?
– “It’s hard to say and I guess it depends on who you are and where you go. In the wintertime, at the right beer bar, you’re going to find over 50 percent of the taps are taken over by dark beers, which I think is great. But you bring up an interesting point: The big trend has been with lighter-colored IPAs. Of course, the black IPA has made its way around, as well. You do see a lot of these lighter-colored beers with many different hop qualities to them, which is unique to each IPA. Dark beers are out there. You just need to know where to look for them.”

I really enjoyed your Winter Warmer. Can you tell me more about that beer?
– “The Winter Warmer was one of the beers slated for the taproom. We did a 15-barrel batch of it and kegged it all up, so that we can serve it here at the brewery. It is kind of brewed in the fashion of an old ale, where it’s very malty. We let the malt characteristics shine through. There were probably five different malts used in brewing this beer. The American hops play a subtle role in the background, but they’re there. You can pick up on them in the flavor, not so much the bitterness, because we really wanted the malt to shine. It’s 8% abv.”

How long has West Sixth been barrel-aging beer?
– “We’ve been barrel aging, pretty much, from the beginning. I think the first bourbon-barrel aged beer we came out with was a brown ale. Today, the one that we get the most excited about is our Snake Eyes Imperial Stout. The Snake Eyes is an 11% Imperial Stout. It has big, heavy roasted-malt character and the barrel-aged form is called Snakes In a Barrel. It’s 13% abv and just super delicious. There’s lots of vanilla characteristics. It’s kind of got a toasted-marshmallow flavor to it. It’s a good winter-time beer. We usually roll that out in January of each year.” 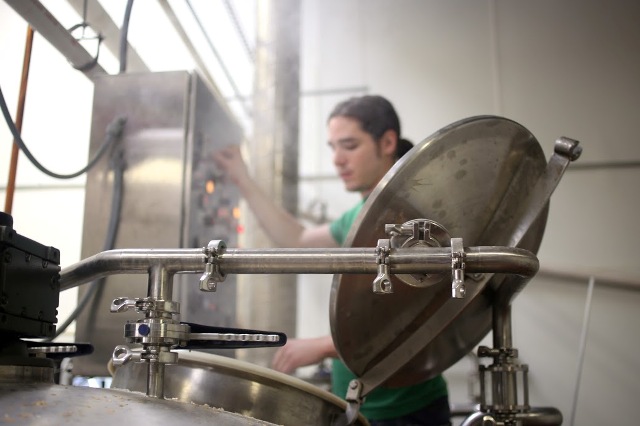 Has West Sixth previously released any sour beers?
– “We launched a bottle-release program. We call it our County Series. I believe we’ve had two releases: The first one was Washington County and that was actually a sour. That was a blend of Saison and Berliner Weisse that we put into a wine barrel and put bugs on it and let it sit. It had a really nice, funky barnyard character and was a 300-bottle limited release. That was really the first sour beer that we turned out, here. Since then, we haven’t released anything that’s necessarily been soured through barrel aging. We do have a Berliner Weisse that we kettle soured. Our second batch of Berliner will be out, here, at the beginning of April. It’s an easy-drinking, light, bubbly Weisse with tart character.”

Can you tell me a little about your canning line?
– “Our canning line runs about 30 cans per minute. Depending on what is needed to be packaged for distribution, week to week, we’ll get this up and running at 7 o’clock every day and runs into the evening for maybe four days per week.”

When did you start canning?
– “West Sixth started canning their IPA pretty much right out of the gate. I don’t know exactly. We’ve been 100 percent focused on canning our product. We do have limited bottle releases, but the beer that we send out into distribution we are most interested in putting in cans. We like the package. We like the recyclability of the product. We like that you can take it nearly anywhere.”

Which beers do you can?
– “We can four year-round beers: Our IPA, Amber, Lemongrass and Cocoa Porter. We just released our first West Sixth Seasonal: It is the Belgian Style Blonde.”

Are there any plans to distribute in Nashville?
– “Currently, at West Sixth, a big part of our business model is really being locally focused, so we are very into being within the state of Kentucky. We’d like to expand as much as we can within the state and stay as localized as possible. We’ve reached into the Cincinnati market because that area feeds into Northern Kentucky. But outside of there, we’re not necessarily looking to expand our markets, quite yet. We’re more concerned with filling the current market that we’re in.” 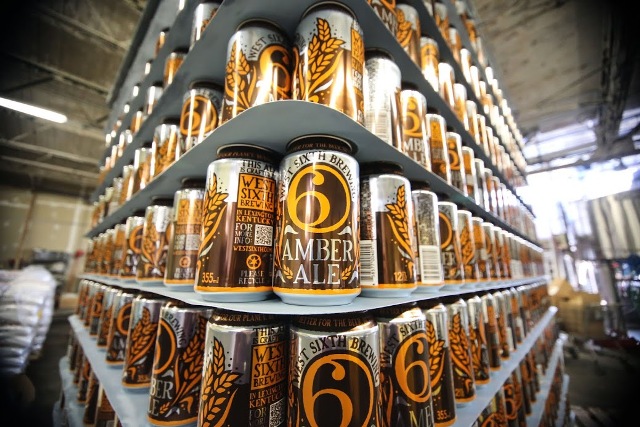 As a Kentucky local, please describe the Lexington craft-beer scene.
– “Currently, we have five craft breweries in the city of Lexington. I would say, five years ago, there was one brewery here: Alltech. Within the same year that West Sixth opened up, Country Boy opened up. Following that, Blue Stallion and then Ethereal is the newest brewery in Lexington. So, it’s definitely booming. It went from one brewery to five.”

Have the different breweries worked together to help the scene grow?
– “Oh, absolutely. One thing that we started, a couple of years back, was an annual release with Country Boy Brewing Company. We call it our Country Western. Last year, we turned out our Country Western Volume 2. We generally release this every year during Lexington Craft Beer Week. So, Country Western 3 will be coming out in May. We’re excited about that and we do a different beer each year. The first year was a 5% pale ale and this year you can probably look for something that’s much higher-gravity than that. We’re always collaborating with them. We talk with those guys pretty frequently to bounce opinions or ideas off each other. It’s always open, between every brewery here in Lexington. And then you even see some out-of-towners come through who are planning on opening a brewery. We open our doors and they see what kind of equipment we’re working with and what our opinions are on stuff.”

“I remember when the guys from a brewery in Southern Ohio called Old Firehouse Brewery came through here, two years ago. Back then, they didn’t have anything, they just had an idea. They just opened up their brewery a couple of months ago. It’s pretty cool to see that kind of stuff from Ground Zero — when it’s just an idea — to walking into that brewery, seeing what they have done.”

What does 2015 bring for West Sixth?
– “The big development, for us, beer-wise, is the expansion of our barrel program. This past winter, we were able to fill a lot of barrels, so look for releases throughout the year in our barrel room. We’re looking forward to canning our seasonals this year, starting with the Belgian Blonde, that we have just released. Overall, we just look for it to be a big year. We like to make it out to events throughout the state. The first big beer fest was about a month ago in Cincinnati but we’re looking forward to the summertime, when more and more events start opening up.”