If you liked Blade Runner 2049 and want to spend some more time in a sci-fi/noir mystery set in the not-too-distant future, I would recommend Altered Carbon on Netflix. Also set in California, Altered Carbon takes place more than 350 years in the future in the Bay Area, as opposed to Blade Runner in Los Angeles in… say, 2049.

Both stories often find their stony-faced, trench coat-clad detective meandering through the city’s underbelly during a downpour. The rain and the squalor are often juxtaposed by giant, moving neon advertisements. Netflix purportedly spent a bundle on special effects for this TV show and it certainly looks better than most shows you’ll find on the SyFy Channel.

Our detective protagonist, Takeshi Kovacs, isn’t looking for replicants, however. He’s on the case to solve a murder… and he’s been hired to solve the murder by the murder victim.

How is that possible?

Enter the concept that makes Altered Carbon so intriguing: stacks and sleeves. In this future, humanity has found a way to put a person’s memories, and everything that makes them who they are, onto a disk called a “cortical stack” or “stack.” This stack is implanted in the vertebrae at the back of your neck. Furthermore, humanity has developed ways to engineer and clone new bodies that are blank slates called “sleeves.”

This means that if you’re wealthy enough, you can keep on living, as long as your stack is intact. Some of the super-rich even have ways of backing up their stacks onto computer. In the case of Laurens Bancroft, played by James Purefoy (who I eventually realized played Mark Anthony on HBO’s Rome), you are backed up by one of your personal satellites every 48 hours. That way, when you’re shot in the stack in your own home and the cops think it’s suicide, you can have your backup put in a new sleeve and hire your own gumshoe to solve the case.

Kovacs might be a little over-qualified for the kind of legwork Bancroft hires him to do. Takeshi Kovacs (Byron Mann, who played Ryu in 1994’s Street Fighter and Chang in AMC’s Hell on Wheels) was actually a… let’s call him a “freedom fighter,” who was part of a group that tried to overthrow the government 250 years before the show begins. His stack has been in prison ever since. Offered a pardon and payment by Bancroft, Kovacs is put into a new sleeve, played by Joel Kinnaman (Gov. Will Conway from House of Cards and Col. Rick Flag in Suicide Squad).

Now, if you’ve seen Suicide Squad, you might have already realized that Joel Kinnaman might not have the acting chops to carry some of the subtler scenes in this series. This is a shame, because Byron Mann does a solid job acting in the flashback sequences, especially during his training scenes and when learning to manipulate the virtual world. Of course, action scenes with either actor are top-notch. 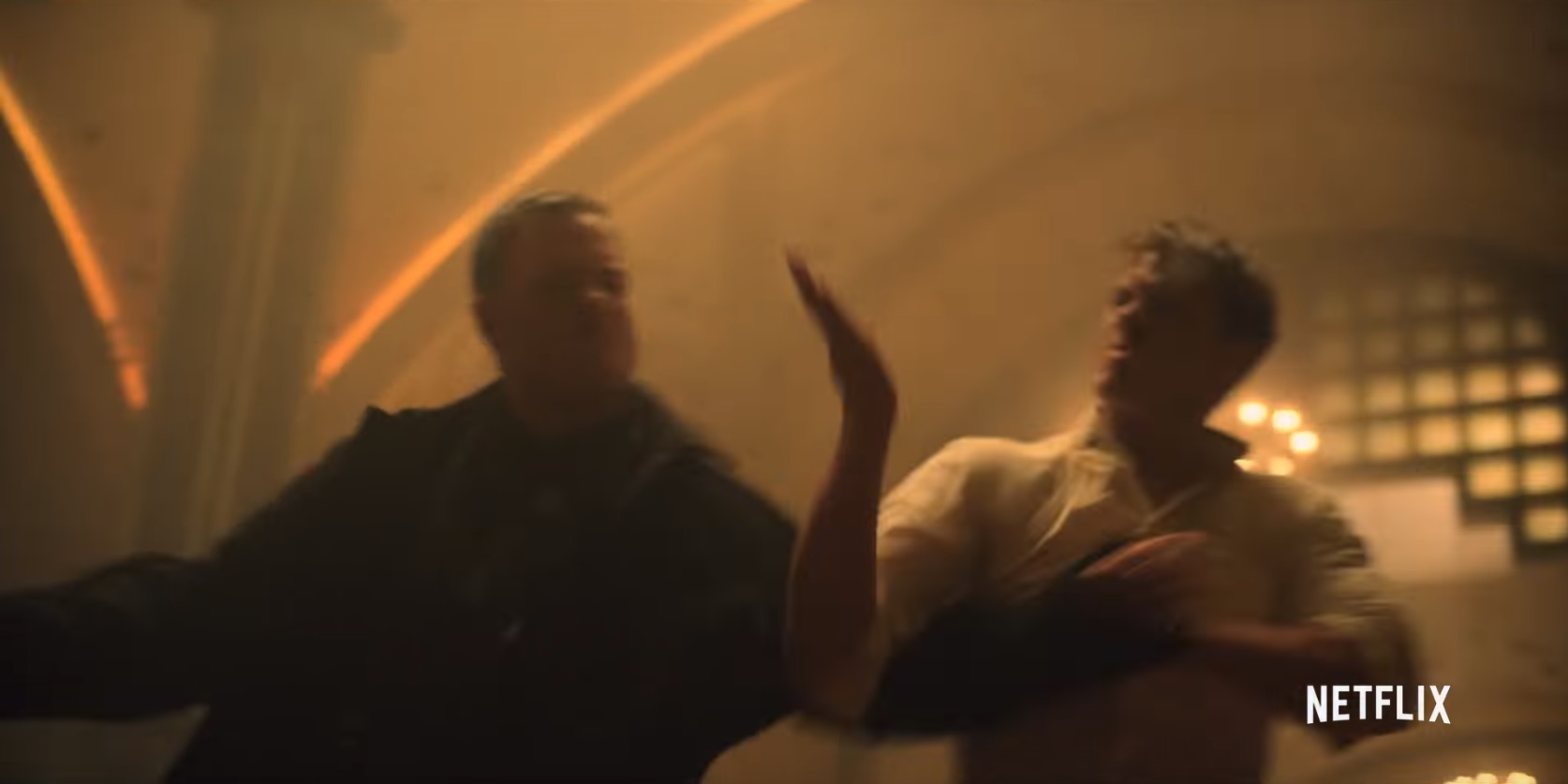 In this world of stacks and sleeves, the series’ showrunners have a sublime solution for replacing actors in subsequent seasons: a stack in a new sleeve. They can put a character’s stack in a new body, played by a new actor. It’s a good thing, too, because it looks like the Joel Kinnaman is jumping ship from Netflix to Amazon. It seems that Amazon is creating a series based on the 2011 film Hanna, which was kind of… meh.

Speaking of “meh,” that’s kind of how I’d describe most of the acting efforts on behalf of this cast. Maybe the script doesn’t give them enough, but I often feel like, aside from Martha Higareda as Officer Ortega and perhaps her partner, Samir Abboud (played by Waleed Zuaiter), most of the cast is either not trying hard enough or they are trying too hard. Sure, there’s the hilarious scene where a tattooed criminal man plays Officer Ortega’s grandmother, after she uploads her grandma’s stack into the tattooed sleeve for a Dia de los Muertos celebration at her house. But by and large, most of the characters are forgettable.

With the exception of Poe.

Poe is the best. Poe is the reason to keep watching this show. Poe isn’t even a real person. Edgar Poe is the proprietor, artificial intelligence (A.I.) consciousness and concierge of The Raven Hotel. He is depicted as — what I can only assume — is some sort of hard-light hologram. His dress, his mannerisms are from a different era entirely and to step into his hotel is like stepping into a hotel in New Orleans. I adore it.

Because Poe is A.I. he is extremely helpful to the investigation. He can sort through death-threat letters to Bancroft at the speed of a computer, shift through security footage quicker than any human, and hunt for digital clues over the internet. Just like how Joi is the best sub-plot in Blade Runner 2049, so is anything with Poe in Altered Carbon. The best is when he interacts with the A.I. of other hotels and similar establishments at a poker table in the virtual world. I just wish the show would stick to the mystery thread instead of getting side-tracked so often.

Altered Carbon is still a good show if you want to spend time in a science-fiction detective world similar to Blade Runner. Flying cars, grimy city and giant neon advertisements — this series is certainly visually impressive. The action scenes, both fist fights and shootouts, are also intense. Its use of technology in the near future also raises all kinds of interesting questions about life, A.I., society and morality. Much like Blade Runner being Rated R, Altered Carbon is more for the older science-fiction viewer, as it doesn’t shy away from showing the underbelly that comes with a noir mystery. I found this foray by Netflix into this genre to be fascinating and refreshing. I just hope they get a stronger script for the second season.