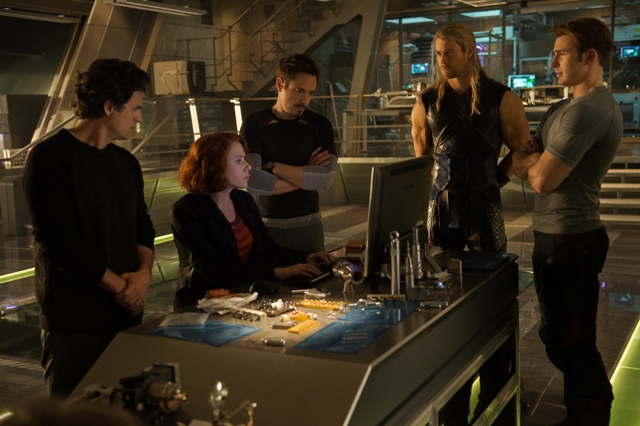 Per Matt
The superheroes of the Marvel Cinematic Universe face a formidable foe as the machines rise in Avengers: Age of Ultron.

Unofficially, the summer movie-going season has begun with Marvel Studio’s big-budget extravaganza. Make no mistake, not many expenses were spared in reuniting Earth’s Mightiest Heroes and sending them onto their second big-screen adventure. Anticipation has been at an all-time high for fans eager to learn what happens next in the MCU and Writer-Director Joss Whedon aims to please.

Fans of Marvel’s Agents of S.H.I.E.L.D. know the small-screen setup that takes place prior to the events in this movie, but you need not be a die-hard fanboy or fangirl to understand what’s happening onscreen.

After discovering a major Hydra base in Sokovia houses not only agent Baron Von Strucker but also Loki’s Scepter, the Avengers prepare for battle. Captain America, Iron Man, Thor, the Hulk, Black Widow and Hawkeye quickly defeat the opposing forces but soon discover a new pair of enemies: The Maximoff twins. Aaron Taylor-Johnson’s Pietro Maximoff doubles as Quicksilver and Elizabeth Olsen’s Wanda Maximoff is better known as the Scarlet Witch. Together, they temporarily give the team a run for its money before eventually escaping.

Back at the Avengers Tower, Bruce Banner (played by Mark Ruffalo) and Tony Stark (played by Robert Downey Jr.) secretly become mad scientists, hoping to create a peace-keeping program so the good guys can actually retire from active duty. Unfortunately, they create an artificial intelligence that’s sole purpose is to wipe humanity off the entire planet, instead. Ultron is hell-bent on human extinction! Will the superheroes somehow stop this mechanical menace and save the day?

James Spader kills as Ultron, both figuratively and literally. Although he voices an evolving man-made machine that symbolizes the movie’s antagonist, Spader’s robot is both highly intelligent and sarcastic. Spader’s choice as the villain was perfect. Not only is his acting great, but his voice is pitch perfect for a killer robot. In the past, he has portrayed many anti-heroes with precision. Here, his character always feels like he’s in control, manipulating everyone in order to do his bidding, without being over the top.

As the Marvel Cinematic Universe keeps expanding, it’s nice to see Avengers: Age of Ultron focus on the humanity of the characters. Mark Ruffalo shines while the spotlight focuses on the human side of the Hulk. Bruce Banner, along with Scarlett Johansson’s Black Widow and Jeremy Renner’s Hawkeye all bring out the human side of these superheroes and make their characters easily relatable to the audience.

While the MCU is starting to feel very crowded, many characters struggle for screen time. Thor practically disappears from the script. Don Cheadle’s War Machine gets a few laughs, Loki is mentioned, Claudia Kim’s Dr. Helen Cho is vital to the storyline but is never really around when she’s needed, Dr. List appears then disappears and Paul Bettany’s Vision may be the best character in the entire movie… too bad he doesn’t really get much of a backstory or on-screen action. Just like in Marvel’s The Avengers, the Hulk goes wild for an extensive amount of time and clearly the Hulkbuster suit is a big deal, here. It’s great to see some European characters portrayed within the MCU and hopefully there will be more good and bad characters to come from those distant countries in future films.

While this doesn’t have the been-there, done-that feeling that recalls the brilliance of The Avengers, it does feel familiar. Sadly, the sequel’s story feels somewhat flawed. I felt more than a little lost at several points throughout the movie, as separate characters move the story along without explaining what they’re doing or even what their motives are. These particular scenes felt incredibly rushed, almost like Whedon was trying to fast forward the slower-moving parts in order to get to the big explosions and fight scenes. This is not good. With so many individual characters crammed into one movie, each one needs more than a few minutes of individual screen time in order to make the movie gel. Unfortunately, the overall storyline suffers because it’s rushed.

Clearly, the CGI scenes required a major percentage of the movie’s budget. When the superheroes team up, it feels like you’re watching a co-op video game battle. There’s a LOT of dizzying, non-stop action throughout the movie. So many shaky-camera shots, I couldn’t tell what was happening half of the time. This was unfortunate, as there are many many battles throughout. But quite a few battles stitched together does not make a complete film.

The Joss Whedon touch is there, but this time around his mega movie feels a tad more generic. Almost as if there’s an entire movie crammed into half the necessary time frame, while the latter half of Age of Ultron is reserved to set up future Marvel movies. While the film does focus a little more time on the relationships between the superheroes than focusing on the battles, once the fights start, they never seem to end. And following the Joss Whedon formula, one of the main characters randomly dies, as usual.

Vibranium ends up playing a key element in the storyline, hinting of the upcoming Black Panther movie, which cannot arrive soon enough. In true MCU fashion, there’s a great mid-credits scene, but no post-credits scene this time around. By the conclusion of the movie, torches are passed to a new group of superheroes. And with Netflix already introducing Daredevil, as well as upcoming series including Jessica Jones, Luke Cage and Iron Fist, in addition to the previously announced upcoming Marvel movies, it’s a good thing Tony Stark eventually builds a second Avengers bunker. There’s a lot of people to house within this ever-expanding superhero universe.

Box-office records will be smashed… that is, until the next Avengers movie arrives.

Strength: Great superhero battles and lots of action.
Weakness: Storyline doesn’t quite feel complete, filled with plot holes.
WTF Moment: A budding romance between superheroes crammed into a movie filled with non-stop action? There’s not enough time to include everything into this movie.