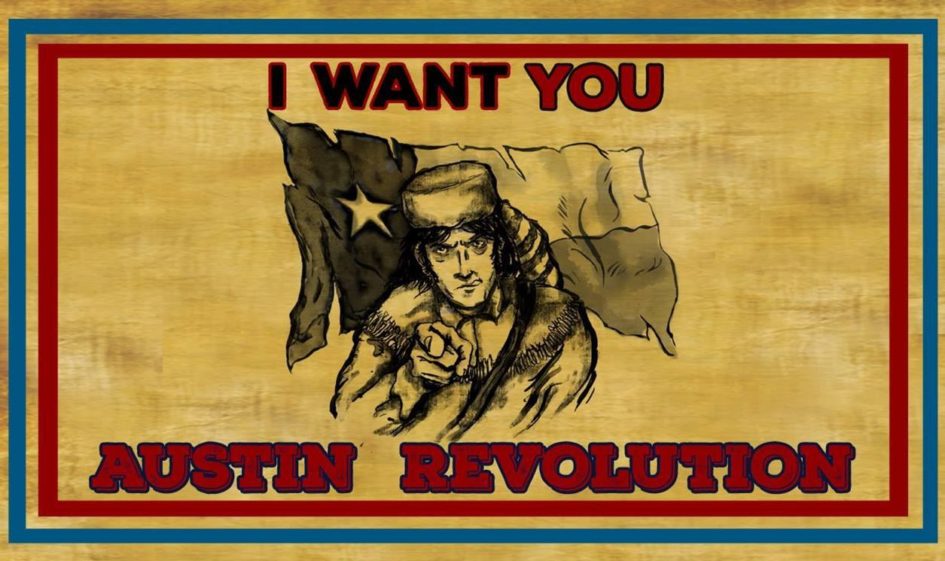 Last weekend I sat down with James Christopher to ask him a few questions about his film festival, the Austin Revolution Film Festival. I was put in contact with him through my pals over at Gothic Films, an independent film distribution company always on the lookout for new thriller- and horror-based movies. The film fest is doing some really special things for horror this year and wants some more great horror entries. Film Freeway gives the Austin Revolution Film Festival a full five-star rating. Final deadline to enter is June 30th, so hurry up and submit your film!!

What made you want to start a film festival?

– “We started the AUSTIN REVOLUTION FILM FESTIVAL six years ago. We started it after having made a half dozen indie features of all genres, ourselves. We had a bunch of festival success right from the start, but we never got into a festival in Austin. We looked around and realized, at the time, the fests we wanted to play were all big and catered to Hollywood indies. None of them really were looking to play that kind of low-budget, true indie film festivals in town. After being on the road for years, seeing a bunch of great films that weren’t getting played in what is a really great indie film town, we tried to fill the void. Six years later, I think we have.”

I noticed on your website you want to honor and promote Veteran-made films or films with a Veteran theme. I have never seen that before. What made you think of this?

– “I’m a seven-year Army vet. I was a Forward Observer for all those years, including a long deployment in Bosnia. Leaving the Army due to injury and going to college as, essentially, a 30-year-old freshman was tough. Maybe the toughest thing I’ve done in my life.”

“I was studying history and was going to be a high school teacher, but I had always had this ‘dream,’ this thing I wanted to do, which was write. So, I called my wife and we talked about it. And we agreed that I should take a shot at getting into the film school at the University of Texas at Austin. It’s pretty competitive, but I submitted a writing sample and I got in.”

“That struggle, to basically give up a large percentage of your life, kind of limits your options on what you can do, or at least your perception of what your options are. It’s a tough choice to make and I thought it was something that, with our festival, we could shine a light on. So, we named the award the ERIC ADAIR VETERAN FILMMAKER OF THE YEAR after a buddy of mine who served with me and then became a huge supporter of ours. We’re very proud of it.”

How do you guys try to be different from most festivals out there?

– “I think, for us, we’re different because we recognize who we are, what our core mission is and we execute that. We’re about the ‘revolution’ of indie film. The idea that we can elevate what we’re doing to increased visibility. So, everything we do is to that end. We put an emphasis on storytelling for our selection process. We don’t emphasize the importance of names in a movie. We’re not against them, but we’re also not going to take a movie that is of a lower quality just because a ‘name’ is in it.”

“When you get in, we’re all about two things: communication and networking. For communication, we accept our films about two months out and then stay in constant contact with our filmmakers throughout, letting them know about the fest, what’s going on and even what to do in Austin.”

“When the festival comes around, we really like to focus on making sure filmmakers get to know each other. It’s beneficial to meet others sharing your struggle and you never know who you might collaborate with down the road.”

So, you guys are looking to get more horror entries into the festival. How do you feel entering your festival will be a plus for horror filmmakers, compared to all of the other fests out there?

– “Well, I love genre festivals. I’ve made several horror films and always play genre fests. Folks out there should definitely submit to the NIGHTMARES FILM FESTIVAL. We’ve played it before and just love it.”

“But I also think it’s good to get you work out there to fests other than horror fests. I think it’s important to see what folks in other genres are doing, expose yourself to new fans and all in all, broaden your horizons.”

You mentioned to me a special, fun horror film night during the festival. Can you tell me more about this?

– “Yes. We have a few things planned for our horror content. Chief among them is our screening block at the BLUE STARLITE URBAN DRIVE-IN. It’s going to be a blast. Both of our LATE NIGHT screenings are horror films. We basically have that set up as our boozing hour. One film will be in the ‘Whiskey Room,’ the other in the ‘Tequila Room.’ Fans watch the movies and we spend a few hours pouring shots!”

What is the biggest trend in film that you have noticed from new and independent directors through your festival?

– “I think more and more of them are focusing on human stories. Last year, we played a film called Funeral Day and a film called Unimaginable. One film dealt with testicular cancer, the other with same-sex domestic violence. The movies couldn’t have been more different, except for one thing: they dealt with real people that we can really focus on. Across all genres, I love that that is the direction stories seem to be going again.”

What one thing would you tell filmmakers who are submitting to your festival?

– “We take your film seriously. We take the money you’re spending seriously. Currently, we’re the No. 1 reviewed festival on Film Freeway. We got there because we really care about filmmakers and their process.”

What do you think your audience expects?

– “The Austin audience is pretty sophisticated. They want to see compelling stories and direction that sets out to make something unique that connects with the audience. They’re passionate and they want to see that passion reflected in them, back on screen.”

What is the best film you have seen in the past year that really excites you, film wise?

– “So many. If I’m talking about ‘bigger’ films, I really dug Hell or High Water. I liked how raw it was. Such great dialogue. I also really, really dug Get Out. Beyond the social aspect, I just loved how suspenseful it was and how it played like a classic horror film in a bunch of ways. On the indie level, there are so many ‘gems’ out there. We got a film submitted to our fest called I Love You So Much It’s Killing Them that was smart, funny and really bloody.”

What is your favorite part of your job?

– “Handing out awards. There is something about calling a filmmaker’s name, who maybe didn’t expect to win, and seeing their work recognized. I love most things about it. I hate having to send rejection letters. I’ve gotten enough of them to know how it feels.”

– “We’re just excited to be allowed to do what we’re doing. We believe the hard work that goes into making indie films should be recognized!”