Fear The Walking Dead Preps For a New Terror 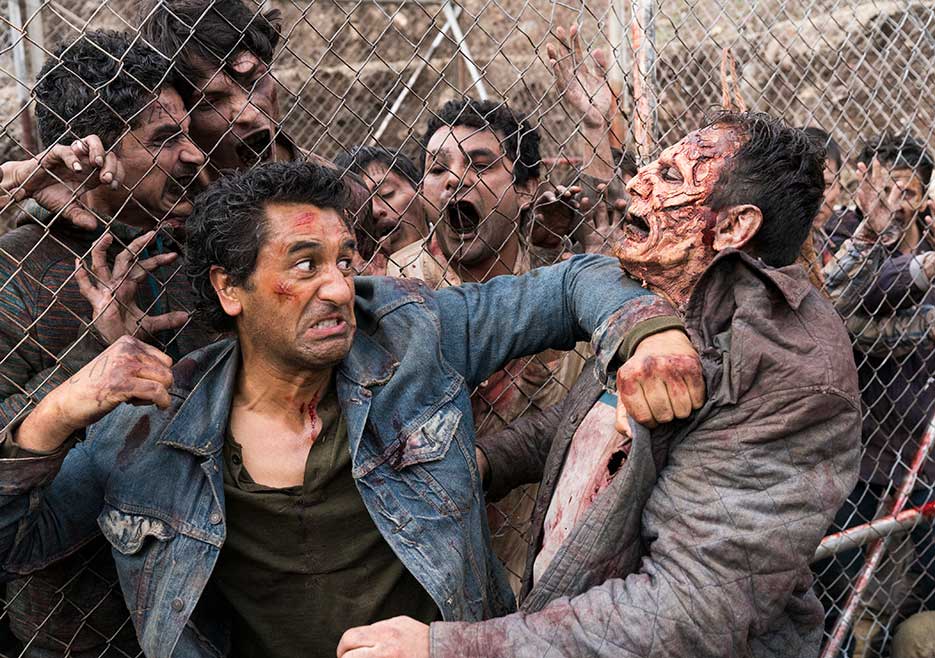 Fear The Walking Dead returned last night with an intriguing storyline for Season 3. In the two-hour season premiere, the main characters are no longer biding their time on a boat or being holed up in an ocean-side hotel. Now they’re dealing with doomsday preppers.

In the first hour-long episode, “Eye of the Beholder,” we open with Maddie, Travis and Alicia taken as hostages into a military base, where Nick and Luci (who is badly injured) are already held. Being held in different locations, they’re not exactly sure what’s going on. Bit by bit, they learn about their surroundings and their captors. Here, all the sick and maimed are killed. After getting “processed” and a brief family reunion, Nick and Luci escape via narc tunnels, while Travis excels as a gladiator in a pit fight with the infected. Troy, the leader of the group, almost loses and Eye to Madison (who has officially become the bad ass of the show), releasing everyone from their shackles before an undead horde infiltrates the base. Madison and Nick fight off the invading undead hordes while the rest escape via helicopter.

“The New Frontier” opens the second hour, as multiple gunshots bring down Eagle One, which is flying too low. Travis has been shot and the big reveal… he was previously bitten in the undead pit fight. A brief pause is followed before his body falls out of the chopper. ALL OF THIS IS REVEALED IN THE COLD OPEN! This was definitely not expected and is absolutely a thinning of the ranks. It’s also the best opening in the TV show’s brief three-year history. This family has gone through a lot, losing two family members within a brief amount of time (Chris died near the end of last season as well), and almost a third one to drugs. It’s not a stretch to think they are cursed.

When the motorcade arrives at Broke Jaw Ranch, the survivors learn about the developments of the helicopter. Jeremiah Otto (Dayton Callie) is the owner this self-sufficient community that was built by preppers. Troy (the hothead) and Jake (the more level-headed one) are his sons. After some tension and uneasiness, Jeremiah welcomes Maddie and her family into the camp. In Strand’s brief appearance, it’s revealed that he’s still isolated at the Mexican hotel, but now he’s playing doctor. After allowing some random, injured people into the hotel and delivering a baby, Strand’s been excommunicated. He exits Stage Left in a green Jaguar, before he can do any further harm. Where’s he to go? No one knows. But he sure leaves in style.

“This is the safest place to live, in a world gone mad.”

For two seasons, Travis was the central focus of the show, balancing life between two families. Now, Madison becomes the main character, as she’s become the the bad ass leader of the family. I really liked the introduction of Old Man Jeremiah. He’s detail oriented and always calm in the face of adversity, unlike his hot-headed son. Nick doesn’t trust any of the preppers, especially when they don’t initially allow the unconscious Luci into their camp. And Madison decides the family will stay at Broke Jaw Ranch and make it their home… even if they have to take it over. Possible foreshadowing or red herring? To be determined…

What We Learned: “Undead procreation” is a thing. Spouses don’t live long in either of Kirkman’s TV franchises. And there’s also a bit too much shaky cam for my tastes.

Looking forward to learning more about these preppers.