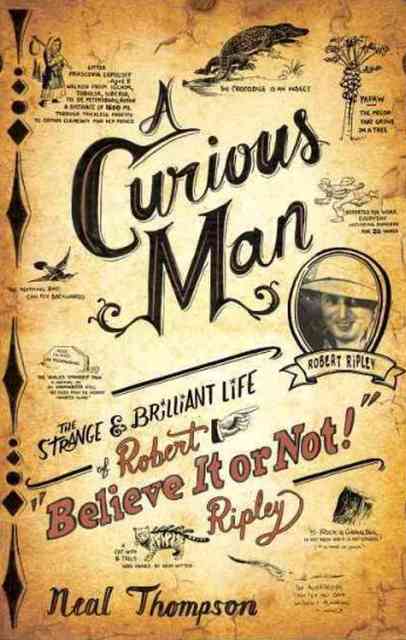 Per Matt
Robert Ripley’s rags-to-riches journey becoming one of America’s first media celebrities is almost as bizarre as some of his unusual (but truthful) cartoons.

A Curious Man is part oral history and part biography, with so many strange-but-true twists you’d swear it was fiction. But just like Ripley’s Believe It Or Not!, sometimes the truth is stranger than fiction!

As a young boy, LeRoy Robert Ripley — his given birth name — was socially awkward. He grew up in Santa Rosa, CA, where the unusual was acceptable and people could be peculiar, but still be successful. Ripley overcame shyness, buck teeth, stuttering and dropping out of high school to become a newspaper cartoonist. His art was featured in the paper’s sports section, but it was not refined, eventually leading to his dismissal. After getting hired to draw for the third newspaper in three years, he honed his craft, eventually focusing on Champs and Chumps as a concept, which featured unusual sports feats.

Gaining notoriety in the emerging newspaper cartoon industry, he covered the 1920 Olympic Games in Antwerp, Belgium, always searching for strange facts and unusual faces to feature in his column. Ripley celebrated weirdness, becoming one of the most widely read syndicated cartoonists and eventually one of the greatest world travelers of his day. After covering the Olympics, he was sent on a trip around the world. The writing style of his travel journal was very similar to today’s blogging. He was always looking for an adventure (and alcoholic drink) during Prohibition time.

During the Depression, Robert Ripley became a voice for the people. At its height in popularity, Ripley’s syndicated panel was read by 80 million people and was an affordable diversion during the Great Depression. Focusing on the peculiar, he appreciated and often went out of his way to find the eccentricities of the world. This became the Believe It Or Not concept. Ripley prided himself as being a noble truth-teller, even if it was an unpopular opinion. He was part P.T. Barnum, part Howard Hughes, always reveling in is true tall tales and loved being called a liar, explaining his claims in later columns.

Believe It Or Not had instant success in its newspaper medium, later spawning books, movies and TV shows of the same name… and Ripley’s Odditorium at the 1934 Chicago World’s Fair caused quite a media frenzy.

Along this journey, Ripley worked with innovative artists and writers, including Jack London (The Call of the Wild), Rube Goldberg and later a 14-year-old Charles F. Schulz. When he wasn’t working 16-hour days, he was socializing at speakeasies with celebrities and lovely ladies. He was eccentric throughout his travels and personal life, but especially concerning his love life. After a failed marriage, he had overlapping relationships with his many secretaries — sometimes referred to as his harem — further accentuating his personality.

Ripley was an true innovator, sending the first-ever transatlantic cartoon transmission via radio facsimile and when he revealed America had no true national anthem, he spurred President Hoover into making The Star-Spangled Banner official.

Two world wars and the Great Depression hardly slowed him down, but too much partying and a massive heart attack prematurely ended his life.

A Curious Man uncovers Robert Ripley’s professional life, but I would have preferred to learn a little more about his personal demons. There’s some great black-and-white photos on display and some fun Believe It! factoids scattered about the book, inserted whenever relevant.

The only complaint I have about the book is its abrupt beginning. The preface jumps midway into one of Ripley’s adventures with nary an introduction, which is awkward… much like Ripley, himself.

Today, his cartoon continues as one of the longest-running in history. From social outcast to globe-trotting millionaire, life was never dull for Ripley. He was truly a curious man.

Notable Quotes:
– “I think mine is the only business in which the customer is never right.”
– “If I hadn’t hit on a lucky idea, I’d have been just another cartoonist.”
– “The youthful obsession with fitness had been fully sacrificed on the altar of fame.”
– “The shy, awkward misfit-loner had become champion of the freakishness of others.”
– “People frequently disappointed him — women, employees, even his brother — but nature, and his dogs, rarely let him down.”