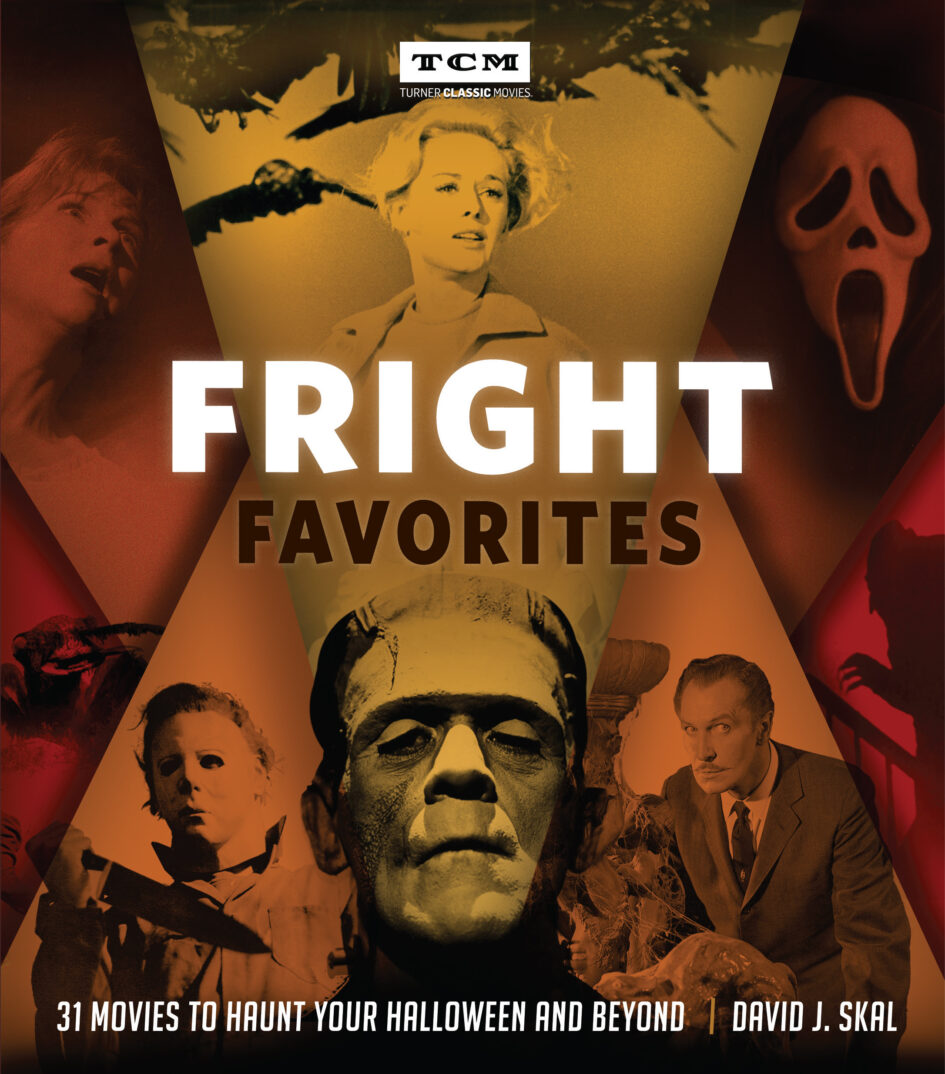 Per Matt
Halloween offers something for just about everyone. From the frights, to the costumes of symbolic characters, to the jump scares, to the classic movies we enjoy rewatching, even to the laughs they may bring. Author David J. Skal has teamed up with Turner Classic Movies to shine the spotlight on a variety of horror icons throughout the spooky season. You may have previously seen the actors, but did you know how they became Fright Favorites? This engaging book brings 31 of his Fright Favorites to the public, in hopes of enhancing the holiday and beyond.

Fright Favorites offers a compendium of film frights by including very attractive set photos (as well as some great themed photo shoots), along with not just stories of the actors involved, but behind-the-scenes tales and the studios’ quests to bring the films to life. As a lifelong box-office watcher and cinema aficionado, I was enthralled with the selections, maybe even more so with the similarly themed alternate choices that he also encourages the reader to watch. From silent films to the monochromatic and even today’s adventures in HD, many great selections are highlighted.

Much more than just the Universal Monsters (although they receive plenty of credit in popularizing the genre), reading about these classic movies is informative and learning about how these actors were awarded their roles is most fun for a movie trivia fanatic like myself. I have previously watched quite a few of these gems throughout the years, but most recently I’ve been watching (and rewatching) them via the Svengoolie TV show. Author Skal is pretty good at offering a healthy dose of comedy and fun facts thrown in along the way, making each article feel less like film school and more like an enjoyable read (although the book should be studied in a variety of film studies classes).

When asked how the featured films were selected for this book, he responded: “I came up with the original list, and of course the people at TCM are quite knowledgeable about film and made many good suggestions, as well. But in the end, we had to add a ‘You might also like’ selection to each of the 31 main entries. We knew the book wouldn’t be a comprehensive encyclopedia, but we did want to present a good cross-section of a genre that has become quite diverse. My main consideration was, what films would provide a good introduction to readers who have a general knowledge of horror entertainment, but would like to know more.”

You might be surprised with his favorite Halloween-themed movie: “Halloween III: Season of the Witch is a personal favorite. It’s the only installment of the John Carpenter-based franchise that doesn’t include the slasher, Michael Meyers, but is instead a deliciously sardonic story of an attempt to hijack the holiday, itself, by supernatural mind-control.”

And just in case you were wondering what kind of Halloween traditions he enjoys… “Ever since I started writing books about monsters, vampires and Halloween — which was 30 years ago — I rarely get to celebrate Halloween myself, because I’m inevitably on the road the whole month, attending fan conventions, giving college lectures and doing bookstore signings. But during years when I have a break in the schedule, I like traditional, home-made, hands-on activities like pumpkin-carving parties. If you’ve never thrown one of these yourself, I really recommend it!”

I could read an entire book only based on the actors who brought these classic films to life, but this book offers contemporary films as well. The final chapters featuring more modern releases feel a little out of place. I would love to see separate follow-up books featuring only horror releases of the ’70s, ’80s, ’90s and 2000s. That way, each book could be more in depth and dig up some serious cult classics. And if Fright Favorites proves successful enough, there might be future releases in store for the horror community to enjoy.

“I hope the book does well enough that I’m asked to produce a sequel, since there are so many classics I’d love to discuss, as well,” said Skal.

I could even see this book adapted as a horror documentary series in the vein of Eli Roth’s History of Horror, which I absolutely adore. It could air on Turner Classic Movies, naturally, possibly on a late night weekly schedule, deep diving a variety of topics and filmmakers.

And if ever invited to discuss his thoughts on how classic horror movies compare to current ones, Skal responds: “There are only so many basic horror plots and narrative conventions, which are endlessly recycled and recombined, so it’s never really a matter of old versus new, but rather the methods by which stories are told. I don’t think big budgets and computer-generated effects have necessarily been a good thing for horror overall, and it’s heartening to see how successful indie studios like Blumhouse have been, doing more with less, just like Val Lewton and so many low-budget auteurs of the past. Horror is most effective when we actively participate, contributing most of the menace from the dark corners of our own minds.”

After really enjoying Fright Favorites, I look forward to getting more spooky chills by the author and hope to read Skal’s other books in the future.