Game On! Thrones is Back and Better Than Ever! 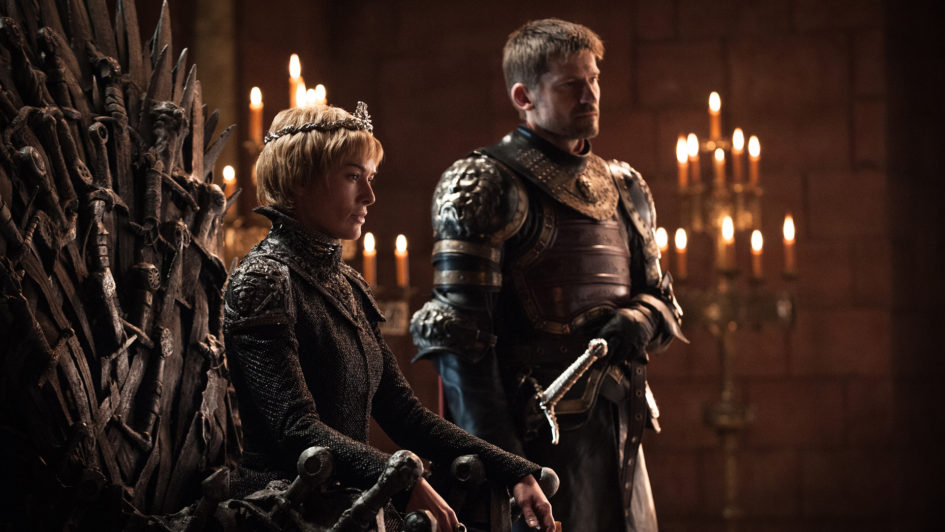 A Song of Fire and Ice is heating up and winter has definitely come for the House of Frey. Episode 701, the 61st, of HBO’s Game of Thrones debuted Sunday, July 16. Entitled “Dragonstone” the episode is extremely well-written. It brings the proper amount of exposition to let newbies know enough to follow the action and the characters’ interactions, while reminding us old-timers just what the true stakes are.

Sorry, I didn’t have time to search, download, and upload a bunch of pictures. You should know what these folks look like by now, anyway.

This is a truly great beginning to the seventh and penultimate season of the greatest show on Earth. The episode picks up the story threads of ALL of the major characters and advances them significantly. Remember, there will only be seven episodes this season when there have been 10 episodes each for the first six seasons, and there will be only six episodes for the eighth and final season, hopefully next year.

The rest of this blog will be a totally spoilery recap and commentary overview of the episode. Stop reading now if you haven’t seen the episode or if you don’t like spoilers.

Arya is back for a truly cold open, and kills at the outset; kills all of Walder Frey’s men, that is, by mask-querading as the duplicitous fat bastard and poisoning them by the dozens. “The North remembers and winter has come for the House of Frey.” Our little assassin has crossed over into mass-murder territory now, so all bets are off as to what Arya might do.

After the new opening credits scene with Dragonstone prominently featured, we get a look at the threat from the North and it is HUGE — literally. Wun Wun as a Zombie brings one of our greatest fears to, well not life, exactly, as the Army of the Dead has really grown and is on the march. Running from them, Meera Reed and Bran arrive at the Wall; they “hold the door” open for them and let them in.

Two brother-and-sister clashes follow, as twincestuous Jamie and Cersei get into it — a discussion that is, about how the Queen of the Seven Kingdoms really only has three, with four of them being enemies surrounding them — the Dornes and Elyria’s House Martell on the South, Olenna and the House Tyrell on the West (who control the wheat and livestock), a bunch on the East including the Dothraki, and the the Starks and Jon, King of the North.

Speaking of Jon Starkgaryan, his sister, Sansa, is fed up with being overlooked and starts some shit in the war council in the scene before that. Fortunately, the 12-year-old voice of reason, my girl Lyanna Mormont, makes them play nice, and accept girls as soldiers in the upcoming fight, once again delivering a smackdown to Lord Glover. Jon decides not to punish the children of the houses pledged for centuries to the Starks, whose idiot parents sided with the Boltons in the Battle of the Bastards. Hell, they already died for their own crimes, why punish their innocent children? So, he made cute little Ned Umber and Alys Karstark pledge fealty to House Stark “now and always.” Afterward, as Jon and Sansa were talking, and Sansa started out complimenting him with a compound sentence with a “but” in it, Jon cut that shit short and recalled a saying of Ned’s that he had kept from his daughters: “Everything before the word but is bullshit.” That was hilarious.

One lowlight of the episode is the cringe-worthy WTF? overture to the Cercei scene where Euron fucking Greyjoy is at his full-on smarmy rat bastard idiot Mad King best trying to get her to consider marrying him. It is hilarious! As Jamie points out, this is the motherfucker who attacked the Lannisters, fled the battle at his keep, killed his uncle, and is on the run from his brother and sister, but wants us to trust him? Cercei kicks his ass to the curb, but he says he’s not giving up, and is gonna go out and get a gift for her that will change her mind. Oh, shit! This won’t end well — for somebody.

Speaking of potential hookups, seeing Tormund Giantsbane distract Brienne of Tarth during a sparring session she was having with Pod, and Pod finally actually lands a blow; so then she konks him and tosses him into some stuff on the ground and walks off; that was funny! Those two really need to get together! 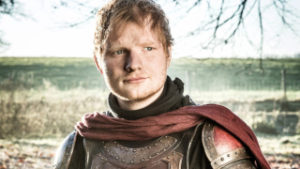 Oh, by the way, my boy Ed Sheeran has a nice meaty role, both as a performer singing a relevant song with his mates roasting rabbits, and talking to Arya as she meets them while making her way to King’s Landing. It is so funny when they ask her why she wants go to that shithole, and she says, “I’m going to kill the queen.” They laugh; she’s serious; it’s hilarious!

The Hound is hanging with that motherfucker who just won’t stay dead, Beric Dondarrian, and the sumbitch who keeps bringing him back to life. Their crew stops to spend the night at the house where Clegane had killed a man and his daughter for the man’s silver while traveling with Arya a few seasons back. After looking into flames and having a vision of the Army of the Dead arriving at a castle on the water with a mountain that looks like an arrowhead, he goes out into the snowy night and buries the two bodies.

All in all, while much of the episode had serious elements to it, the only deaths were the fucking treacherous Frey fuckers in the beginning sequence. And, dammit, no boobies! This episode has no fucking nudity. It really had a lot of humor and was well-paced and set up a season of action and interaction to look forward to. The Hound’s cursing was kinda excessive; he must have used “cunt” a gazillion times. Overall, I think I found more to laugh at in this episode than in any other previous episode the entire series? What do you think?

Sam Tarly’s shitty work at the Citadel library is really paying off. I loved the way they depicted the mundanity and repetitive nature of his life there, and emptying the nasty, stinky, literally shitty bedpans and washing pans for food and for excrement that I literally couldn’t tell apart. He makes a critical discovery that Dragonstone, Dany’s Targaryan ancestral home, is sitting on a mountain of dragonglass, you know, the shit that kills white walkers. Thanks, Gilly, for showing him the page with the info (love that wildling!) in the book “Legends of the Long Night” that he stole from the Maester’s-Only locked-up off-limits top-secret part of the library after he had snuck into the Grand Maester’s room and stole the keys. We find out that Ser Jorah is still alive, but is a captive or patient or subject, anyway, his ass is locked in a cell, at the Citadel. In a moment that made me jump and scream out, he reaches a badly greyscaled arm out to Sam through a cell door food tray window to ask, “Has she come yet? The Dragon Queen… Daenerys Stormborn?” which brings us to the finale.

Dany’s fleet arrives at Dragonstone, and Drogon and his two siblings fly overhead as she, Tyrion, Missandei, Grey Worm and Varys disembark together, and begin to lead the long climb up to the massive, imposing castle at the top of the mountain (that looks like an arrowhead on the sea, maybe?). Don’t ask me why she didn’t ride / fly up that long ass way on one of her dragons / I don’t know… something about leadership, maybe she wanted to savor her return home after so long. She did put her hand flat on the sand / ground when she got on the surface and felt the texture of her home soil very poignantly looking up at her home, sweet, home.

Once they got all the way up into the castle and entered the throne room, Dany slowly approached the throne. I really loved the way Grey Worm’s instinct was to follow closely, but Missandei grabbed his ass (arm, technically) to non-verbally but lovingly say, “No, Dude, this is her’s and her’s alone — let her do this.” Eventually, Dany made her way into the war room, off the throne room, and surveyed the planning table and the war council chamber. Finally, to Tyrion, her Hand, she gave that magical line that I love to hear Benedict Cumberbatch (please give him a role before this series ends!) deliver, either as Sherlock or Khan, “Shall we begin?”