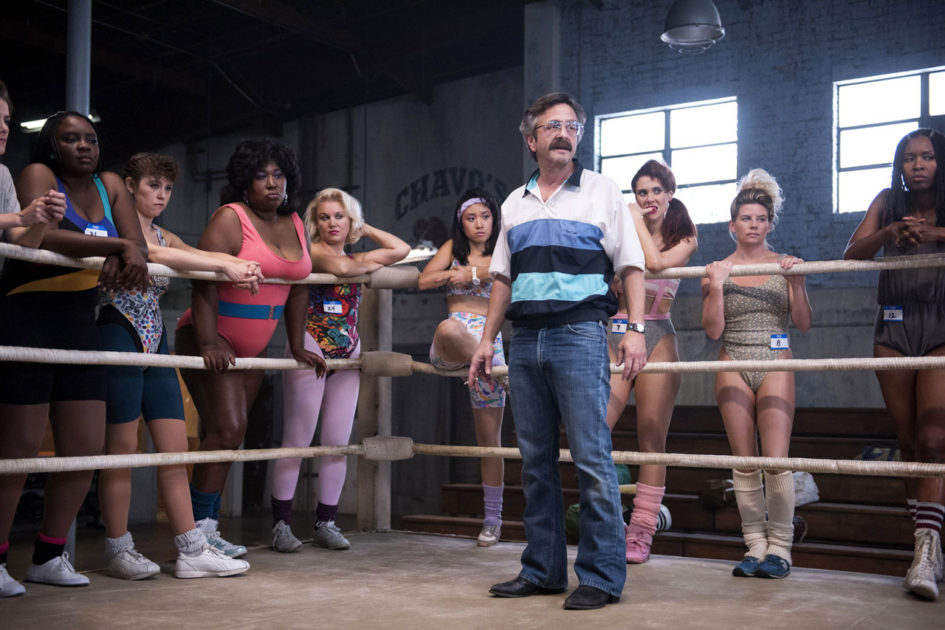 Welcome back to #HauntLife. This week, I am going to give my thoughts on the Netflix series, GLOW. Yes… GLOW. I know, you probably are wondering what this has to do with haunting and horror and such. But just ignore that stuff.

Growing up, wrestling was a huge part of my life. As I mentioned a few times, my dad got me into watching Hulk Hogan, Roddy Piper, Jake Roberts and all the other larger-than-life characters from the ’80s. It was truly what I believe was the golden age of sports entertainment. Big, tough guys beating each other to a pulp night after night. What more could a pre-pubescent boy want?

You guessed it. Women in skimpy outfits.

So, in 1986, I found the Gorgeous Ladies of Wrestling, or GLOW. This TV show had the same character types the WWF and NWA had. There was the American patriot. There was the evil villain from the deepest darkest of Africa. You had the heroes who came in to save the day, who would not cheat or take shortcuts to win the match. And you had the villains who looked for every chance to bypass the rules and win the match, by any means necessary.

The only difference? Yes… they were women in skimpy outfits.

As sudden as it started, GLOW was gone. One night it was on. The next night it was no more. In those pre-Internet days, I had no way of finding out except from magazines like Pro Wrestling Illustrated — the only magazine our local grocery store got. While I never bought an issue, I spent many a Saturday morning reading the magazines at the store while my mom went shopping. But even that magazine had nothing explaining what happened.

Years passed and GLOW faded out of my memory. That is, until Netflix decided to bring back a version of the show.

The GLOW series is a Netflix original. The story is a fictionalized behind-the-scenes account of the ’80s television series. The show primarily centers around Ruth Wilder (played by Alison Brie). Ruth’s acting career is struggling when she receives an invite to an audition for a new wrestling promotion called the Gorgeous Ladies of Wrestling. When most of the women who showed up for the audition walk out after meeting the director, Sam Silva (Marc Maron), Ruth finds herself with the beginnings of a pro-wrestling career.

Ruth’s personal life comes into her wrestling life when her best friend, Debbie Eagan (Betty Gilpin), discovers that Ruth has been having an affair with Debbie’s husband. When Debbie shows up at practice and proceeds to have a catfight with Ruth, both find themselves on the road to becoming the top stars of GLOW.

Ruth and Debbie have their share of difficulties finding their way into the wrestling business. Ruth has a hard time finding a character that she can play. Debbie finds it hard to work with her ex-best friend after the heartache she has been put through, plus constant interference from her husband to rectify their differences. But both realize that they need each other to succeed.

While GLOW focuses on the relationship and struggles of Ruth and Debbie, there are a lot of other characters in the series. Cherry “Junkchain” Bang is a stuntwoman turned trainer. Cherry worked for Sam on an exploitation film and had an affair with him before they had a falling out. Carmen “Machu Picchu” Wade is an extremely shy, heavyset woman who comes from a wrestling family that disapproves of her joining GLOW. Dawn and Stacey are a couple of hairstylists who come up with the tag team name of “The Beatdown Biddies.” Sheila the She-wolf is a disturbed young lady who lives her wrestling persona in every day life. And Arthie Premkumar is a pre-med student who takes on the role of “Beirut The Mad Bomber,” a take on a terrorist character that ends up getting her hurt. There are many other characters on the show, but these are a few that stood out to me.

GLOW is a very good show that unfortunately has as many fails as it has successes, in my eyes. I love the storytelling of the characters. Most of the characters were very easy to emotionally bond with and seeing them rise above their problems was very inspirational.

However, the main character, Ruth, failed in this respect. I just could not like her. Her character had no redeemable traits. She wrecked the marriage of Debbie with little regret until she was caught. She spends most of the series trying to decide if she is pretty enough to be a wrestler, which I feel like demeans her character. In wrestling, especially GLOW, you didn’t have to be pretty to be on the roster. You just needed to have talent. It seems like Ruth was written to just be a stereotypical, self-loathing chick who somehow finds confidence to feel pretty.

I also feel that while the writing for the other characters on the show was very well done, there just were too many characters to cram into each episode. With only 300 minutes of story time, only some of the characters were given the backstory and screentime they deserved. I wanted to find out more about some of the background characters who just seemed to be there to make the roster look larger. And with them trying to fit in the multiple story lines, it felt like most where lost in the shuffle.

I have to give GLOW three out of five stars. That really pains me, given my history and love for the sport of professional wrestling. But not being able to root for the main character, coupled with other characters not given enough story (which I found more interesting) made this show kinda hard to watch. I can only hope that in Season 2, they spend a little more time on some of the other characters and maybe give Ruth a little more personality.