Kholat Brings History and Horror Together

Welcome back to a new episode of #HauntLife. This week I am reviewing the indie survival horror game, Kholat, on PC. This game is available on Steam, Playstation 4 and Xbox One, so be sure to check it out if this review sways you that way.

As I have played lots of horror video games in the past, I find that many are rooted at least loosely in historical events. Silent Hill is somewhat based on the town of Centralia, Pennsylvania, where a coal mine fire has been burning underground since 1962, causing the town to be abandoned. Sir, You Are Being Hunted is a re-imagining of the real-life hunter/killer Richard Hansen (if you don’t know his story, it is worth a read, if those things interest you). And the classic game Fatal Frame holds true to the haunting at Himuro Mansion in Japan. But Kholat combines the horror aspect with a true unsolved mystery. I would like to thank the developers at IMGN.PRO for inviting me to review this game.

For those unfamiliar with the story behind Kholat, sit right back and I will enlighten you. Back in 1959, a group of nine college students from the Ural Polytechnical Institute went on a trip to the Ural Mountains. While their travel plans were deemed difficult, the crew was experienced in long ski tours and hiking. They came well prepared for the journey. During their journey, they made a mistake that took them slightly off course to the slope of Khloat Syakhl. Deciding not to move further until morning, the skiers set up a base camp and retired for the evening. It was the last night of their lives.

Weeks went by and no one had heard from the group. A search party was sent out to find them, and on February 26th, the horrifying discovery was made. The camp was found, completely ransacked. The students were not found, but their shoes and equipment was. It was determined that the tent had been cut open from the inside, and the group had fled the area quickly, without putting on their shoes or protective gear. The investigators followed the footprints and found the bodies of two of the hikers under a larger cedar tree. They had made a makeshift fire, but were only in their underwear and shoeless. Their hands where cut up, and it appeared they had tried to climb the tree frantically. Three more bodies were discovered between the tree and the camp, suggesting that they had attempted to find their way back to the base before they died. The final four bodies where not recovered until after the snow had melted off some. 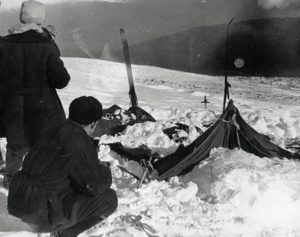 The tent where the hikers had stayed.

Autopsies of the bodies revealed extremely odd deaths. One of the hikers had a major skull fracture, and two others had chest fractures that were typically seen only in high-speed car crashes. However, none of these bodies showed any external damage. It appeared that the injuries happened internally due to high pressure being applied. Another body had its tongue, eyes, lips and some of its facial tissue removed. To this day, this mystery remains just that: an unsolved mystery.

This is where Kholat begins. In the game, you play a character who is retracing the journey of the ill-fated expedition. The open-world design means there are many ways to search — and get lost — in the forest, much like the team had done. Along the journey, you will find clues and notes that will help you piece together the events of that night. The overall feel of the game is extremely creepy.

As for gameplay, I have to say that the “open world” design, coupled with the fact that you are just dumped into the game with no real instructions on what to do, put a bad taste in my mouth from the start. After a pretty good opening, narrated by actor Sean Bean (no, he did not die during this), you just start in the middle of a train town. There is nothing to interact with here. I looked for someone to talk to and found none. I looked for doors to open, and found none. I spent easily 20 minutes just walking around aimlessly trying to figure out what to do. It was very frustrating, and honestly dull. Nothing scary about this, except the fact you have nothing to do except walk. No GPS. No map. Nothing to aid you or guide you into what to do. 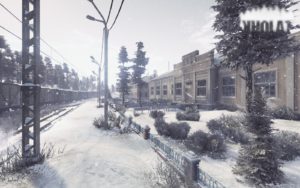 Once I found a path that actually had something to look at (bent trees always give it away), the pace picked up immediately. You find what appears to be the game rendition of the campsite, and then the weird and scary begins. In the middle of the night, you start your adventure by following glowing footsteps in the snow. And still I had nothing really to tell me what to do (maybe a tutorial would be nice here). I ended up dying very quickly. And after the stunningly boring opening area, I called it quits on the game for the night. Not a very well thought-out game plan from the developers here.

I jumped back in the next day, but realized I had not saved my “progress” and had to begin all over back at the train town. Lucky for me, I kinda remembered where to go, and made my way back to the camp fairly quickly. And soon I was right back in the middle of the story.

Where this game lacks in tutorials and game mechanics, it makes up for in stunning beauty. The world the development team has created is visually stunning, when you are not in the middle of a blizzard. The hauntingly beautiful music at the beginning also adds to the atmosphere of the game. The world sucks you in and immerses you in the environment. I do not have a VR headset, but I would love to see this game in virtual reality. 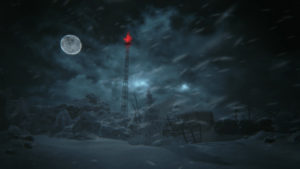 Regardless of its awesome story and visual beauty, I have to give Kholat three out of five stars. The lack of direction or tutorials in the beginning of the game really brings it down. I could see how many players would get bored quickly and ask for a refund on this game without giving it the shot it needs. Trust me, they do add some help after the opening area, but unless you can figure out where to go, you are going to get frustrated. I kinda get that the developers may want you to feel lost and hopeless, like the hikers probably did that night. But since this is not reality, many people will just walk away and never look back at the game. It’s a shame too, as it is a really good adventure, once it gets started.